The markets finished last week on a high.

Optimism was the catch cry for markets on Friday with a partial US-China trade deal, positive Brexit comments, further details on the Fed’s latest balance sheet expansion, and a stellar Canadian jobs print to boot. In the words of Foster the People’s 2010 hit, the market certainly had its share of “Pumped Up Kicks” on Friday. Stocks rose strongly with the S&P500 up 1.1% to 2.970. Yields also spiked higher with US 10yr yields +6.1bps to 1.73%. The biggest move in yields occurred in the UK with 10yr Gilts +11.6bps to 0.705% with positive Brexit developments driving. Those sentiments put a rocket under GBP with GBP some +1.9%, reaching a high of 1.2701. The other big FX mover was CAD with USD/CAD -0.6% to 1.3204 with a stellar Canadian jobs print paring expectations of a BoC rate cut. Other FX movers were more moderate with AUD +0.3% to 0.6788 and NZD +0.1% 0.6330.

The key question now is whether this optimism lasts

On the trade partial trade deal the only public commitments made were for China to buy more agricultural goods ($40-50bn annually) and for the US to suspend the latest increase in tariffs that was scheduled to come into effect this week (that being the existing 25% tariff to 30% on $250bn of goods). There were some high level soundings on Intellectual Property, Financial Services and the Currency, but no details were given. Importantly there was no roll-back of existing tariffs, further tariffs are still pencilled for December 15, while Huawei and other major issues underlying the conflict were not addressed – seemingly being pushed to ‘phase 2’ and beyond. While the partial deal was described by President Trump as a “substantial phase one deal”, the substance is more in the vein of an extension of the truce – still the best the market could have hoped for. As for formalising this phase of the deal, it is thought it could be signed off on the sidelines of the APEC Summit on 11-17 November.

Given continued uncertainty over the US-China relationship, it is unlikely the ‘partial deal’ will do much to given certainty to firms investment and hiring decisions in the US or elsewhere. As such it is still likely trade uncertainty will weigh on economic activity, and the longer the uncertainty lasts the greater the likely impact. Accordingly it is still very likely jobs growth in the US will continue to slow, with the Fed likely to cut rates to ward-off the headwinds. As for near-term FX implications, my colleague Ray Attrill noted in a weekend note that the deal does not provide a firm pretext for a sustained US dollar depreciation with the US still set to remain the least dirty shirt in the global laundry basket. Accordingly “with no wind-back of existing tariffs, there is no reason to expect USD/CNY to materially fall from here….[and] a 7.00-7.15 range looks probable in coming weeks”. As for the AUD, it does challenge our end of year forecast of 0.65 for now, though downside risks still remain given the likelihood of the RBA being forced down the path of near zero rates and ongoing uncertainty around trade (see attached note for details).

Optimistic headlines of a “breakthrough” drove a rocket under GBP, rising 1.9% and reaching a high of 1.2707. It was reported that PM Johnson had softened his position the Irish border. However, some of that optimism has faded this morning with GBP opening -0.3% to 1.2614 with weekend headlines downplaying the chances of a deal. The question really is now whether PM Johnson can bring the DUP on board if he softens his stance on the Irish border. The DUP’s Nigel Dodds warned that “Northern Ireland has to remain fully party of the UK customs union”, while the EU’s Barnier warned that plans were not yet good enough to be the basis for an agreement. This week will be crucial for Brexit with the UK-EU Summit on 17-18 October, followed by a special sitting of Parliament on Saturday 19, where Parliament could instruct PM Johnson to seek a Brexit extension and then call for fresh elections.

Also supporting Friday’s tone was the NY Fed announcing details of the Fed’s latest balance sheet expansion. The NY Fed said it plans to purchase Treasury bills at an initial pace of approximately $60 billion per month, starting with the period from mid-October to mid-November. In addition, at least through January of next year, the Desk will conduct overnight and term repo operations to ensure that the supply of reserves remains ample and to mitigate the risk of money market pressures (see NY Fed Announcement for details).

Data on Friday was also very strong with Canadian employment printing a strong 53k against expectations of 7.5k. The unemployment rate fell to 5.5% from 5.7%, while wages growth rose to 4.3% from 3.8%. The strong data saw markets pare their expectations of a BoC rate cut to only a 50% chance by October 2020, compared to being almost fully priced a few days prior. The other data point worth noting is the US Uni Michigan Consumer measure which unexpectedly rose to 96.0 from 93.2. The overall lift was driven by current conditions, though inflation expectations were very subdued at 2.2%.

A big week ahead domestically with the RBA Minutes on Tuesday and Employment data on Thursday. Across the Ditch NZ has Q3 CPI figures on Wednesday. Internationally Q3 earnings kick off on Tuesday with JPMorgan, Goldmans and Citigroup scheduled, while the first major tech companies to report are Netflix and IBM on Wednesday. Earnings will be under focus to help assess to what extent trade headwinds are weighing on profitability at a time of punchy equity valuations (expectations are for an EPS decline of around 3.1%). Brexit is also likely to come closer to some sort of resolution with the 17-18 October EU Summit scheduled along with a Saturday sitting of Parliament – NAB’s base case is for an extension and then fresh elections. Datawise, the IMF is releasing its latest set of forecasts on Tuesday, US Retail Sales are on Wednesday, while China has Q3 GDP figures and monthly activity indicators on Friday.

It is quiet domestically with no data scheduled. Internationally the Chinese Trade Balance and a speech by the BoE’s Cunliffe are probably the most likely market moving events: 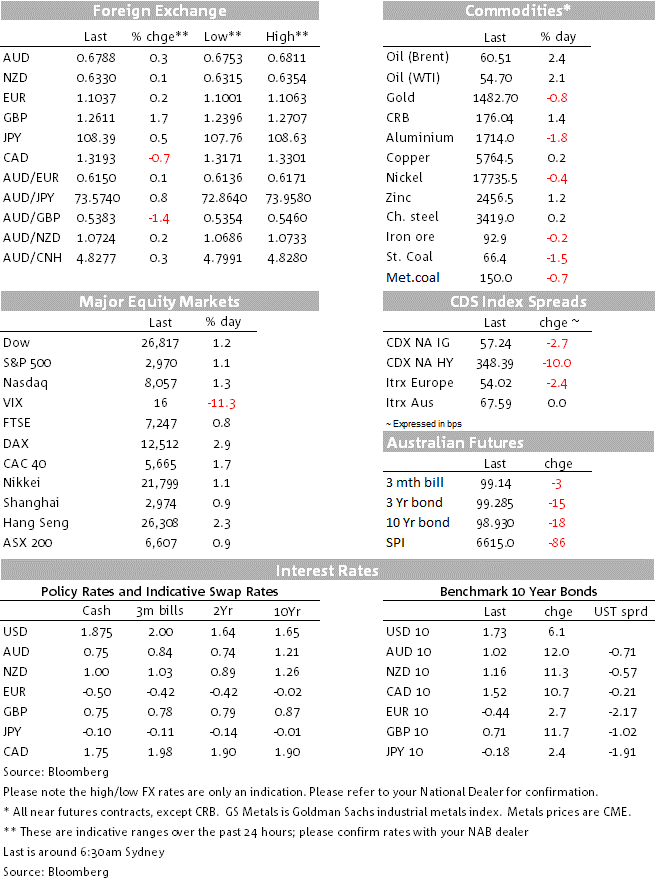