There’s been a lot of movement in equities and bonds.

Not often one gets to use an eponymous song title for this missive, so thank you Madonna (oh and POTUS). No pressure Rodrigo

President Trump has just about stolen the limelight from ECB President Mario Draghi, tweeting just before midnight Sydney time that “Had a very good telephone conversation with President Xi of China. We will be having an extended meeting next week at the G-20 in Japan. Our respective teams will begin talks prior to our meeting.” Trump has just confirmed these will start on Wednesday.

This doesn’t lead us to jump to a conclusion that we might soon see some of the existing tariffs on $260bn worth of Chinese imports scaled back, or that the current 90-day moratorium before Huawei formally enters the banned ‘Entity’ list preventing US firms from doing business with it will necessarily be extended.  But it does at least allow us to re-state what has been our base case for  a while now, namely that we won’t see Trump forging ahead with tariffs on the $300bn+ worth of Chinese imports not currently subject to tariffs.  On this, the 10-day hearing on Trump’s proposal to do just this is only into its second day, but the risk of a similar reaction by businesses to that seen in Monday’s Empire manufacturing survey is in our view a very distinct risk were he to proceed; to the point where it may well have been Trump who ‘blinked’ in reaching out to President Xi ahead of G-20.  Doubtless we’ll find out via the media from people ‘familiar with the matter’ in due course.

Wirth Trump and Xi now due to meet in Osaka at month end, the biggest threat of trade tariff escalation might now be the auto sector.  This after President Trump quickly railed against Mario’ Draghi’s Sintra speech in which the ECB President  made crystal clear that in the absence of an improvement in the outlook, further policy stimulus would be needed.  This, could include interest rate cuts, forward guidance, and/or more QE, where on the latter Draghi said that the ECB still had plenty of headroom to act. A subsequent ‘sources’ story from Bloomberg citing three ECB officials suggested that a rate cut is currently seen as the primary tool for new stimulus (and which, we’d note, did rank first in the order with which Mr Draghi laid out potential further easing measures).

Draghi also made a plea for more fiscal spending in the Europe – not from those without space to do so (a thinly veiled reference to Italy) but potentially via a centrally orchestrated pan-Eurozone stimulus programme. We won’t hold our breath on this one, especially given the new European Commission is not due to be sworn in until November 1st, and with Germany still gunning for a German (Manfred Weber) to succeed Jean-Claude Juncker as President of the Commission.

Trump’s response to Draghi’s speech (or perhaps just the Executive Summary thereof) was to say that “Mario Draghi just announced more stimulus could come, which immediately dropped the Euro against the Dollar, making it unfairly easier for them to compete against the USA. They have been getting away with this for years, along with China and others.  Draghi has already fired back saying monetary policy doesn’t target exchange rates, but Trump’s latest barbs need to be seen in the context of the recent Commerce Department proposals unveiled just last week that would permit it to levy countervailing tariffs on countries deemed to be undervaluing their currencies. We don’t think Trump ends up going there, but we don’t say this with a huge degree of conviction (and especially if Trump and Xi do strike a comprehensive trade deal in coming months, to then turn Trump’s focus elsewhere). .

Economics news of note overnight included a sharp deterioration in the German ZEW survey of financial analysts, where the expectations reading slumped to -21.1 from -2.1 in May (current situation to 7.8 from 8.2). Eurozone final may HICP say headline inflation revised to just 0.1% from 0.2% but the year-on-year rate remained at 1.2% as per preliminary, as did the core measure at 0.8%.  US housing starts fell by 0.9% against expectations 0.3% gain, but only because of an upward revision to April. Despite some recent patchiness, the housing market looks to be in reasonable shape these days, aided by much stronger mortgage applications off the back of the sharp fall in long term bond yields this year.

To markets and in currencies one immediate standout is a ‘key day reversal’ in AUD/EUR (also NZD/EUR) after eight consecutive down-days for the AUD cross and now more than 0.5% up in the past 24 hours.  AUD/USD hasn’t quite achieved the same feat, but it has bounced to within 3 pips of Tuesday’s pre-RBA Minutes high, to 0.6882. The NZD is the best performing G-10 currencies, firing back to life after losing a hefty 2.6% last week to be by far the biggest G-10 currency loser

EUR/USD losses post Draghi saw the paid down to a low of 1.1181 from 1.1240, following which it spent time back just above 1.12 but still mostly below into the NY close.  It softened only temporarily on the last GDT auction results which saw the price index fall by 3.8%, close to our resident BNZ cow-whisperer Doug Steel’s  estimate of a 4% reduction. He notes that the obvious weakness in pricing confirms the downward turn he’s been expecting and reinforces the cautious attitude about the 2019/20 milk price.

The slump in EUR/USD post-Draghi was enough to see the DXY dollar index poke above the 97.40-60 areas in which it has been meandering pre-FOMC, but only to a high of 97.77, still a way below the May cycle high of 98.73. That could all change of course come 4:00 AEST tomorrow or soon thereafter when the Fed delivers its latest Statement, new forecasts and chair Powell gives his post-meeting press conference. Incidentally, USD sentiment has not been helped by a Bloomberg report that the White House explored the legality of demoting Powell in February, soon after President Trump talked about firing him, according to ‘people familiar with the matter’.

In bonds, the 3.5bps decline in US 10-year Treasuries is largely a product of the 8bps decline in equivalent Bund yields; the latter to a new record low of -32bps post-Draghi. The Treasury Note yield actually got as low of 2.015% before pulling up on the aforementioned Trump-Xi G-20 meeting news.

US equities exploded out of the chute at the NYSE open on the Trump-Xi news , the S&P adding about 1.5% in the first hour of trading before easing back as the day wore on to close up 1% (Dow and NASDAQ both +1.4%).

Offshore tonight UK and Canada CPI are the data highlights; also of note European Commission President Junker speaks in Sintra – will he, post-Draghi, say anything about possible fiscal policy support for an ailing Eurozone economy if needed?

Then its eyes down overnight for the FOMC outcome, at 4:00 AEST Thursday (with Powell press conference to follow). At a minimum the market expects to read that the word ‘patience’ has been dropped from the statement by way of policy descriptor and that the ‘dot plot’ no longer shows the quarter-point tightening in 20120 implicit in the median dot.   Yet with markets still some 70% priced for a July cut, the Fed will have to be more dovish than this if a rates market sell-off and stronger US dollar is to be avoided. 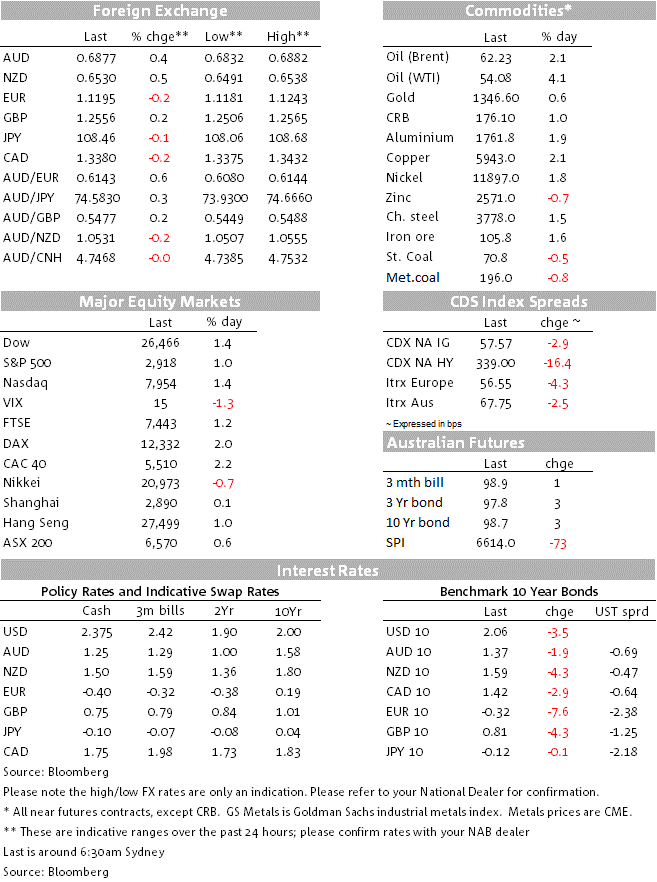