The Aussie dollar rose over 1.7 percent, helped by the gain in the Euro after leaders there reached an agreement on a European Rescue Plan.

Overview: Break on through (to the other side)

Big moves in currencies with AUD and NZD trading up clear through recent range highs and EUR/USD above 1.15 for the first time since October 2019, post agreement on the EU recovery fund and ongoing positive risk sentiment, though S&P and NASDAQ both fall into the NY close. Energy stocks at the vanguard of the earlier S&P/Dow rally amid $1+ gains for oil prices

It’s been a much bigger night for currencies than for either stocks or bonds. On the latter, US Treasuries are ending the New York day 1bp lower at 0.60%,the lowers closing level since April. US stock have ended up having a mixed night, the Dow finishing +0.6%, the S&P +0.2% and the NASDAQ ending -0.8%, following a period where the US technology sector has consistently outperformed all other global stock markets bar Shanghai.

It’s not entirely obvious why US stocks have underperformed somewhat, though following a day in the green for all European stock indices, there’s an obvious suggestion that following yesterday’s approval of the EUR750bn ‘next gen EU’ recovery fund, rotation out of US and into European stocks might be a theme that establishes legs in coming weeks.

A new point of focus for market now is the ‘cliff edge’ that the US faces as early as this weekend when the $600  weekly unemployment benefit paid under the Pandemic Unemployment Assistance component of the CARES Act is due to expire (leaving some who were eligible for payments under the PUA but not entitled to regular unemployment benefits, e.g. the self-employed, facing the imminent prospect of receiving nothing at all). On top of this is what will inevitable mad (and no doubt rancorous) dash to agree a new fiscal support plan before Congress foes into its August recess (including extension of the Paycheck Protection Program, a form of JobKeeper) where the allocated funds have almost been exhausted). The House is due to go into recess on July 31 and the Senate a week later on August 7. We are still awaiting detail of the Senate Republican proposals, that reports suggest will be in the order of $1n, which will then need to be reconciled with the House’ $3tn bill approved two months ago.

The big news yesterday outside Australia

Was the approval of four days and nights of talks of the ‘Next generation EU’ recovery fund, with a headline total of EUR750bn but where the amount to be allocated via grants was reduced from an original 500bn to 390bn, the rest via low interest loans. Various political log rolling involving budget rebates for the so called ‘frugal four’ and (very woolly sounding) mechanisms for calling time-outs on fund disbursements if one country believes conditions tied to hand-outs aren’t being met, got the deal over the line.  (pending approval from all 27 EU member state parliaments).

The big news has been the announced extension of both JobKeeper and JobSeeker yesterday. For the December quarter, the JobSeeker supplement will be reduced from $550 to $250 a fortnight (so the overall payment from $1,100 to $810) with as yet no extension beyond year-end.   JobKeeper will see the current $1500 per fortnight payment reduced to $1,200 for those who were working more than 20 hours per week and to $750 for those working under 20 hours and further reducing to $1,00 and $650 respectively for the March 2021 quarter.

RBA Governor Lowe’s Anika Foundation presentation failed to move markets with the Governor re-iterating the message form the July Board meeting Minutes published prior to his speech, that while policy could be adjusted in the future there is nothing to be done for now. Dr. Lowe pushed back hard against both negative interest rates and the notion of intervening in the FX market as potential additional policy options. On the latter, he noted that the RBA vis the currency as fundamentally fairly valued here and that in such circumstances would be fairly futile (as well as raising the ire of other nations). What was not rejected out of hand was the possibility of lowering the Cash Rate target to 10bp and/or increasing bond purchases beyond whatever was necessary to secure the 25bps 3-year government bond yield target, but neither policy look like they are anywhere close to the centre of the RBA’s radar at present.

The AUD has been the standout gainer in the last 24 hours. It was pressing the topside of the June-July range when we left off yesterday and once the 0.7050-area range top was convincingly broken, stormed to a high of 0.7147, its best level since 19 April.

NZD has also punched above its previous 0.66 effective range high to just shy of 0.6650, its best level since the start of June. And following an initial ‘sell the news’ response to the approval of the EU recovery fund, EUR/USD has trade up to as high as 1.1540. It was last there back in early October 2019.

Suffice to say these moves have seen the narrow DXY dollar index break convincingly below its June-Jul range low (latter around 95.75, 95.16 now) and down 0.64% on the day. Ditto the broader BBDXY index. 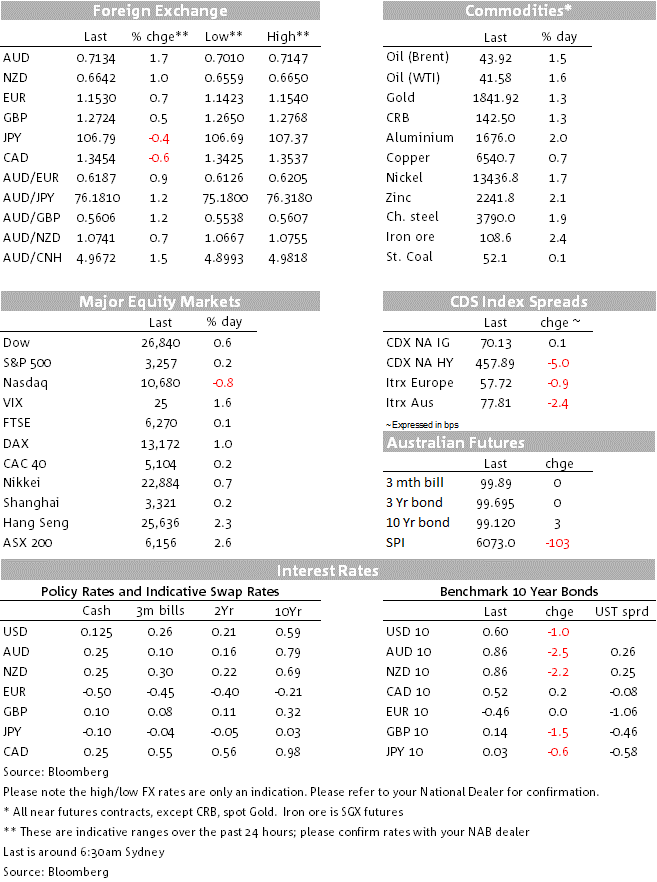