Had to have high, high hopes for a living, Didn’t know how but I always had a feeling

I was gonna be that one in a million, Always had high, high hopes –  Panic at the Disco

Tech shares are once again leading the charge in equities

But the market has also been boosted by high hopes on the COVID-19 vaccine front as well as on the political side with European leaders edging towards an agreement on the EU recovery fund.

The USD is broadly weaker with the improvement in sentiment favouring growth and commodity linked currencies.

In addition to the tech/stay at home trade

Market sentiment has also been boosted by encouraging vaccine developments and news that European leaders are edging towards an agreement on the EU recovery fund.

The FT reported that a coronavirus vaccine being developed by Oxford university and AstraZeneca has shown promise in an early trial. The vaccine generated “robust immune responses” and was “tolerated” among all patients in the study, AstraZeneca said on Monday. The news helped AstraZeneca’s shares jump over 5% at one point, but an underwhelming  Bernstein analyst report triggered a massive U turn with the shares ending the day down just under 1%. While the analyst’s report reiterated AstraZeneca’s positive results, it concluded the benefits didn’t appear to match the bar set by programs from Pfizer, BioNtech SE and  Moderna.

Early in the session

Pfizer and BioNtech had announced positive results from their Covid-19 vaccine trial in Germany, which added to the promising results reported earlier this month. Elsewhere, little-known UK pharmaceutical firm Synairgen saw its share price rise more than 400% after it claimed that its COVID-19 treatment drug reduced the rate of people in hospital needing intensive care

Sticking with the virus news

The US reported a 1.3% rise in virus cases, slowest daily increase in two weeks. This is promising outcome as it suggest the peak rate of infection could be behind us. New York Governor  Cuomo warned that he may be forced to close down all bars and restaurants if large street gatherings continue and his social distance and mask regulations aren’t enforced and encouragingly California reported slowing down in virus hospitalisation numbers .

Also supporting market sentiment were signs that European leaders were edging closer to a compromise agreement on the proposed Recovery Fund.  Leaders have reportedly agreed to €390b of the €750b fund being allocated to grants to vulnerable countries, with the remainder being low interest rate loans.  The countries now need to agree on other issues such as climate change targets and a proposal to link payments to countries following the ‘rule of law’, which Poland and Hungary are opposed to.

European equity markets were up 0.5% to 1%.  The 10-year Italy-Germany bond spreads narrowed to around 155bps, its lowest level since February and indicative of less perceived credit risk in Italy.

News of a EU Fund compromise hit the screens close to the end of our session yesterday 68, and helped the euro trade to 1.1468, its highest level since March and the pair now trades at 1.1444. There’s growing confidence that the downside risk for the euro is now limited on the basis that we are headed toward some kind of deal. So the big picture is that Europe is making a huge step toward a fiscal union – now the debate shifts towards the conditionality around the fund, so the upside for the euro is a little bit more uncertain.

The broad improvement in risk appetite, plus the euro strength see the USD mildly weaker across the board ( BBDXY is – 0.15%) with JPY (-0.21%) and CHF (-0.10%), the preeminent safe haven currencies the USD underperformers.

Somewhat surprising GBP is at the top of the leader board, up 0.72% notwithstanding news that the UK has suspended its extradition treaty with Hong Kong and placed it under an arms embargo in moves likely to exacerbate a diplomatic spat with China after it imposed a new security law on the former British colony

The AUD and NZD have benefited from the improvement in risk sentiment with both pairs up around 0.30% relative to trading level this time yesterday. AUD now trades at 0.7016 and NZD is at 0.6577.

AU press are reporting that Prime Minister Morison will be announcing changes to the JobKeeper and JobSeeker payments today, rather than Thursday by Treasurer Frydenberg in his economic/budget statement ( see here and here).  The good news is that the JobKeeper and JobSeeker will be extended beyond their original September deadline, but the income support will be set at a lower rate with stricter eligibility tests.

The JobKeeper payment is to be changed after September from a flat $1,500/fortnight payment, to two tiers of payment to more closely reflect the incomes of people before the crisis struck. Companies will also be required to report their turnover in order to continue to qualify for the income support. The $550/fortnightly supplement to the JobSeeker payment is also to be cut, though no specifics as yet on quantum.

Republicans and the US administration have started talks over another US fiscal stimulus package, with Trump’s chief of staff saying they were looking at a plan in the “trillion dollar range.”  Republicans want to modify the enhanced unemployment benefits, which give an extra $600 per week until the end of the month, to ensure those claiming don’t receive more than they would earned from employment.  The administration is also proposing a payroll tax cut which is likely to meet heavy resistance from Democrats.  It remains to be seen whether the two political parties can agree a package over the next two weeks, before the enhanced unemployment benefits end and summer recess begins. 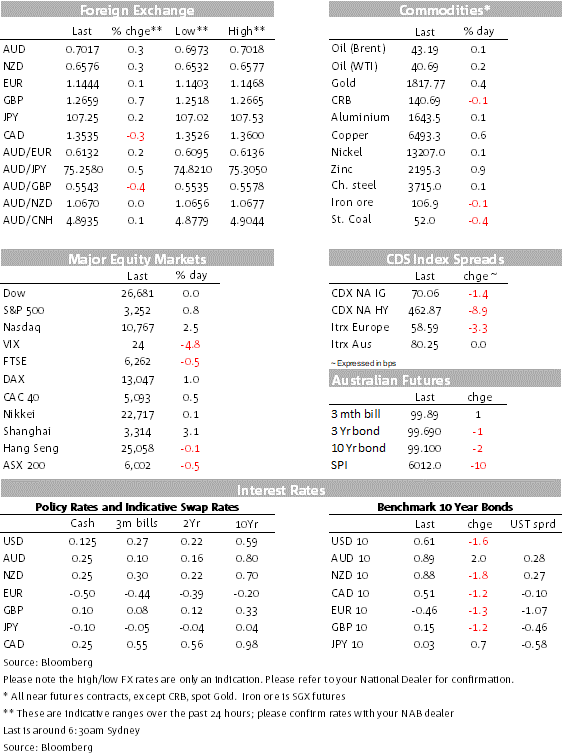