Get ready for a busy 24 hours.

Overview: Something got me started

Something got me started, you know that I will love you. Lately since we parted, I truly know that I need you – Simply Red

Mixed earnings alongside a series of Trump Tweets and comments against China kept equity markets on the back foot for a second day in a row ahead of the FOMC rates decision early tomorrow morning. While US trade representatives resume negotiations with Chinese counterparts in Shanghai, President Trump has been busy complaining China is not buying US agricultural products while also reiterating claims that China continues to “ripoff” the US. Ahead of a busy day of data releases and events moves in rates and FX markets have been relatively subdued. Overnight the pound consolidated yesterday’s decline while the AUD and NZ continue to drift lower ahead of Australia’s Q2 CPI release this morning.

It is unclear what triggered President Trump new round of tweets against China, but maybe what did the trick was news early in the overnight session noting that US soybean exports to China had collapsed in the first half of the year to the lowest level in more than a decade alongside another fall in pork sales in June. This would seem like a pretty good guess given Trump’s tweets “China is doing very badly, worst year in 27 — was supposed to start buying our agricultural product now — no signs that they are doing so,” adding that “That is the problem with China, they just don’t come through.”. Later on when leaving the White House, the President told the media that “we’re either going to make a great deal or we’re not going to make a deal at all.” Adding that Beijing is willing to make concessions in trade talks but he’s not sure if he will accept them and that the decision on reaching a deal is up to him and not China.

Whether or not soybeans were the trigger, we will never now, but it is certainly not a great look as US trade negotiators enter a second day of negotiations in Shanghai. The only positive thing we can say for now is that the two parties are still willing to carry on talking, Treasury Secretary Steven Mnuchin and Trade Representative Robert Lighthizer are expected continue talks today, but expectations of a compromise are very low with Chinese media stressing the need for the US to meet China “halfway”.

President Trump tweets hit European equities ahead of the US open and didn’t have a chance to recover with the Eurostoxx 600 index falling 1.5% while the German DAX closed 2.2%. The S&P500 futures contract was 0.85% lower around the time of the cash market open after Trump’s tweets, but the index managed to hold the 3,000 level and recovered most of that earlier fall (closing the day at -0.26%). Energy shares (+1.3%) helped support the recovery in the S&P500 after a near 2% rise in US WTI crude. In earnings news retailer Under Armour shares fell after warning about weak sales, while Procter & Gamble and Merck gained on strong results. After the bell Apple projected better than expected revenue in the current quarter, signalling optimism about potential sales of the new iPhone models.

The 10 year US Treasury yield fell 2bps to 2.04% following the Trump tweets, but the recovery in equities alongside stronger than expected consumer confidence data helped yields recover to their previous levels.  The Conference Board consumer confidence index was significantly stronger than the market consensus and rose back to near the highs of the current cycle, lifted by both consumers current assessment and future expectations.  Evidently, US consumers are more focused on the strength in the stock market (and their 401ks) and the labour market than the ongoing trade war, which has hit the manufacturing sector hard.  The survey’s so-called ‘jobs differential’, which measures the difference between those reporting jobs as ‘plentiful’ and those ‘hard to get’, widened to +33.4, also near the highest levels of the highs of the cycle, and consistent with the unemployment rate remaining very low.

Elsewhere, the US core PCE deflator met expectations at 0.2% in June (0.248% unrounded) but revisions to prior months meant the year-on-year pace of inflation was less than expected, at 1.6% (albeit foreshadowed by the advanced Q2 GDP report).  Below-target US inflation which now has persisted for a bit longer than what the Fed expected  should strengthen the case for the Fed to announce an insurance cut early tomorrow morning (see more below).

In FX land USD indices have essentially tracked sideways (DXY @98.07) with JPY (@ ¥108.61) and EUR (1.1156) little changed. Meanwhile after falling sharply during our APAC session yesterday, the British pound consolidated those losses overnight (-0.56% to 1.2151) with little new news on the Brexit front. Concerns around a no-deal scenario and new elections continue to weigh on the GBP.  UK gilt yields have again outperformed (10y -2bps to 0.63%) as the market starts to place a greater risk to the downside economic scenario of a no-deal and new BoE easing measures (even though BoE Governor Carney has been more cagey about how much policy stimulus the Bank would be able to provide, given the potential inflationary impact).

Antipodean currencies are the other notable movers with AUD leading the declines down another 0.39% over the past 24 hours and now trading at 0.6874. If the pair gets past its mid-June low of 0.6832, the market is likely to consider the January 3 flash crash low of 0.6741 as the next key level to watch. Ahead of the FOMC tomorrow morning, Australia CPI and China PMI’s are the data releases to watch ( see more below). The NZD now trades at 0.6614 (-0.29%) and since reaching a three and a half month high in the middle of the month, it has now fallen for four consecutive sessions, and seven of the last eight. The ANZ business survey is released today and we’re not expecting any major pick-up to the activity indicators, which remain at subdued levels.

In other news, China’s Politburo, the Communist Party’s top ruling body, met yesterday to review economic performance in the first six months and discuss plans for the second half. Policy makers pledged to tackle ongoing tensions over trade “effectively” , but didn’t make any major policy stimulus announcements. Notably too the statement also that the property sector will not be used as a way of stimulating the economy.

Our BNZ colleagues suspect the survey’s confidence reading will remain heavily negative, its activity indicators below par, and its inflation indicators fair to middling. The survey’s residential construction outlook is also going to be of some interest after plunging in May and not rebounding in June

Core inflation is expected to remain subdued in Q2.  We forecast the RBA’s preferred measure of core inflation – the trimmed mean CPI – to increase by 0.4% in the quarter, which would see annual inflation ease to 1.5%, matching the multi-decade low reached in 2016.  Headline inflation should also increase by 0.4%, up 1.4% over the year, with the risk it might be slightly higher than our estimate.  If our forecasts prove correct, the Reserve Bank will be under pressure to downgrade its near-term outlook for inflation in the August Statement on Monetary Policy.

Expectations are for China’s official manufacturing PMI to stay in contractionary mode in July ( 49.6 exp. vs 49.4 prev.) and with the latest round of US tariffs still working their way through the Chinese economy our senses is that more subdued readings are likely over the coming months.

China’s non-manufacturing PMI is expected to remain at a healthy expansionary level of 54 vs 54.2 prev. as it has been the case in other major economies.

In line with recent activity indicators, the EU quarterly growth is expected to halve to 0.2% and annual growth should print at 1.0%.  Meanwhile EU CPI is expected to show core inflation ticking down to 1.0%. Declining EU core inflation readings drifting further away from target against a backdrop of anaemic GDP growth, is not really new news, still tonight’s data should further strengthen the case for the ECB to do more. The ECB September meeting can’t come soon enough

A 25bps rate cut by the FOMC looks like a done deal. On paper, one rate cut doesn’t look enough to militate against the outstanding risks – namely tame inflation, weak business investment, and the uncertainties created by trade tensions and weakness in the global economy, so we remain comfortable in our view that another cut will follow in September, while the risk of a third cut later in the year remains very much alive. Given this context and market pricing that currently sees the funds rate ~0.75% lower than current levels by the end of January next year, the FOMC’s Statement and Fed Chair Powell messaging at the press conference will be just as important as the rate announcement. We expect the Statement to keep the line that the committee “will closely monitor the implications of incoming information for the economic outlook and will act as appropriate to sustain the expansion”. The Fed is also expected to end its balance sheet reduction – so-called ‘quantitative tightening’ this month (earlier than previously planned). 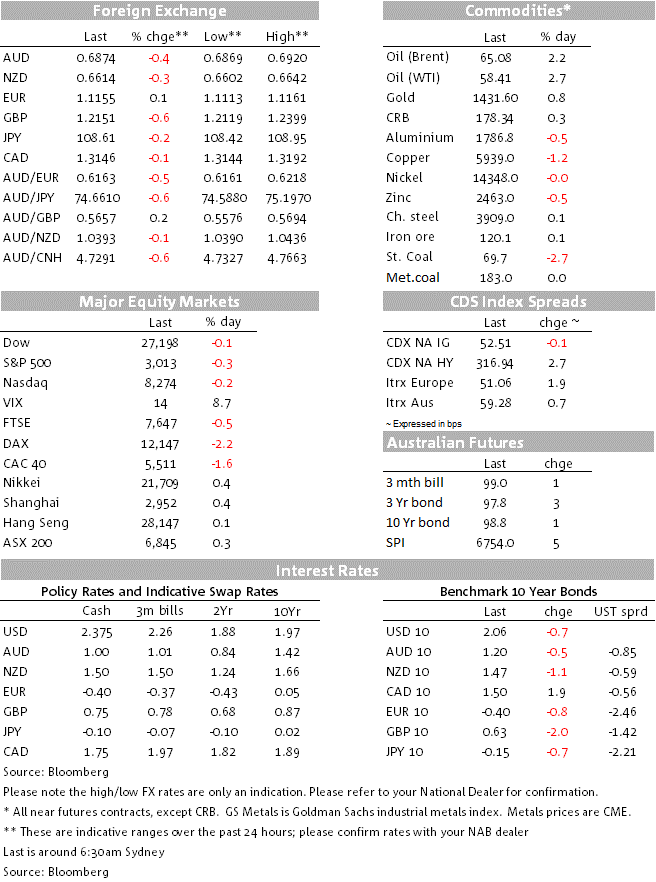