Does the message from the US Fed set the right tone given sensitivities in the markets right now?

Overview: Oops! I did it again

In the face of increasingly shrill protestation from the US President but with support from the Wall Street Journal and a few prominent hedge fund managers, the Fed delivered on pre-meeting consensus expectations and lifted its Fed Funds rate target by 25bps to a range of 2.25-2.50%. The interest rate it pays on excess reserves (IOER) rises by just 20bps, also as expected and in an effort to steer the effective Fed Funds rate back to nearer the middle than the top of the target band.

The widely watched ‘Dots’ signifying the expectations of individual FOMC members based on their own forecasts for how they see the economy evolving in the years ahead, sees the median dot lowered by 25bps for each of 2019, 2020, 2021 and also in the ‘longer run’ (the latter representing estimates of the so called ‘neutral’ rate).  No real surprises here either

What was a bit surprising is that the post meting statement says that ‘some further gradual increases (my emphasis) in the target range for the federal fund rate will be consistent….”.  The expectation here was that all reference to ‘gradual’ could be dropped, significantly a formal end to the Fed being on ‘auto-pilot’ with respect to its rate rise cycle to date, as long as the economy and inflation were broadly performing as expected.

We’d nevertheless judge that the Fed has now moved into fairly full-blown ‘data dependency mode. Indeed, Fed chair Powell has said as much in his press conference in noting that the Funds rate has reached what the committee regards as the lower edge of the range of estimates of the ‘neutral rate.  The Fed can be more patient going forward, Powell says, in part because of an acknowledgement that inflation is slightly undershooting Fed projections. Here, for 2019 the Fed now has PCE inflation at 1.9% down from 2% in September (the 2019 GDP growth forecast is lowered to 2.3% from 2.5%).

Also of note in the statement was the sentence that the Fed ‘will continue to monitor global economic and financial developments’ – a clear sop to recent equity market weakness (and, as Powell notes, tighter financial conditions) and signs of slower growth abroad.  So ‘data dependency’ clearly has a somewhat broader definition than just the hard incoming domestic economic prints.

US equities had rallied into the Fed seemingly in anticipation of a ‘dovish hike’ from the Fed, or perhaps even a ‘no hike’ Fed, so on the basis this was not quite as dovish an outcome as markets were primed for stocks fully reversed their gains – and then some.  A 0.75% gain in the S&P into the Fed is now a near 2% loss with half an hour of trade to go.  Earlier, European stocks markets closed higher across the board, the Eurostoxx 50 +0.4%.

The US dollar was softer into the Fed and stronger out of it, DXY at 96.56 beforehand and 97.0 now, so roughly half a percent higher. EUR/USD has given back all the European session gains, and which were helped not just by broader US dollar slippage but Italy and the EC formally settling their differences on the stance of fiscal policy next year. This saw Italian 10 year bond yields some 17bps lower and testing 2.75%. At the start of December they were close to 3.25%.

AUD/USD is currently the weakest G10 currency of the last 24 hours. Having failed to break back above 0.72 pre Fed, we saw some pressure on the Aussie on news that the US had lifted sanctions on Russian aluminium producer Rusal. This saw aluminium prices drop quite sharply.  Aluminium has since recovered but the AUD has not, now trading below 0.7100 and to its lowest since November 1st.

Our short term fair value model estimate for AUD/USD currently sits just below 0.70 and with the Fed out of the way and risk sentiment still sour, chances of a significant bounce into year-end look pretty slim.

US Treasury yields were lower into the Fed, higher immediately out of it but now smartly lower in the slipstream of sharply falling US stocks.  10 year Treasuries have been pressing 2.75% from 2.825% pre-Fed and 2s a low of 2.62% from 2.66% (pulling back up a little as I write on a small bounce in equities).

Italy was the earlier star turn in Europe (see FX above)

Oil has enjoyed a small bounce seemingly on optimistic soundings from Saudi Arabia on the oil supply/demand balance next year, though positioning is probably also a factor as too a softer USD into the Fed.

Aluminium had fallen back on the Rusal news (see FX above) but since recovered to be 0.1% higher on the day with the LMEX index also a touch firmer with most hard commodities – including iron ore and coking coal – currently showing gains on the day.

Australia’s November labour Force Report is due at 11:30 AEDT and, aside from the (increasingly important) credit numbers on December 31 is the last major piece of domestic economic news for 2019.

NAB expects employment grew by 20k in November and that the unemployment rate stayed at 5% (alongside an unchanged part. rate. The recent NAB Business Survey suggests that trend employment growth remains around 20k per month, while our internal employment indicator wants +25k.

Before that at 08:45 we get New Zealand’s Q3 GDP report. We expect this to register a 0.6% quarterly increase, after the surprisingly solid expansion of 1.0% it logged for Q2. However, this would leave the annual rate of growth at 2.8%, which might be the better way of interpreting things. The RBNZ’s November Monetary Policy Statement anticipated a 0.7% Q3 increase. The November NZ trade balance is due at the same time.

The BoJ meets today but with no new forecasts until January, it should pass without incident.

Tonight sees UK retail sales, the Bank of England’s latest policy decision (no change confidently expected) and UK retail sales and in the US, the Philly Fed survey and weekly jobless claims 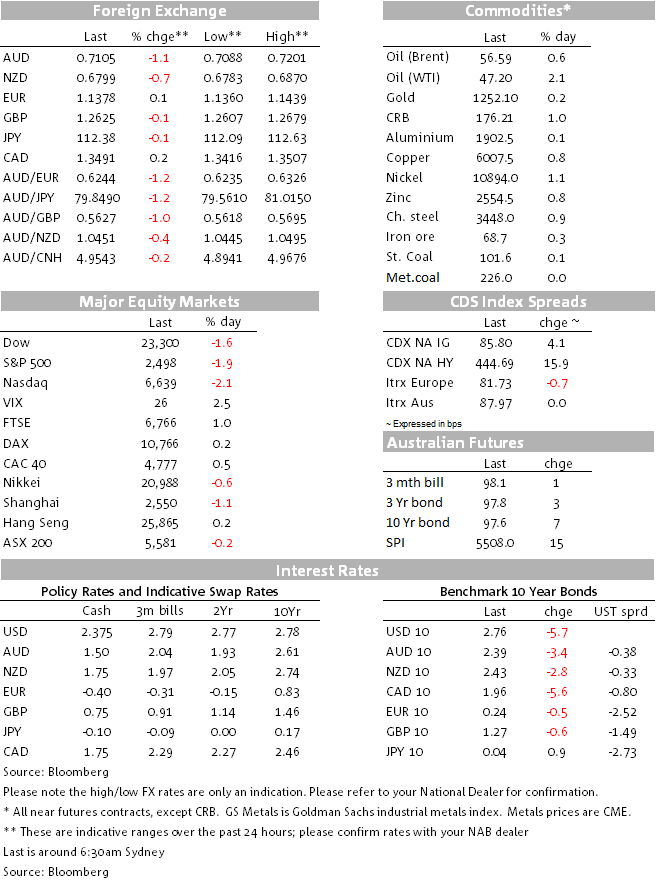