Markets Today: Finding the shape of the new abnormal

Overview: Don’t stop ’til you get enough

You know, I was, I was wondering, you know If you could keep on, Because the forceI t’s got a lot of power

Keep on with the force don’t stop, Don’t stop ’til you get enough – Michael Jackson

Well the force coming from hopes for a COVID-19 vaccine keeps on outdoing concerns emanating from heightened geopolitical tensions and new lockdown measures. European and US equities have had a rewarding night boosted by AstraZeneca and yesterday’s Modena vaccine news, core yields are little changed and the USD is broadly weaker while commodity link currencies outperform. Oil is also up boosted by a decline in US stock piles, despite OPEC+ plan to increase output in August.

European and US equities have been boosted following yet another piece of positive news over the potential of a COVID-19 vaccine. US equities gained between 0.55% and 0.91% while major European equity indices closed with gains close to 2%. Yesterday we had news from Modena reporting promising trial results on its experimental vaccine for COVID-19. These showed that it induced antibodies in all 45 of those tested, a key test of whether it is likely to be effective, albeit with side effects for some.  Moderna’s share price rose 8.33% overnight, bringing its cumulative gain since the end of last week to 31%.

This positive vaccine vibes were further boosted overnight after ITV’s ( UK TV Channel) Robert Peston said in a tweet that a University of Oxford’s vaccine trial will report “positive news,”, adding that “The vaccine is generating the kind of antibody and T-cell (killer cell) response that the researchers would hope to see,”. The tweet triggered a jump in AstraZeneca shares (5.47%) and provided a broad based boost of optimism across the market. The Stoxx Europe 600 Index climbed 1.8%, its biggest daily gain since July 2 and health-care companies advanced 2.6%, with the subgroup posting its best day since late May.

US equity markets embraced the positive vibes coming from Europe at the open. News suggesting President Trump has ruled out additional sanctions on top Chinese officials for now as he doesn’t want to further escalate tensions with Beijing also helped sentiment. However, this positive mood was somewhat dented later in the day, following comments from the US Secretary of State.

Pompeo said the US will impose visa restrictions on some employees of Huawei over the Chinese Communist Party’s human rights abuses, including against Muslims and other minorities. He then warned that “Telecommunications companies around the world should consider themselves on notice: If they are doing business with Huawei, they are doing business with human rights abusers,”.

US Energy stocks were among the outperformers, boosted by the move up in oil price (more below) while Banks also did well ( S&P sector +2.85%) following much better-than-expected earnings from Goldman Sachs.  Like Citi and JPM yesterday, Goldman saw a big increase in trading revenues and other capital markets activity but, unlike those two commercial banks, its earnings weren’t weighed down to the same extent by loan-loss provisions.  Debt issuance boomed in Q2, as the primary market reopened and companies sought to increase liquidity.   Banks performance and earnings reports has triggered a number of articles noting how Fed and government policy has disproportionately help Wall Street relative to Main Street.

Virus news hasn’t had a major impact on markets

New restrictions have been imposed in many US states with Alabama joining other states requiring face masks after the it reported a pandemic-high of 40 deaths in a single day. Walmart will require customers to wear masks inside all of its US Walmart and Sam’s Club stores starting July 20 and after the bell Texas reported 10,791 new coronavirus cases, a setting a new  daily record. Meanwhile, yesterday Tokyo raised its alert level for COVID-19 to its highest level, with officials citing a greater spread of the virus (there were 165 new cases in Wednesday in Tokyo).  However, the Governor said she was averse to implementing a widespread lockdown, instead favouring targeted measures to control its spread.

The USD is down both in index term ( BBDXY -0.32% and DXY -.022%) and against most currencies with CHF, a safe haven pair, the one exception within G10. The broad improvement in risk appetite has eroded the appeal for USD.

Commodity linked currencies are sitting at the top of the leader board. NOK is up 1.41%, boosted by the move up in oil prices. WTI and Brent are up around 1.70% boosted by news a US government report showing crude stockpiles tumbled the most since December and notwithstanding  OPEC+ alliance confirmation of their intention to taper output cuts in August aid their expectations for rising oil global demand.

Economic data over the past 24 hours has generally been positive, but not market moving

Industrial production in the US rose more than expected in June (but the level of activity remains almost 11% below pre-COVID levels. The NY Fed’s Empire manufacturing survey was also stronger than expected, returning to positive territory, which bodes well for the nationwide ISM index which is released early next month.  The Fed’s Beige Book reported that economic activity had increased at the start of the month but it was well below what it was before the crisis. Of note too, Loan demand was flat outside of some Paycheck Protection Program (PPP) activity and increased residential mortgages.

The Bank of Canada said it wouldn’t raise its cash rate “until economic slack is absorbed so that the 2% inflation target is sustainably achieved.”  Governor Macklem said that was likely to be at least two years.  The BoC said it would continue with its QE bond buying, at a rate of at least $5b per week, until the recovery was “well underway” .  Meanwhile, the Bank of Japan kept its policy settings – including its cash rate and its 10-year yield target – unchanged at its monetary policy meeting yesterday.   Governor Kuroda reiterated that the Bank was prepared to take further action if required, although the bank has appeared reluctant to take its cash rate further negative despite the unprecedented economic shock.

Global rates are again little changed and remain confined to exceptionally tight trading ranges.  The 10-year Treasury yield is trading at 0.63% this morning, marginally higher than where it closed yesterday.  Rates markets continue to portray a less optimistic economic outlook than equity markets.

Once the jobkeeper support is considered Australia’s real unemployment rate is probably around 13.3% – almost double the official figure. Given this complication, our economists think the hours worked series is a better measure to capture the true shock to the labour market and economy. Hours worked fell 10.2% between March and May, but should have risen quite nicely in June as employment began to recover thanks to the lifting of restrictions and rise in activity.

Unfortunately, any improvement in the labour market in June needs to be consider with some cautiousness as the numbers will not reflect the new lockdown of Melbourne and the Victorian region of Mitchell Shire. 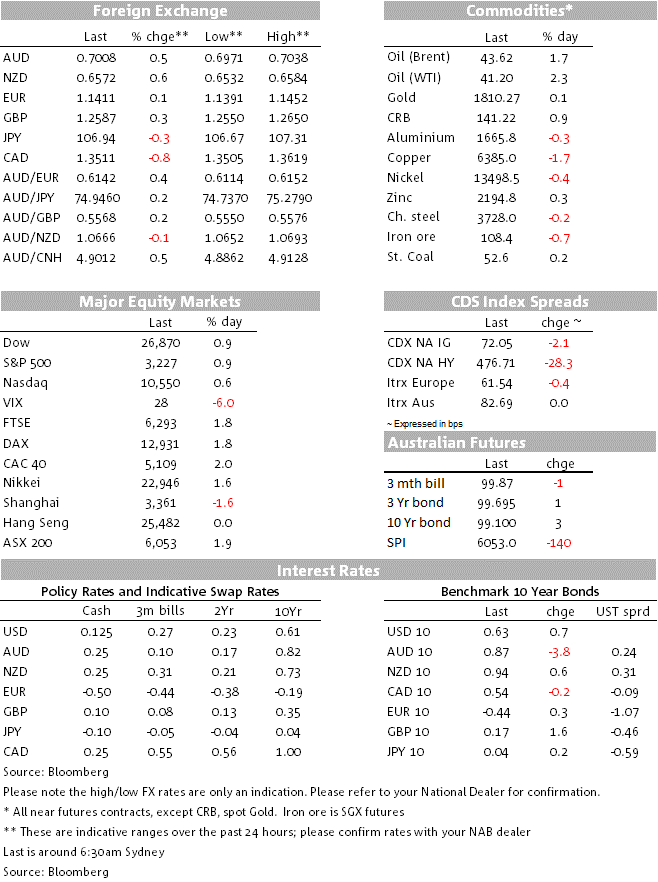 KangaNews Survey of Australian Fixed Income Investors: The annual KangaNews survey is now open. If you are an Australian-based Fixed Income Investor and value the research provided by NAB’s Economics, Fixed Income (ACGB, Semi, Swap and Credit), Securitisation, Commodities and FX teams, could you please participate in this year’s poll at the following link VOTE HERE. Please note that this survey encourages all participants to vote, not just one vote per institution.