It’s not often that monthly US personal income and spending figures grab the headlines, but weak August numbers did last night in the context of no deal as yet on a new fiscal support package, despite which US equities have had another positive night, tech. stocks in particular.

The Main Street/Wall Street disconnect lives and breathes. Currency moves have ben slight since we left off yesterday, meaning the USD has maintained its softer tone while AUD has held its gains, oscillating either side of 0.72. It is looking like a quiet run in to the weekend, ahead of tonight’s US employment data, the last before the US elections.

US Manufacturing ISM numbers would ordinarily be the keynote economic news on the day of their release, but the Financial Times is currently leading with a report on the August Personal income and Spending data, albeit not wildly different from expectations. Incomes fell by 2.7% in August (-2.5% expected) equivalent to $543.5bn, while spending rose by 1.0% (0.8% expected), meaning that savings were drawn down to maintain consumption following the expiry of enhanced unemployment benefit schemes and the Executive orders that maintained them for a while albeit at lower levels. The savings rate fell to 14.1% from 17.7%.

The data highlights the imperative of a new fiscal support package if consumption is not to derail the economic recovery in Q4, yet overnight we have no sign of progress towards reconciliation between the Democrats and the White House even though both sides continue to express optimism on the ability to reach a compromise. One amongst other sticking points remains the Democrat’s proposals for $436b in local and state government aid, which the Republicans see as a bail out for poorly run (Democrat controlled) states and local authorities..

Markets surely remain susceptible to the lack of a deal this side of the 3 November elections, but US equities evidently aren’t showing much concern at the moment, the S&P closing with a gain of 0.5% and the NASDAQ up 1.4%. That said, energy, materials and industrial, three of the most growth sensitive sub-sectors, are all in the red.

The manufacturing ISM index dipped to 55.4  from 56.0 against an expected rise to 56.5, led by a fall back in new orders to 60.2 from 67.6 (65.2 expected). Weekly initial jobless claims came in at 837k, just below the 850k expected and down from 873k the week before (numbers which are nevertheless still suggesting that the strengthening of the labour market earlier in Q3 has effectively stalled).

Betting markets see the odds of a Biden victory narrowing (to $1.67 from $1.78 and a Trump win out to $2.57 from $2.35 in one of the bookies) and the probability of the Democrats winning back control of the Senate as well as retaining the House rising, to 60% from 55% pre-debate.

Yesterday’s APAC session slippage in the USD and modest gains for most currencies including AUD and NZD, have by and large been maintained. AUD/USD has spent time above 0.72 (high of 0.7209) and NZD time above 0.6650 (high of 0.6657) but AUD is back down to 0.7187 coming into the New York close, pretty much where we left it yesterday evening. Helping the cause of AUD and NZD in the last 24 hours has been the renewed appreciation in CNH/CNY at the beginning of the Oct 1-8 China holidays and where the juicy carry on long RMB positions over this period is one factor. USD/CNH is currently sub-6.75, down three and a half big figures on the day.

One exception has been GBP which has had a whippy night

GBP/USD trading within a wide 1.2820-1.2980 effective range (1.2890 now). The European Commission began legal proceedings against the UK over PM Johnson’s plan to override key parts of the Withdrawal Agreement. A letter of formal notice was sent, which kicks off the legal progress that could ultimately end up adjudicated by the European Court of Justice. GBP plunged on the announcement, but soon recovered, before weakening again. The EC sends out dozens of these notices each month and most disputes are settled before reaching the ECJ. The Dutch PM played down the letter and said that it “should not too much influence the negotiations with the UK”.

As for Brexit negotiations

Bloomberg reported sources saying there has been no decision yet on whether enough progress has been made to enter the crucial “tunnel stage”, referring to the drafting of final text under tight conditions that control any outside leaks. The FT noted EU diplomats saying they did not expect to enter the tunnel until after the mid-October EU summit, contrary to the more optimistic view given from the UK side.

Another poor night for oil, still plagued by demand concerns, WTI and Brent crudes both down by about $1.5 or 3.5%. Industrial metals have been mixed though an gold is up 1% or around $20. Late yesterday the RBA reported that its SDR-denominated commodity price index rose by 1.5% in August. Old news, but conformation of the commodity price tailwinds behind the AUD’s recovery off its March lows. 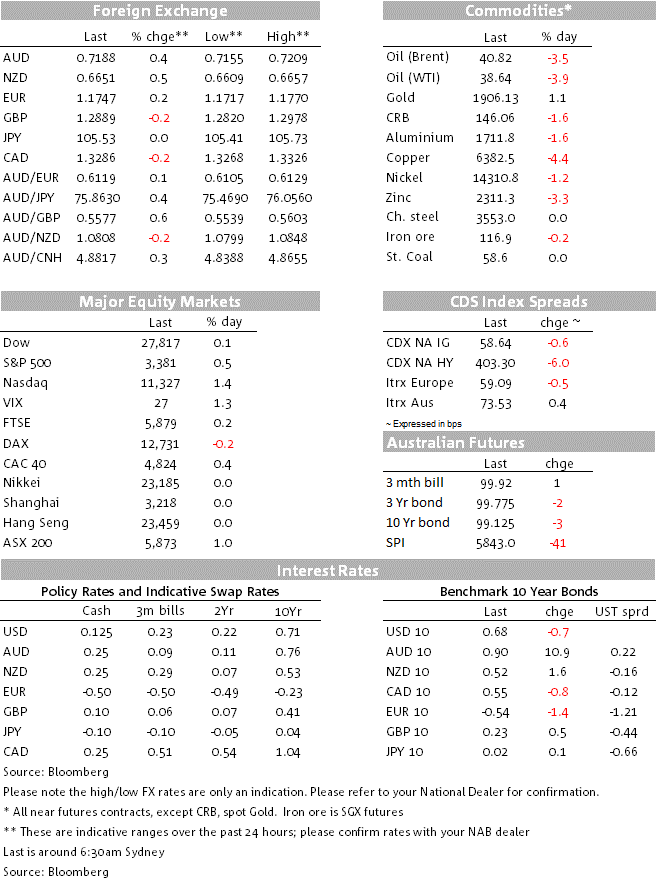