Equities are on the rise in the US and Europe.

Overview:  Back on top

Learned my lesson and I had my fill, Learnt it all in vain

Went through it all again, Now I’m back on the top again – Van Morrison

US equity indices are heading towards their first back to back gains since February, buoyed by the prospect of a virus fighting US fiscal stimulus worth around $2trn. European equities have also enjoyed a solid night and a in a volatile session, the UST curve is steeper with lower front end yields and higher longer dated ones. The improvement in risk appetite has weighed on the USD and in almost a mirror image to US equities the big dollar looks set to record a back to back daily fall after a fortnight of solid gains. The AUD is essentially unchanged at around 0.5960 after trading to an overnight high of  0.6074.

The S&P 500 is up 1.15%, after trading just over 5% at one stage, in a similar pattern the Dow is +2.4% and the NASDAQ ended at -0.51%. Apple news over the past hour that it is considering delaying the release of its 5G iphone as the coronavirus drains demand and disrupt its product-development schedule have weighed on its share and market sentiment in the IT sector.

Prior to this news

Equity markets on both side of the Atlantic were travelling with a  spring in their step following yesterday’s confirmation of an agreement between the US administration, Republicans and Democrats over a circa $2trn fiscal stimulus aimed at combating the economic impact from the COVID-19 pandemic. The Senate plans to vote on the historical bill on Wednesday, though full text hasn’t been released. The stimulus will provide $1,200 to individuals and $2,400 for couples, plus $500 for each child. There is no phase-in of the benefit, and no minimum income limit, which is good news for to those more vulnerable in the income disruption. One major concern, however , is how quickly in practice these cheques will be delivered, back in the GFC a similar legislation was passed in February, but checks were delivered   between may and July. The drastic nature of the COVID-19 induced recession suggests that an economic relief delivered 3 to 4 months later could be too late for many. The bill also includes a $500bn fund for loans to businesses, cities and states, including $50bn for airlines and a loan for Boeing; four extra months of unemployment insurance for those who lose their jobs.

So for now markets are riding the good news from the US stimulus package, this theme however is against a gloomier COVID-19 picture. More than 20k people have now died from the virus and the worldwide figure of infections has surpassed the 450k mark. Encouragingly, Italy reported 5,210 new cases of the coronavirus on Wednesday compared with 5,249 a day earlier, as growth in infections declined after nearly three weeks of lockdown measures. Confirmed cases in the country now total 74,386. Meanwhile the number of confirmed new coronavirus cases in the US surpassed 60k, led by a continued surge of infections in New York. The number of cases in the US is still rapidly growing. Although the growth rate in the number of cases in NY is slowing they are  picking up in other states. Meanwhile more cities and countries across the world are entering lockdowns.

Moving on to credit markets

US and European markets continue to improve. The US high grade CDX spread has narrowed for the third day running, now down to 94bps from 152bps on Friday and companies are able to issue more debt. Yesterday’s US corporate deals were more the 7 times oversubscribed. However, the high yield (junk) market remains effectively closed and funding strains remain evident in money markets despite the Fed’s unprecedented measures to support the market. US 3-month LIBOR continues to rise (now 1.23%). Commercial paper spreads have narrowed a little but off a very high base and lower-tier companies are facing ever-higher rates.

The improvement in risk sentiment has seen the USD lose its appeal for a second consecutive day. The BBDX index is down over 1.2% while the DXY index is -1.14% to 101.03. Against majors the USD is broadly weaker with NOK (+3.43%) and CAD (+1.77%) leading the charge. The NOK has benefited from repatriation news from it sovereign fund while gains in oil prices ( over 1%) aided along the way and help the CAD too.

The AUD and NZD  have benefited from the improvement in risk sentiment, but after a decent gains during the night, but are little change relative to yesterday’s levels. Essentially consolidating their recent move higher. The AUD traded to an overnight high of 0.6074, but now trades around 0.5950. The NZD ran up through 0.59 last night but the move wasn’t sustained and now the pair trades around 0.5840. 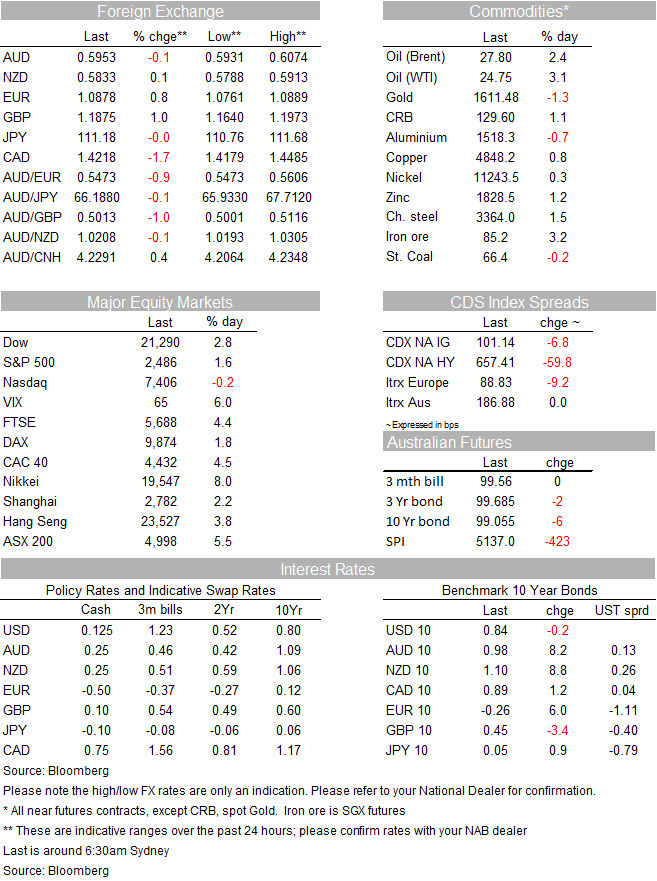 Markets Today: A calm Friday, but it could be a volatile week

Wellbeing diverging markedly across the country.

In a few hours Joe Biden and Donald Trump go head to head in the last election debate.