There was disappointment from investors after the minutes of the recent FOMC meeting were released.

Overview: It only takes a minute

Another proverbial night of two halves

Divided by the release of the July 29-30 FOMC meeting Minutes published at 4:00 AEST and so providing a good excuse to wheel out the 1975 Tavares classic (in fact the American R&B band’s only top ten hit in the US). Feeling as well as showing my age this morning.

Earlier in the evening

It was onwards and upwards for US, the S&P 500 adding another 10 points or so to Tuesday’s record closing high (to 3399) with Apple grabbling the headlines after it became the first publicly listed company with a market cap in excess of $2 trillion (representing a doubling of its share price since 2018). The S&P has now closed at 3375, down 0.44% on the day and the NASDAQ -0.57%

Snippets from the Minutes that appear to have been responsible for the sell-off included another quite dour outlook for the economy, where officials “agreed that the ongoing public health crisis would weigh heavily on economic activity, employment, and inflation in the near term and was posing considerable risks to the economic outlook over the medium term.”

The Minutes also reveal scepticism on the efficacy of using bond purchases to control the government bond yield curve (Yield Curve Control as currently practised in Japan and Australia) and although the meeting discussed “outcome-based” forward guidance – meaning conveying specific targets on inflation and unemployment before raising rates – there was no indication of a timetable for when this might happen. Prior to the Minutes, most recent surveys show a consensus for something happening on this front at the next (September 15/16) meeting, but the Minutes don’t provide immediate succour for this view.

Economic news published overnight was headlined by stronger than expected UK CPI inflation figures where the core CPI reading lifted to 1.8% from 1.4% well above the 1.2% expected, while in Canada the average of its three core CPI measures was softer than expected at 1.6% down from 1.7% and 1.8% expected. As per last week’s US CPI, special (likely one-off) factors were seen responsible for the miss on UK CPI and markets aren’t yet jumping to a conclusion that it is wrong to think that short term at least, the impact of the pandemic and containment/elimination responses to it is anything other than a disinflationary shock.

Following the earlier postponement of the US-China planned six-monthly check-up on the phase 1 trade deal and President Trump’s claim that he cancelled the talks because he “didn’t want to talk to China right now” Bloomberg reported that US-China talks will soon take place. We also had an MNI (Market News) reports that China has recently ramped up US soybean purchases to improve the optics, even as its purchases of US agricultural products remain well below target. The deal looks safely in place this side of the November US elections at least.

Have seen yields back on the rise after the recent pull back, 10-year Treasuries +1.3bps to 0.69%, a move aggravated by a relatively poor 20-year bond auction which received a low bid-cover ratio  of 2.26% and ‘tailed’ 1bp though its 1pm when-issued yield, even after a 2bp concession was built in in front of the sale. Indirect bidders, viewed a proxy for the strength of foreign demand, slipped to 62.6% from 63.1% at the prior 20-year auction (though we note in yesterdays’ (June) TICS data that net foreign buying of Treasuries returned after three months of heavy selling). In contrast, a sale of 30-year German Bunds met record demand for what is a zero-coupon bond, sold at a yield of minus 0.05%.

Have seen some quite big moves with a more than complete reversal of Tuesday’s lurch lower in all things USD. The DXY index is up 0.8% and the BBDXY 0.6%, most of the moves also coming straight after the publication of the FOMC Minutes and fully consistent the setback for risk sentiment that this engendered. Leading the moves have been falls of more than 1% for both GBP and CHF. EUR/USD dropped 0.7% and AUD/USD by a larger 0.8%, taking AUD/USD down from an high of around 0.7275 earlier in the evening to 0.7184 now. NZD is down a slightly lesser 0.6% to see the AUD/NZD cross down to 1.0955 from a high of 1.1044 on Tuesday.

A mixed night for commodities, headlined by a whopping $78 or nearly 4% drop in the gold price to $1,929 (blame the USD rebound) while base metals and iron ore are mostly stronger but oil off (Brent down 25 cents) as too China steel futures (-1.5%).

Nothing out of note locally.

China’s Loan Prime Rate announcements this morning are not expected to produce any change from the current 3.85% (1-year) and 4.65% (5 year) lending rates

US Initial jobless claims are expected to have fallen further after last week’s drop below 1 million, to 920k from 963k, with continuing claims seen falling to  15.0 million from 15.486 million

The US Philly Fed Business Outlook survey is seen falling to 21.0 from 24.1 but markets will be on guard for  steeper drop after the crunch lower in the Empire survey earlier this week.

Chart of the Day – US Initial Jobless Claims 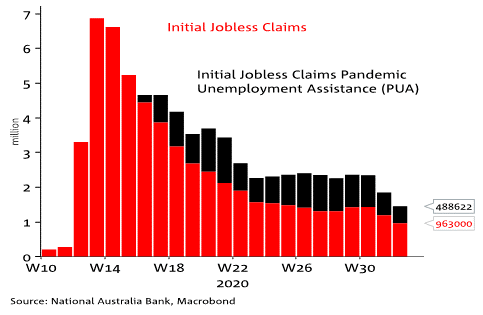 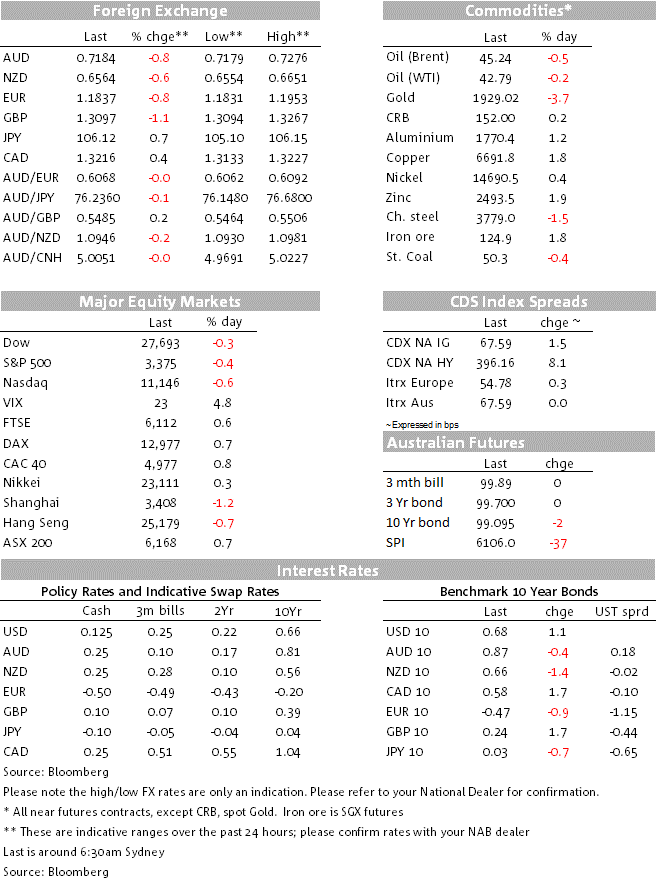 What more can central banks do to help stabilise the global economy?