Overview: Livin’ on the edge

Global equities have extended their recent decline amid heightened concerns over the potential globalisation of COVID-19.  New cases are reported in Spain and the US Centre for Disease Control and Prevention (CDC) warned Americans to prepare for a virus outbreak at home. The VIX index jumps to its highest level in just over a year and the 10y UST Notes records a new record low. Markets remain on edge as anxiety over the impact from COVID-19 remains a huge uncertainty. The move lower in UST yields and increase in Fed rate cut expectations have weighed on the USD with JPY one the outperformers, reasserting its safe haven attributes. AUD and NZD are relatively steady.

Lack of major new news during the Asian session pointed to the potential for a rebound in US equity markets with the SPI futures up best part of 1% at one point in yesterday’s APAC session (China reported 508 new cases for Feb 24 vs 409 on Feb 23 and Korea reported 60 new coronavirus cases, raising total to 893 – less cases than the day before). Then, after a relatively subdued opening session in Europe, sentiment took another turn for the worst following news that Spanish authorities had isolated around 1000 guest and workers at a hotel on the Canary island of Tenerife given an Italian and his wife staying at the hotel tested positive for the coronavirus. Barcelona reports first coronavirus case, also Italy-related.

After a brief uptick at the open

US equity markets continued their broad decline with the move accelerating later in the session following  a warning from the CDC noting that Americans should prepare for significant disruptions of daily life in the event of an outbreak at home. The CDC added that the emergency plan would be similar to the drastic measures taken by other countries. Nancy Messonnier, director of the CDC’s National Centre for Immunization and Respiratory Diseases, asserted that “We expect we will see community spread in this country,” adding that  “It is not a matter of if, but a question of when, this will exactly happen.”

The strong wording from the CDC director has added to the risk off sentiment evident in equity markets over recent days. As we type the S&P 500 is over 3% down on the day and the NASDAQ is -2.76%. US equity markets look set to end a fourth consecutive day of decline, the Stoxx Europe 600 Index ended the day  -1.8%. The VIX index, a measure of US equity volatility, is now at 28.52, its highest level in over a year.

The risk off mode has also been evident in core global bonds with UST yields yet again leading the decline. 10y German Bunds closed at -0.5120%, 3bs lower while the 10y UST note currently trades at 1.3271%, after briefly trading to a new record low of 1.3088% just over an hour ago. On the day, the five year note has actually led the decline in UST yields, falling 5.50bps to 1.155%.

The increase in risk aversion has increased expectations for the Fed to come to the party and ease some of the financial pain. The market now prices a better than even chance of a 25bps cut at the end-April meeting and a series of cuts are priced over the next year and a bit. The US 2-year Treasury rate is down another 6bps to 1.18%, well below the Fed Funds target range of 1.5-1.75%. As we are about  to press the send button, Fed Vice Chair Clarida is hitting the screen trying to provide a brave face amid heightened market uncertainty. The Vice Chair has reiterated the economy and Fed policy are in a `good place’ supported by a strong labour market, pushing back on the current increase of market expectations for Fed rate cuts. But as a good ambivalent economist, he also notes that Fed decisions will proceed meeting by meeting adding that the Bank’s policy is not on a pre-set course. So when the facts change (soft hard data may be? and or bigger collapse in US equities), the Fed will change its mind.

The USD is a little bit softer in index terms with DXY down 0.43% to 98.993 and BBDXY down 0.25%to 1212.94. A repricing of Fed rate expectations and the broad decline in UST yields have weighed on the big dollar. Looking at G10 pairs, GBP (  -+0.60% to 1.3001) and JPY ( +0.54%) have led the gains with the latter reasserting its safe attributes which in our view are a function of how 10y UST yields and Developed equity markets (DM) perform with US equities usually taking the lead. Price action over the past few days validate this view. USD/JPY now trades at ¥110.09, after briefly trading above ¥112 late last week. Meanwhile gains in GBP can be attributed to the opening trade talk barbs ( see more below).

AUD ( -0.03% to 0.6598) and NZD ( -0.09% to 0.6326) are relatively steady notwithstanding the sharp increase in risk aversion. To some extent this reflects how hard they have been hit over the past few weeks and also the weight on the USD amid the increase in fed rate cut expectations..

The economic calendar has been light so far this week, not that the market is paying much attention to the dataflow anyway. US consumer confidence rose to a six month high, albeit slightly below market expectations, but this should fall at the next reading or two, as respondents factor in the equity market sell-off.

EU’s chief Brexit negotiator and UK PM Johnson fired off some barbs ahead of the beginning of formal talks on a trade deal. Barnier said that “the trade deal will be associated with a fisheries agreement and a level playing field, otherwise there won’t be agreement at all” and “we can’t have backtracking” given the short period allocated for agreement “demanded” by Mr Johnson. Johnson’s office said that it will seek to prioritise Britain’s legal freedom from the bloc, arguing for similar autonomy that Canada and Japan received in their trade deals. The two sides are some way apart as formal talks begin, but it is in the interest of both parties to come to a deal by year-end. 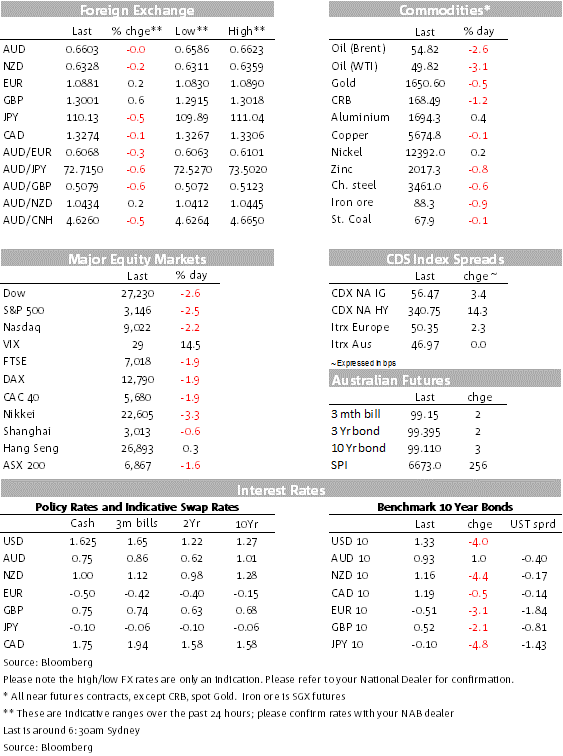