Markets Today: Heading for a half percent cut?

Could the Fed be careering to a half percent rate cut at the end of the month?

NY Fed President John Williams, regarded as one of the ‘big three’ at the Fed along with Chair Jay Powell and VP Rich Clarida, speaking a few hours ago on “Living life near the ZLB (zero lower bound)” was not specifically commenting on the current policy outlook. But his comments were deemed apt to the Fed’s current predicament. He said that “when you only have so much stimulus at your disposal, its pays to act quickly to lower rates at the first sign of economic distress”, and pointed out that “investors are increasingly viewing these low inflation readings not as an aberration, but rather a new normal”.

Alongside, Rich Clarida has also been out, in an interview with Fox news less than two hour ago, saying that “You don’t want to wait for the economy to turn down”  and that while recent U.S. indicators have been mixed, “global data has been disappointing” and inflation has been coming in on the “soft side”.

The upshot is that despite another stellar regional Fed business survey courtesy of the Philadelphia Fed, whose July index shot up to 21.8 from 0.3 in June and 5.0 expected (‘Philadelphia Freedom’ was today’s working title before Williams spoke – thanks John) US 2-year yields have dropped by 6bp on Williams’ comments and 10s by 4bps, the US dollar has falling by half a percent in DXY as well as broader index terms and there are now just over 41bp of easing in the Fed Funds rate priced for August 1st (the day after the July 30-31st FOMC meeting).

Strictly speaking, this does not imply a greater than 50% chance of a 50bp cut to the Fed Funds target range this month, in so far as the market is also pricing in a quite significant risk that the Fed lowers the IOER (interest on excess reserves) by 5bps, meaning that even on a 25bp Fed cut, the Fed Funds rate would come down by closer to 30bp. But even adjusting for this, it still implies at least a 40% chance of -50bps..

US equities once again responded more to rising confidence in Fed easing and the chance of a 50-point first cut than the reasons why the Fed might be easing in the first and amid mixed incoming corporate earnings (e.g. Netflix had fallen by over 11% after yesterday’s market close following disappointing subscriber numbers).

In fact, the IT sector has been among the best performing S&P sectors overnight, +0.8%, alongside financials, though it’s also defensive sectors – consumer staples and utilities – that have fared equally well.  The S&P closed +0.4%, the NASDAQ +0.3% and the Dow flat.  Morgan Stanley reported EPS of $1.23, above its $1.14 street consensus but equities trading revenue disappointed at $2.13bn against $2.27bn expected. Its stock ended about 0.5% higher.

In currencies, the AUD and GBP are vying for top spot among G10 currencies, both up 0.9% on Wednesday’s New York close. AUD received a small lift out of yesterday’s June employment data, where the unchanged unemployment rates (albeit 5.24% from 5.19% to two decimal places) failed to provide a smoking gun for the RBA to think about a quick follow up to its June and July rate cuts. The additional gains are really just the USD story post-Williams. The NZD has slightly lagged the AUD move, meaning that yesterday’s pre-Oz employment data test of 1.04 on the AUD/NZD didn’t succeed in breaking, now back at 1.0434 and which the NAB/BNZ FX Strategy team regard as close to the bottom of the current ‘fair value’ range (1.04-1.06).

GBP is up for more idiosyncratic reasons.  UK June retail sales punched the lights out with a 0.9% gain excluding autos and fuel (and +1% including auto fuel).  Beer sales in the early stages of the Cricket world cup might have had a hand here, or it may just have been that, as NAB’s Morning Call host Phil Dobbie quips this morning, when the going gets tough, the tough go shopping.

Also helping the cause of Sterling and after its Brexit-related beat up of recent weeks, has been news that the House of Commons has backed a bid to stop a new prime minister suspending Parliament to force through a no-deal Brexit.  A majority of 41 approved an amendment that blocks suspension between 9 October and 18 December unless a Northern Ireland executive is formed (I’m not quite sure the significance of the latter).  Four cabinet ministers, including Philip Hammond, abstained and 17 Tory MPs rebelled, including Minister Margot James, who has resigned.

Finally in commodities, oil is off almost 2% off or around $1, which looks to be on a UK Guardian report that “Iran has offered a deal with the US in which it would formally and permanently accept enhanced inspections of its nuclear programme, in return for the permanent lifting of US sanctions.  The offer was made by the Iranian foreign minister, Mohammad Javad Zarif, on a visit to New York”.

The Guardian says “it is unlikely to be warmly received by the Trump administration, which is currently demanding Iran make a range of sweeping concessions, including cessation of uranium enrichment and support for proxies and allies in the region. Zarif insisted, however, that his offer was “a substantial move”. Reports that the US navy ship destroyed an Iranian drone that the US claimed came within 1,000 yards of the ship in the straits of Hormuz, hasn’t had much impact.

Elsewhere base metals are mostly, as is gold (alongside a falling dollar and lower US yields) while iron ore, steel rebar futures and coal are all a bit lower.

Not too much of note today.  Japan June nationwide CPI is the only significant release in our time zone.

Boston Fed President Rosengren (a current FOMC voter and seen as a bit on the hawkish side) speaks on a panel that includes BoJ Governor Kuroda, but not until 4.30pm NY time. 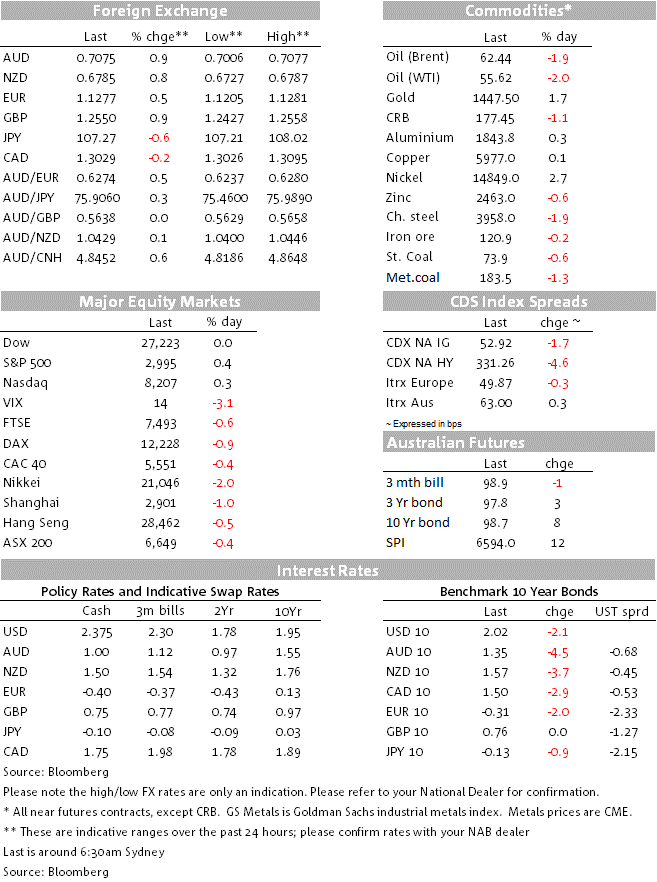