The unrest in Hong Kong is likely to impact the Australian dollar.

While they weighed on the Yuan and Hong Kong dollar as well as Asia EM FX more broadly – and with that the AUD – US equities still managed to eke out a positive session ahead of today’s Memorial Day holiday (the UK is also out Monday). The 12-month HKD outright forward ended Friday at 7.83 vs. the 7.7550 spot rate and 7.85 peg ceiling (see Chart of the Day below).

The down day for the AUD meant that Friday was the first time this month we’ve seen opposite signs on the ‘change on the day’ for the S&P 500 and AUD/USD.  It’s a timely reminder that when we see divergence between Developed Market and Emerging Market risk sentiment – as was particularly evident in 2018 after the US-China trade war kicked off – the AUD (and NZD) tend to resolve the conflict by correlating more strongly with the latter.  AUD/USD has started the new week about 10 pips down on Friday’s New York close, near 0.6530. NZD is little changed near 0.6100.

There were plenty of headlines on Friday regarding the failure of China’s NPC to formally announce any growth target for 2020, though a report from Market News, citing sources close to policy makers, said that the economy will need to grow by 3.5-4% in 2020 to meet objectives set by the government. The report noted that the goals in the official Government Work Report include a surveyed urban unemployment rate of about 6%, together with the creation of over 9 million jobs, and growth in resident income in line with the overall economy. The source said the employment target will be tough to reach and will require expansion of gross domestic product of as much as 4%.

The fiscal deficit ceiling was set at more than 3.6% of GDP, up from last year’s 2.8%, but planned issuance of CNY1 trillion of special Treasury bonds, which do not figure in headline deficit calculations, was lower than some advisors had expected. On monetary policy, a State Council spokesman indicated that both interest rate cuts and RRR cuts were in the offing and that the ‘new monetary policy instruments’ mentioned in the Report could include accepting corporate bonds as collateral for new lending. M2 money supply and Aggregate Social Financing are both seen needing to rise by at least 10% this year.

If approved this week, the Global Times suggests the detailed legislation could be passed into law within six months, or even sooner (timing is important here, bearing in mind the LegCo elections currently scheduled for September, and also given the run-in to the US elections).

Friday’s announcement drew swift condemnation from US Secretary of State Mike Pompeo, calling it a “death knell” for the city’s freedoms. “The United States strongly urges Beijing to reconsider its disastrous proposal, abide by its international obligations, and respect Hong Kong’s high degree of autonomy, democratic institutions, and civil liberties,” Pompeo said in a statement on Friday. He warned that if China goes ahead with the proposals the US would reconsider exemptions that shield HK exports from tariffs (under the 1992 Hong Kong Relations Act – augmented last November by the Hong Kong Human Rights and Democracy Act – largely tariff free trade is permitted between Hong Kong and the US). Therein lies the rub, in so far as ending this arrangement would be economically damaging to both Hong Kong and the 1,300-odd US firms who do business there.

Separately and just ahead of Friday’s US close

U.S. Commerce’s reported a series of steps including the impending addition of the China’s Ministry of Public Security’s Institute of Forensic Science and eight Chinese companies to the so-called entity list, which will result in these parties facing new restrictions on access to U.S. technology.

We might also add a UK government decision on Friday to claw back Huawei’s involvement in Britain’s 5G network, reversing its earlier decision to allow Huawei as much as 35 percent access to the 5G network. Seemingly informed commentators in the U.K. suggest the decision is crucially linked to negotiations over a putative US-UK free trade deal.

The ECB gave a strong hint Friday of additional easing measures likely to be announced in June. In the account of the April 30 (virtual) ECB meeting published on Friday, members notes that “At the June meeting, more information would be available, including new Eurosystem staff macroeconomic projections” and that “The Governing Council would have to stand ready to adjust the Pandemic Emergency Purchase Program and potentially other instruments if it saw that the scale of the stimulus was falling short of what was needed.”  Philip Lane, the ECB’s chief economist, said later on Friday that central banks have to be more aggressive in dealing with shocks that depress inflation — such as the current one — than those that boost it. “The tools to tighten the monetary stance are more effective than the tools to loosen the monetary stance,” he said.  He also said the institution hasn’t forgotten another key task it had planned for 2020 — a reassessment of its overall policy strategy — calling it a “high priority.”

There wasn’t a lot of economic news Friday (as irrelevant for markets as this is at the moment) but the highlight of what there was an 18.1% fall in UK retail sales in April (-15.5% ex-auto-fuel, the latter close to expectations). On policy, BoE Deputy Governor Dave Ramsden told Reuters it was “perfectly reasonable to have an open mind” about negative rates.  Ramsden cautioned that the Bank needed to understand how negative rates could affect the banking system before deciding whether it would be an appropriate policy tool, echoing similar comments from Chief Economist Haldane and Governor Bailey from earlier in the week.  The GBP was about 0.4% lower on Friday, but this was not out of line with several other G10 FX moves and the generally firmer USD.

It was a quiet  day for US bond markets Friday (which closed early ahead of today’s holiday) while UK bond yield went slightly more negative after the Ramsden comments (5-year gilts to -0.018%). In Australia, the 10 year bond futures added 2 ticks in afternoon trade, on the view that forthcoming AOFM issuance could be smaller than previously announced, following news that the cost of the JobKeeper Programme was A$60bn less than the earlier estimate $130b. In essence, this is due to some 500 companies with one employee putting ‘1500’ in the relevant box (the value of JobKeeper per  employee) rather than ‘1’ (the number of employees eligible).

Since the news broke

Treasurer Josh Frydenberg has been pushing back against suggestions that the undershoot was therefore extra money that could be spent supporting a wider range of workers impacted by the business lock-downs. Rather, he said it was a positive result because the recovery bill has reduced, putting less stress on the budget. “This revision by Treasury is not an invitation to go and spend more. All the money that the government is spending during the coronavirus period is borrowed money,” he told the ABC. Treasury said it still expects the unemployment rate to reach around 10% and that it would have been around 15% had it not been for JobKeeper. As for the RBA, which has made clear it is focused more on total hours worked rather than the unemployment rate, the ATO error does suggest that while the RBA said Thursday that it expects total hours worked to fall further, our economists think it’s now likely it won’t be quite as disastrous as the 20% total fall they had forecast.

China’s NPC is under way until 28 May.

Following last week’s strong bounce in the expectations component of the German ZEW Survey, todays’ May IFO survey is expected to show some improvement off a record low base. France’s INSEE business survey and German consumer confidence are out Tuesday.

Locally, PM Morrison speaks on Tuesday, where he may discuss Australia-China relations. Ahead of Q1 GDP on 3 June, construction work done and the capex survey are due next week. Construction should fall by 1.5% in the quarter on a 2% decline in housing investment.

Chart of the Day – HKD Spot and 12-M Outright Forward 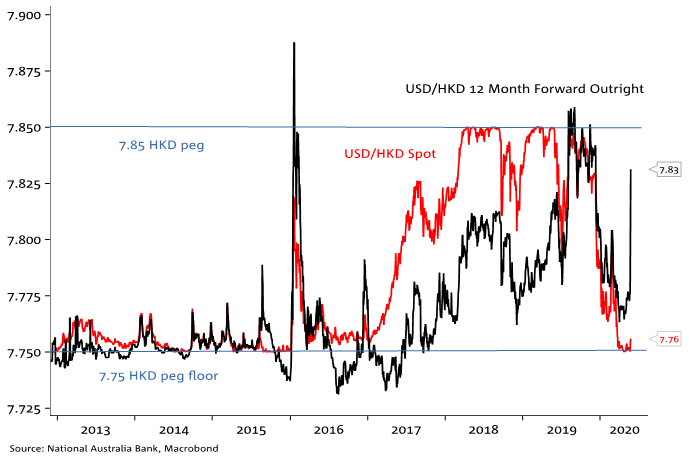 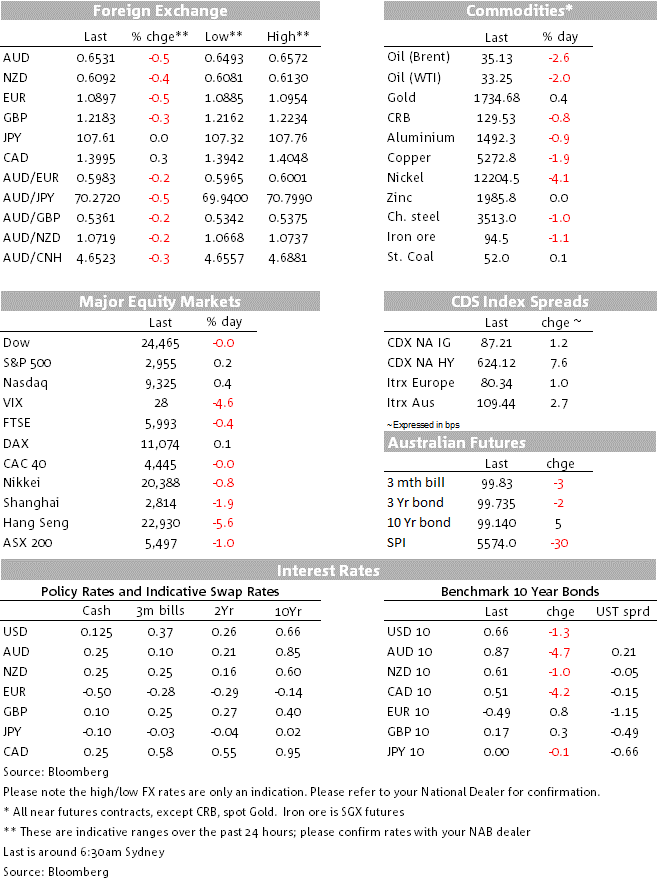