Impeachment proceedings against the US President has hit equities, bond yields and oil prices hard.

I come up hard baby, but now I’m cool, I didn’t make it sugar, playin’ by the rules – Marvin Gaye

From Tariff Man to Trouble Man

News that US House Speaker Pelosi is considering (and then confirms) a formal impeachment enquiry of President Trump rattles markets, triggering a sell-off in US equities, a solid bid in US Treasuries and broad decline in the USD. President Trump UN speech doesn’t help sentiment either as he takes a hard-line on China and social media companies. GBP rises on unlawful parliamentary suspension court ruling while AUD and NZD rise following upbeat speech by RBA Governor Lowe. Oil prices have led the decline in commodities with Gold the one exception.

News reports that US House Speaker Nancy Pelosi will announce a formal impeachment enquiry for President Trump triggered a broad risk off mood (Pelosi confirms impeachment enquiry at a press conference a few minutes ago). The move comes after several days of Democrats pressure following suggestions from a whistle-blower that President Trump pushed Ukraine’s government to investigate Joe Biden and his son alongside allegations that Trump withheld foreign aid to the country in order to gain some influence. The President has promised to release an unedited transcript of his conversation with the Ukrainian President, but Democrats have the government turn over the whistle-blower complaint

As it has been the case over the past couple of days, US equities opened the NY session in a positive mood, but soft data releases (more below) ahead of the impeachment headlines weighed on sentiment, President Trump’s UN speech was another blow before Pelosi’s killer punch. The president made strong statements against China, noting the country’s economic model that had created an unfair playing field. The president said that ““Not only has China declined to adopt promised reforms. It has embraced an economic model dependent on massive market barriers, heavy state subsidies, currency manipulation, product dumping, forced technology transfers, and the theft of intellectual property and also trade secrets on a grand scale,”. Trump said that he hoped to reach an agreement that would be beneficial for both countries but added “…as I have made very clear, I will not accept a bad deal for the American people”. The speech followed China’s decision yesterday to give waivers to several state and private companies to buy US soybeans tariff-free.

The president also had a go at Iran and warned social media platforms are acquiring “immense power” over what people see and what they are allowed to say. The latter comment served as a reminder of the risk of heavy regulation and unsurprisingly FAANG stock were among the biggest losers for the day. The NASDAQ closed -1.46% and the S&P fell 0.84%. Energy stocks were also among the biggest losers, sector closed 1.63% down, reflecting the sharp decline in oil prices and broad concerns over the global growth outlook amid simmering geopolitical tensions with the added domestic US political uncertainty.

GBP is at the top of the G10 leader board, up 0.56% following news that the UK Supreme Court unanimously ruled that Boris Johnson’s suspension of parliament was unlawful. This paved the way for the Speaker of the House to announce Parliament will reconvene tomorrow. As expected, in following such an announcement the opposition parties are calling for Johnson to resign. An opposition-led Confidence vote may take place, but it will need pro-EU Tory support to be successful. Our London-based strategist Gavin Friend believes that these Tories won’t yet support such a motion because they may instead wish to see if Johnson can get an improved deal with the EU by 19 October. If we are wrong here, one option is the government collapses under such a vote and a unity government takes over – extending Article 50 past 31 October – and then dissolves ahead of likely mid/late November elections. GBP now trades just under the 1.25 mark.

In addition to the softer USD backdrop, the AUD and NZD have also been aided by a positive interpretation to RBA Governor Lowe speech last night. Speaking on the economy in Armidale, Governor Lowe said a lot of things, but the market latched on to his remarks that ‘after having been through a soft patch, a gentle turning point has been reached” and he added “the fundamental factors underpinning the longer-term outlook for the Australian economy remain strong.” . This long term assessment of the economy triggered a 25bps jump on the AUD to 0.6806 with the market also losing some conviction on the possibility of an October rate cut with the probability falling from 80% to 60%. That said, NAB Economist Kieran Davies noted that the Governor also said that “further monetary easing may well be required”, highlighting the pressure on the exchange rate from falling global interest rates and an “accumulation of evidence” locally that the economy can sustain lower rates of unemployment and underemployment than previously thought likely. In the Q&A session Lowe said that the bank would consider QE in some circumstances, adding it was unlikely, but possible. NAB  still thinks it is more likely that the RBA will cut rates next week to 0.75% given the downside risks to global growth, spare capacity in the labour market, and subpar growth in GDP, where there are few signs yet that tax cuts are boosting spending.

The AUD now trades at 0.6801, up 0.37% over the past 24 hours. A stronger AUD against a softer USD backdrop has also contributed to an extension to the NZD nascent recovery (we believe that RBA policy is part of the RBNZ’s reaction function and the market looks to be on the same page). The Kiwi now trades at 0.6325,  up 0.56% , after trading to a four year low of 0.6255 on Monday. On Friday CFTC data revealed a record NZD net short number of contracts, heightened speculative selling has been a key driver of NZD underperformance over recent weeks and now its swift recovery probably reflects some short covering action by speculative traders.

The US Conference Board measure of consumer confidence slumped, coming in well below market expectations, with the expectations component now the weakest since January. The biggest monthly fall this year makes the index look more in line with the slump recorded by the competing University of Michigan survey. Pantheon Macroeconomics notes the proportion of people expecting business conditions to worsen rose to a 6-year high and is now in line with readings seen just before the recessions of 1990, 2001 and 2007, so it needs to be watched carefully.

Germany’s IFO business climate index wasn’t as bad as feared by some, but the expectations component still fell to the lowest level in a decade. Of some comfort was that there was little evidence of the recession in the manufacturing survey spilling over into the services sector, unlike yesterday’s PMI report. The Euro now trades at 1.1020 effectively reversing all the PMI decline recorded on Monday night.

BNZ economists expect the RBNZ will wait until November’s Monetary Policy Statement before reducing the OCR further. This view is consistent with market pricing that currently sees a 90% chance for a November rate cut. 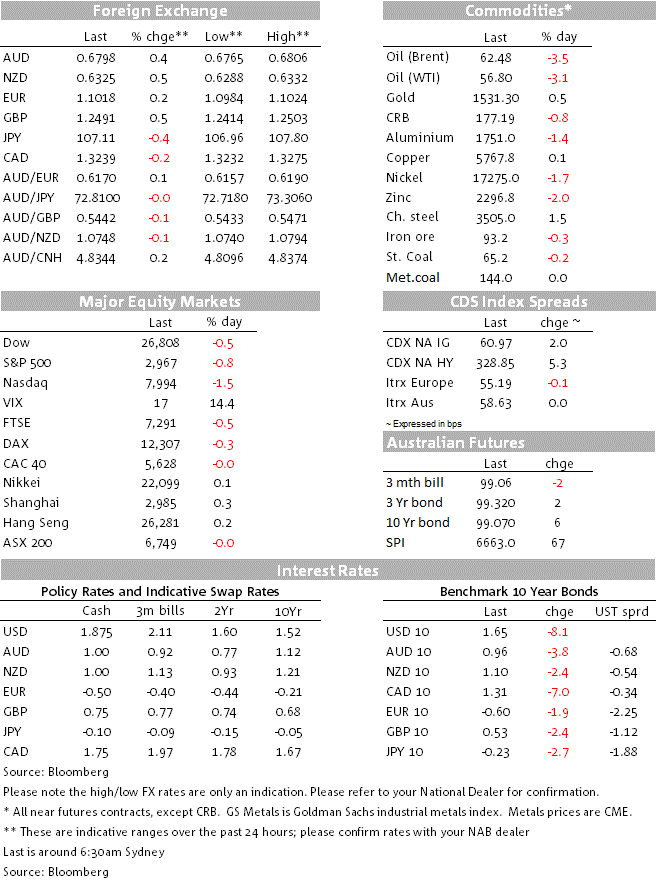