US equities fell for a second day on Friday as investors reassessed President-elect Biden ability to implement his pandemic relief spending plan. Soft US data and US banks underperformance didn’t help sentiment either. A safe-haven bid lifted the USD and weighed on longer dated UST yields while oil led the declines within commodities.

US equities futures traded in negative territory during our APAC session on Friday reflecting a cautious reaction to President-elect Biden’s pandemic relief package. In our view, the underwhelming market reaction to Biden stimulus plan reflects the reality that at this stage this is just a proposal that needs to find support in Congress potentially requiring time, a few political debates and several pieces of legislation, Biden’s speech also had a thinly veiled comment suggesting a review on tax policy seems likely.

Towards the end of his speech Biden noted that “where we’re making permanent investments, recurring investments – as I said in the campaign trail, we will pay for them by making sure that everyone pays their fair share. Not punishing anybody. We can do without punishing a single person by closing tax loopholes for companies that ship jobs overseas, or allow American companies, 90 of the top Fortune 500 to pay zero federal income taxes. Asking everyone to pay their fair share at the top so we can make permanent investments to rescue and rebuild America. It’s the right thing for our economy. It’s the fair thing. It’s the decent thing to do.”

US data releases and Banks performance also didn’t help market sentiment. December retail sales fell 0.7%, below the consensus, 0.0%, the decline in the core reading was a bigger disappointment (Sales ex-autos dropped 1.4%, well below the consensus, -0.2%) while the control measure which goes into the GDP calculation, was even worst! plunging 1.9%, well below the consensus, 0.1%. The data provided a bit of a reality check highlighting the impact from the third COVID-19 wave in the US and arguably until the US gets this new virus wave under control, its domestic consumer is likely to remain cautious. This, of course, is not just a story for Q4-20, the beginning of Q1-21 doesn’t look that much different at the moment. The January Empire State manufacturing index also underwhelmed, dipping to 3.5 from 4.9, below the consensus, 6.0

On Friday JPMorgan Chase, Citigroup and Wells Fargo reported their Q4 earnings. The good news is that their combined reserves for losses on loans were trimmed by $5bn, reflecting bank chiefs‘ improved assessment on the US economic outlook. At the start of the pandemic the top six US banks set $35bn aside to cover loan losses in the first half of 2020. Notwithstanding the good loans’ news, US banks still didn’t have a good day on Friday with Citi (-6.93%) and Wells Fargo (-7.80%) leading the decline as investors focused on weaknesses specific to their businesses.

Equities Fridays’ and past week’s performance

The souring in sentiment , soft US data and reassessment of Biden’s plan triggered a safe-haven bid on UST. Early during  our session on Friday, 10y UST yields traded to a high of 1.1309%, but it was all down from there with the benchmark yield ending the day at 1.0835%. Core yields were lower on the week with AU futures outperforming, down 4.bps in yield terms. Italian BTPS were the big underperformers amid concerns over PM Conte’s coalition government following former PM Renzi’s party withdrawal from the coalition, leaving Conte without a majority in parliament.

Moving onto FX, the USD had a good day on Friday with pro-growth and risk sensitive currencies coming under pressure. In addition to the retreat in equity, the thesis of a solid global economic recovery in 2021 is facing a bit more uncertainty as the COVID-19 infections continue to rise around the globe increasing the prospect of an increase in containment measures.   Over the weekend German media reported the government is considering the introduction of nationwide night-time curfew to try to contain the spread of the virus and from Monday the UK is closing its travel corridors with countries around the world, meaning all visitors from overseas will require a negative coronavirus test result within 72 hours of travel to enter Britain. Meanwhile, US recorded another 3,830 Covid-19 related deaths, keeping the country on track to reach 400,000 deaths before President-elect Joe Biden’s inauguration on Wednesday.

USD indices gained 0.6% on Friday with DXY up 0.75% on the week while BBDXY climbed 0.4% over the same period. NOK was the big underperformer on Friday reflecting its big sensitivity to movement in oil prices ( down over 2%). The AUD and NZD were not too far behind, falling around 1% and now beginning the new week at 0.7077 and 0.7137 respectively.

The pound fell 0.74% on Friday to 1.3588, but along with JPY, cable was the only other pair to record gains against the USD for the week, up 0.24% (JPY gained 0.09%).The UK economy shrank less than expected during the lockdown in November, falling by 2.6% vs the-4.6% consensus. Bloomberg noted the GDP figures suggest that consumers and companies adapted better to the second round of coronavirus curbs than they did in the first half of 2020. A potentially larger hit is coming this month with schools and all non-essential shops closed, which has kept up pressure on the government and Bank of England to do more to protect people unable to work.

FX Fridays’ and past week’s performance

The turn in sentiment in on Friday was also evident in the commodity space, concerns over the potential for the global economy to rebound this year is increasing the uncertainty over the demand for commodities in coming months. Brent and WTI oil fell by more than 2% on Friday, but copper and metals were bigger underperformers on the week, down 1.95% and 1.66% respectively while Zinc was the biggest underperformer, down 4%. Iron ore was steady closing the week at $168.8 while steal coal was the week’s outperformer, up 3.68%.

Commodities Fridays’ and past week’s performance 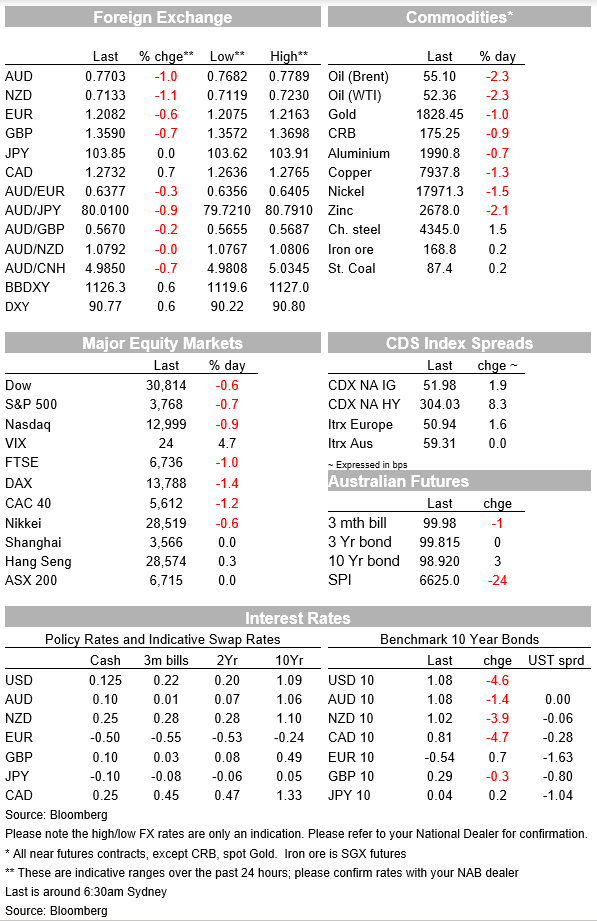