Markets Today: Is the US bouncing back sooner than expected?

Equity markets continue to rise and the US dollar continues to weaken with increasing risk-on sentiment.

I’m looking for a complication, Looking ’cause I’m tired of trying

Make my way back home, When I learn to fly (high) – Foo Fighters

After a quiet start to the week during APAC (with the notable exception of a 3.2% standout rise in the NZSE), the direction of travel in FX markets has seen the USD give up more ground. The DXY has eked lower by 0.3% so far this week to 96.7. Again, the commodity currencies have set the pace overnight after a quiet start to the week yesterday.  The Kiwi is at the top of this week’s early leader board, up 0.79% to 0.6559, the AUD not far behind up 0.75% to 0.7019, now holding for now above 0.7000 a little more than the ever-so-brief forays of last week, having probed toward the 0.7032 intra-day high on 1 January. Both have come a long way in a short time; only time will tell if this latest rally episode sticks. The NZD is the highest since 28 January.  Doing no harm to the NZD was the weekend announcement from PM Ardern that NZ is now at Alert level one, lifting all restrictions on social distancing and on public private and public gathering. There were no changes to border restrictions.

Also in the background

China trade data released on the weekend ahead of next week’s June activity reports revealed export values softening in May from a weak global economy, but there were clear signs of accumulating Chinese import demand, including in the commodity space. Import values declined but that cloaked resilient volumes,  thus pointing to the returning Chinese economy. The trade surplus with the US has been falling in trend terms, adding more to the global de-risking theme of late, China also buying more soybeans, presumably tilted toward the US, though not stated. China did announce last week it was buying more than $100 million of US soybeans, consistent with China proceeding with actioning a key aspect of the phase-one trade deal. The Jan.-May trade surplus with US fell 14.5% on year, China’s exports to U.S. -11.4% y/y while imports from U.S. dropped a lesser 4.5% y/y.

Exports fell 3.3% y/y, the consensus forecast calling  for a 6.5% contraction. Imports tumbled 16.7% y/y, also deeper than the -7.9% y/y consensus forecast. The trade balance recorded a $62.9 billion surplus, much wider than the $45.3 billion surplus in April. By region, the export data set shows a wide-ranging contraction in trade. Exports to Asean, the U.S. and EU all declined from a year earlier, with Japan the only exception. While import growth contracted in value terms, volumes of major commodity imports recorded increases in real terms. Including increases in the volume of iron ore and crude oil. We also note that Port Hedland shipments of iron ore reached a record 47.782m tonnes in May, year to date shipment volumes up 6.6%.

Brazilian producer Vale ordered by a Brazilian court to shut its Itabiras mining hub due to COVID-19 infection spread.   The market is clearly assessing heightened supply security risks from Brazil, risks arguably potentially amplified by changes to the way that Brazil reports its COVID-19 data.

The Euro has been little changed so far this week

Speaking to the European Parliament overnight, ECB’s President Lagarde commented that the ECB response to the crisis had been “proportionate”, measures justified by the severe risk and that she stands ready to help solve the German court problem. Of course, at the last week’s press conference, she welcomed the plan to beef up the fiscal response, though that is still to get the sign off from member governments including how the funds will be apportioned across the economies on yet to be clarified metrics, presumably on a basis of “need”.

Sterling has done at little better than the EUR at the start of the week and despite last week’s EU-UK separation talks ending without agreement but a degree of goodwill to work towards an agreement. Notwithstanding that the UK has one of the least enviable records of COVID-19 deaths, the recent trends in the numbers of new infections, new hospitalisations, and deaths have continued to decline. Health minister Matt Hancock reported at the usual government afternoon press conference 55 new COVID-19 deaths in hospitals, the lowest since 21 March, so before lockdown, comprising no fatalities in London and Scottish hospitals. Sterling is up 0.45% against the USD to 1.2724, AUD/GBP trading at just over 0.55.

The NY Fed released its May Survey of Consumer Expectations for May adding more to the recovery story as far as the US consumer is concerned. US  consumers are becoming a little more optimistic on the labour market, expectations for earnings growth up a bit, as has job finding hopes, and the outlook for job losses easing a little. The mean perceived probability of losing one’s job in the next 12 months declined from 20.9% in April to 18.7% in May, while the mean perceived probability of finding a job (if one’s current job was lost) increased from 47.0% in April to 48.3% in May. Improving labour market metrics were also evident in the recent May US Conference Board Consumer Confidence survey, the Net Jobs plentiful index turning up to -10.4 in May after -15.7 in April, having been +32.6 in Feb. The NY Fed survey also reported some improvement in household spending expectations, up 0.7% points to 2.9%. In short, again playing to the recovery story. Even so, long-dated US Treasury yields have given back some of the post-payrolls rises, the 10y back to 0.8768% after peaking at 0.955% after payrolls.

The NY survey added more directionally to the recovery story as Friday’s non-farms did (payrolls unearthing a 2.5m rise in employment, unemployment lower at 13.3% rather than 19% expected, and with rising participation).  Another recovery gem came from north of the US border Friday by a better than expected Canadian employment report for May, also out Friday. The Canadian report also showed a surprise rise in employment and a lower than expected unemployment rate at 13.7%, also with a rising participation rate, +1.6% points. Both reports added to the global turnaround picture emerging last month. Note also that while not a market sensitive indicator, Canadian housing starts in April and May – the May report out overnight – have both been better than expected even if the May starts are still below pre-pandemic levels.

The Fed has expanded its Main Street program to allow more small and medium-sized businesses to be able to receive support. The Fed is lowering the minimum loan amount(from $500K to $250K), raising the maximum loan limit, adjusting the principal repayment schedule to begin after two years, and extending the term to five years, providing borrowers with greater flexibility to repay the loans

Announced Sunday in Perth for any still catching up, the WA government followed up the Federal Government’s Homebuilder grants package with their own scheme comprising a $20,000 (additional) grant for first home buyers for new residential homes as well as a 75% rebate for stamp duty that could take the available Federal and State grants for WA first time home buyers close to a sizeable $70,000. The State Government has costed that scheme at $117mn for the building bonus grants, $8.5m for stamp duty rebates, as well as allocating $319m for social housing, including 250 new properties, refurbishing 6,500 properties and regional maintenance contracts. No doubt the market will be paying close attention to housing market conditions and confidence in the weeks and months ahead.

A quiet calendar awaits tonight with the US NFIB Small Business Survey for May as most of the states emerging from lockdown, viewed from the prism of Friday’s non-farms report to confirm or not the improvement in labour demand and small business activity generally. Ahead of then there is an updated estimate of Eurozone Q1 GDP, of lesser market interest. 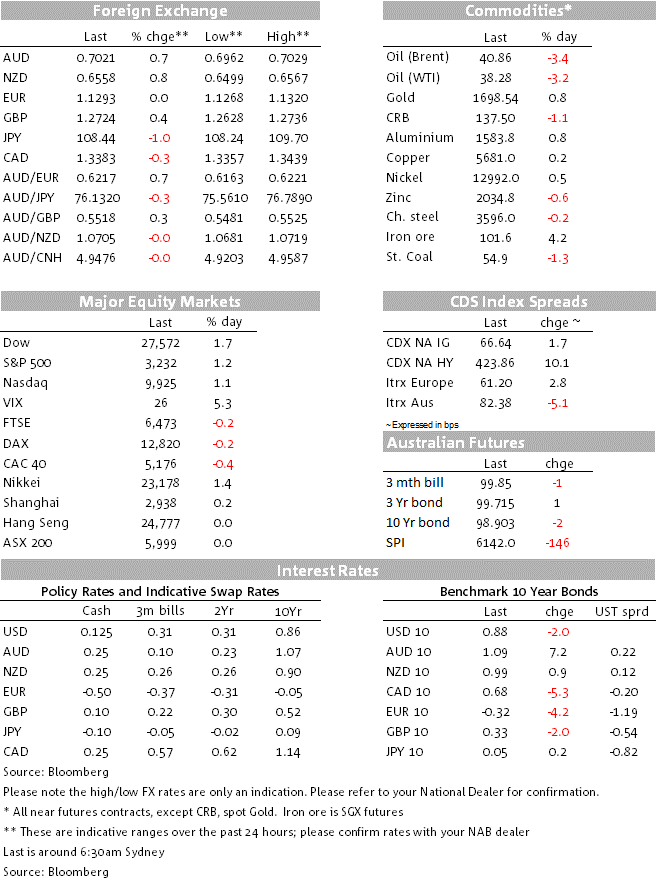