Nobody was expecting anything other than a bad GDP read from Japan but it was worse than bad.

Markets were very quiet overnight with the US closed for the President’s Day Public Holiday. Given the US holiday, most market moves occurred in Asia where Chinese stimulus measures (a 10bps cut to the MLF) and a more favourable COVID-19 track boosted sentiment. China’s CSI300 rose 2.3% and has now more than fully recovered from its 8% fall after it re-opened after the extended Lunar New Year break. European equities followed, with the DAX up 0.3%. Yields were little moved with German 10yr yields +0.0bps and UK 10yr GILTS +1.3bps. G10 FX was also barely budged with most major pairs +0.1% except for GBP which fell -0.3% to 1.3003. As we open for trade the AUD is unchanged at 0.6716 with the RBA Minutes the only major piece on the domestic calendar, while the papers lament the fall of Australian icon Holden.

Despite the absolute number of cases and deaths rising, the daily change in cases continues to be more favourable and playing into the view that containment measures in China are working and that the peak of the virus could be within sight. Daily new cases are slowly edging lower, while recoveries are trending higher and the number of deaths are trending lower for the 3rd consecutive day (see first chart below). Outside of Hubei, the number of new cases has also declined for 13-consecutive days. While the World Health Organisation still warns that it is too early to tell if cases are truly declining, markets are taking it as an encouraging sign and as is the case with past pandemics/epidemics are looking for signs that the virus may be peaking.

Focus is now shifting to the likely economic impact of COVID-19. With data sparse it is very hard to tell, though daily pollution levels are easily available and we note the cumulative pollution for the year is around 20-25% lower than this time last year (see second chart below). Overall that suggests a substantial decline in industrial activity in Q1. Encouragingly though, we have seen pollution levels tentatively tick higher over recent days, suggestive of industrial activity picking up and reports yesterday emerged of car manufacturers re-opening plants after the extended Lunar New Year break. Toyota re-opened two of its four Chinese auto factories and Samsung also said it would resume operations at a TV plant in Tianjin.

A ramp up in activity is likely to be slow initially though and a American Chamber of Commerce in Shanghai survey noted that 78% of companies do not have sufficient staff to run a full production line. The survey also noted a lack of staff will be the biggest challenge in the next 2-4 weeks for 41% of companies, while logistics are a concern for 30% of companies. Firms also note they have insufficient supplies to protect staff from COVID-19 infection with 38% reporting they do not have sufficient masks or other supplies (see AMCHAM-Shanghai for details).

Chinese stimulus measures are being drawn up and yesterday the one-year lending facility was cut 10bps to 3.15% from 3.25%. On Thursday the PBoC also meets to set the Loan Prime Rate where markets expect a 5bps cut. Fiscal stimulus measures are also being drawn up with weekend comments by Minister Liu Jun noting China would implement “targeted and phased” cuts to taxes and expenses for business.

Notions of stimulus boosted equities with China’s CS300 rising 2.3% and now more than fully recovering the 8% plunge after the extended Lunar New Year Break. The positive sentiment carried into Europe with the DAX and Eurostoxx both +0.3%. While the US equity market was closed, futures pointed to a 0.2% gain.

Japanese Q4 GDP surprised sharply to the downside, coming in at -1.6% q/q against -1.0% expected. The sharper than expected fall came mainly from October’s consumption tax increase and Typhoon Hagibis: consumption was -2.9% q/q, though business investment was also weaker than expected at -3.7% q/q. More worryingly, Q3 growth was downgraded to just +0.1% q/q from 0.5%, meaning Japan just very narrowly skirted a technical recession. The question now is whether Japan will actually record one with Q1 growth also likely to be weak on the back of COVID-19 impacts. Japan appears to be ramping up a cautious approach to the virus with the Tokyo Marathon scheduled for March 1 cancelled for amateur runners – normally 38,000 runners take part, the event now will be restricted to 176 elite athletes. There was little impact on USD/YEN (+0.1% to 109.93), though the Nikkei underperformed down -0.7%.

The US is said to be weighing up further restricting China’s access to US semiconductors. The WSJ reports officials are set to meet on February 28 with the Commerce Department drafting changes to the so-called foreign direct product rule, which restricts foreign companies’ use of US technology for military or national-security products. Changes could allow the department to require firms to get licenses if they intend to use American chips for Huawei – the definition of how much American-made is allowed under the rules is proposed to be reduced to 10% from 25% (see WSJ for details).

The UK’s Brexit negotiator David Frost said the UK would not align its laws with EU demands and that this is a red line for negotiations on the future trading relationship: “We must have the ability to set laws that suit us,” “It isn’t a simple negotiating position which might move under pressure — it is the point of the whole project.” GBP was the weakest G10 FX move overnight, down -0.3% and hovering around the 1.30 level. Until the future trading relationship is sorted it is hard to see how businesses in both the UK and Europe can plan with Europe likely to continue to underperform. 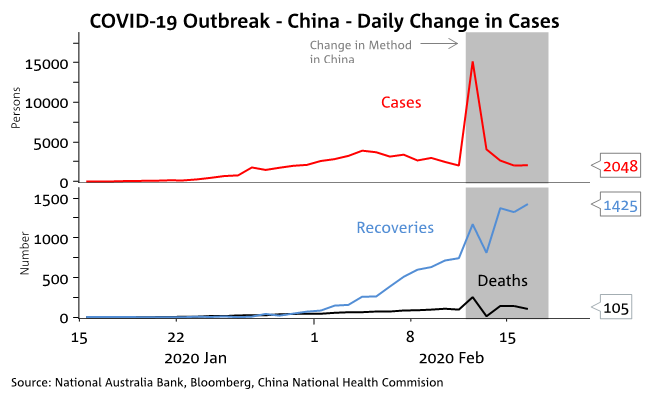 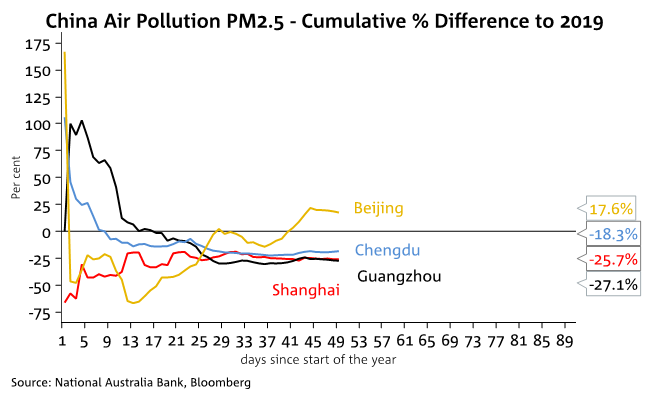 A mostly quiet day with only the RBA Minutes on the radar domestically. The Minutes recently have been more balanced in their discussion of risks than the optimism portrayed by RBA officials, as such a dovish tone is possible. Internationally it is quiet with only UK Employment and the German ZEW survey of note. 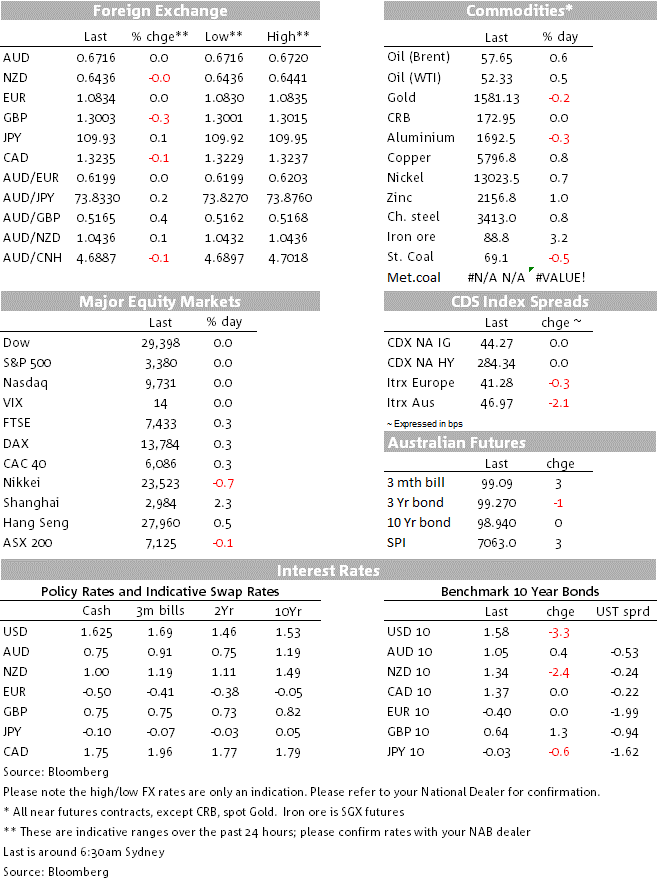