Overview: Dancing on my own

The word of the day is lockdown

A number of countries around the world have announced lockdowns in a bid to control the spread of COVID-19 with Germany and Australia the latest (NSW and Victoria announced yesterday), while around 1/3rd of the US population is also under lockdown (incl. NY, LA and Chicago). The economic shock is likely to be huge with the Fed’s Bullard noting that US GDP could fall 50% in Q2 and unemployment could soar to 30%, and arguing the need for a powerful fiscal response (see link for details). The key question for the outlook now is how long can we expect such containment measures to be in place? Australia’s PM ominously noted on Sunday that you should not put in place measures that you would not be prepared to have in place for six months. While the lesson from China and South Korea is that containment takes around 15-30 days after lockdowns have been implemented, with the lifting of measures only occurring in a very gradual manner.

FX continues to be volatile

Though the USD squeeze appears to have moderated a little given the implementation of a number of USD swap lines with central banks around the world (incl. Australia). The USD (DXY) is down-0.6% with both GBP (+1.4%) and EUR (+0.3%) up. USD/YEN though is up a little, +0.4% to 110.77, perhaps suggestive of a little lessening in the amount of risk aversion as well. The AUD remains extremely volatile, and while in the table below is down just -0.1%, it did trade in a 3 cent range from 0.5665 to 0.5985. My FX colleagues recently released updated forecasts of the AUD, noting it is now 30% below PPP terms and well in excess of the 16% deviation reached in the GFC. However, it has traded as far as 35% below in PPP terms, perhaps suggesting a possible low in the AUD of 0.53 in the current cycle. Our end-Q2 targets for the AUD is now 0.57, and then we see the AUD head into the low 60’s by the end of the year assuming the virus comes under control and China stimulus aggressively.

Other central bank actions have also helped with the liquidity squeeze that was underway with the flow abating/being accommodated with both gold and bonds rallying on Friday. Gold was up 1.8% while bonds rallied hard with US 10yr yields -29.5bps to 0.85%. The RBA domestically on Friday helped kick off the rally with the RBA buying $5bn of bonds across 2-8yr maturities, buying all bonds at 2-6bps through pre-operation levels with Australian 10yr yields declining 34.8bps to 1.14%. Earlier today the RBNZ also announced it will embark on a QE program worth $30bn, saying it will buy around $750m each week- though it will be $500m this week.

Fiscal authorities are also stepping up to the plate, announcing extensive fiscal stimulus packages. Australia was the latest, announcing a second package of $46bn (around 2.5% of GDP), just a week after the first package of $17.6bn (around 1% of GDP). Germany is planning a new €500bn bailout fund to rescue companies, which will include direct equity stakes and state guarantees to underwrite debts of companies affected by the turmoil, policies amounting to around 10% of GDP. In the US, a fiscal package in the vicinity of $2tn (around 10% of GDP) is currently being negotiated, though there are delays with House Democrats said to introduce their own proposal after disagreements around layoffs for companies accepting federal aid and preventing stock buybacks. The UK has unveiled a third emergency package, incl. a measure that would see workers whose jobs are at risk receiving up to 80% of their wage paid by the government (albeit capped).

The Australian states of NSW and Victoria announced yesterday a lockdown with details to be unveiled today. Germany also announced a lockdown yesterday with the closure of non-essential business and a ban on meetings of more than two people outside of the same household. A number of other countries have also implemented either full or partial lockdowns, including the US where 1/3rd of the population in states where Governors have ordered citizens to stay at home and allowing only essential services.

The halting of economic activity is likely to see equities come under further pressure. The S&P500 fell -4.3% on Friday and is down -32% from its February peak. While the decline is sharp, it pales in comparison to that seen in the GFC at -57% and during the dotcom crash at -49%. There are not many companies reporting this week, but Nike does report on Tuesday which will be watched closely as a barometer of discretionary spending, as well as how quickly factory production has resumed in China following the lifting of internal containment measures. As for when we can expect a turn around in stocks and the broader market generally, it is worth noting that during SARS in 2002/03, it wasn’t until a week after the number of new infections peaked.

As for the virus itself

There are now 329,25 cases with 14,376 now having died from the virus. Cases in the US have skyrocketed in recent days with improved testing with now 32,000 cases. New Japanese and Korean research on the virus finds that around 20-30% of all cases are asymptotic – i.e. have no symptoms – and this helps explain why the virus has been able to spread so quickly and why in South Korea where containment was reached they tested anyone who had close contact with a confirmed case, even if they had no symptoms (see SCMP for details).

All eyes will be on the NSW and Victorian state governments with the details of the lockdowns they announced due to be unveiled. A speech by RBA Assistant Governor Kent that was scheduled for today has been postponed to an unknown future date (note all RBA speeches that had been scheduled this week have been postponed).

The week ahead is busy with focus on US Jobless Claims on Thursday which are expected to skyrocket with some estimates suggesting they could rise to 2.25m from just 281k last week. Before then we get a slew of preliminary PMIs on Tuesday for Japan, Europe and the US which should all show steep declines if China’s PMIs for February are any guide. The BoE meets Wednesday, but having already undertaken aggressive action more focus will be on the outlook and the estimates of the impact of containment measures on the economy. Finally, Nike reports on Tuesday and will be closely watched for comments around the resumption of production in Chinese factories, as well as for the demand for discretionary retail. 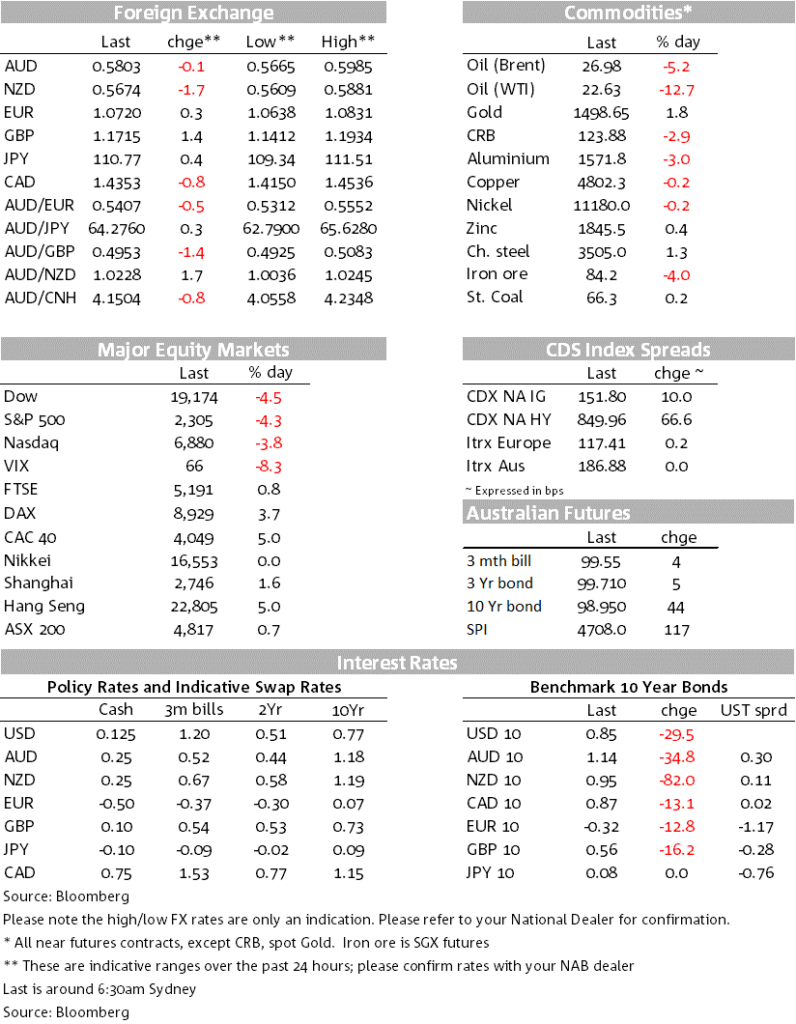