Markets continue to be torn between the good news and the bad news.

We were hoping for some romance, All we found was more despair
We must talk about our problems, We are in a state of Flux – Bloc Party

It has been a mixed night in markets

European equities closed slightly higher and US equities are currently trading marginally in the red. UST yields are a few bps higher with a soft 20y auction a factor at play and the USD is a tad softer with commodity linked FX leading the charge. AUD also outperforms but lags a little bit behind.

Markets remain in a state of flux as investors continue to be torn between positive vaccine news and negative virus driven lockdowns. Ratification of the EU recovery fund and EU-UK Trade negotiations are approaching crunch time with final outcomes still uncertain. Meanwhile President Trump is seeking a partial recount of Wisconsin with the US presidential election win not yet officially declared.

The positive vaccines news from Pfizer/BioNTech have stolen many of the headlines overnight but the reaction in markets has been overshadowed by news of rising virus infections and new lockdown measure. Pfizer/BioNTech gave an update of its phase-3 vaccine trial, with final results showing an improvement in its effectiveness from 90% to 95%, their vaccine protected people of all ages and ethnicities, with no significant safety problems so far in a trial that includes almost 44,000 participants.

The company will apply for US regulatory approval within days, which means distribution of the vaccine could take place before the end of the year if approval is authorised.

These positive vibes lost some of their ba ba boom once they were digested on the other side of the Atlantic. The vaccines news are a positive medium term impulse for the global economic outlook and investors are trying to weigh these news against the prospect of an imminent stalling of the European and US economic recovery amid the prospect of extensions of current lockdown measures in Europe (infection rates are certainly plateauing, but still remain elevated) and still surging infection rates in the US.

The US daily run-rate is now above 160k and a record 77k people being admitted to hospital. Ohio is the latest state to impose a nightly curfew, following a number of other states which have introduced fresh restrictions this week. As we go to print New York has confirmed it will shut down its public-school system on Thursday after virus infections reached a critical threshold.

So against this backdrop

US equity markets are trading marginally lower with the S&P 500 down -0.23%, although cyclical sectors such and industrial, financial and materials are still showing modest gains for the day.

The NASDAQ has been trading in and out of positive territory and is 0.01% as I type.

Moving onto the rates markets

Core yields in Europe closed unchanged (10y Bunds at -0.56%), but UST yields have edged a little bit higher with a soft 20y auction a factor at play.

Longer dated UST yields were rising ahead of the auction (seemingly making some room), but after the data revealed a bid to over ratio of 2.27, the second lowest since the start of the 20-year sales six months ago and a 0.9 bp tail, the move up in yields gained some momentum.

The USD is a broadly weaker and bit lower in index terms with commodity linked currencies ex AUD leading the charge. NOK is up 0.79% aided by a rise in oil prices up 1 %(WTI) and 1.53% (Brent), vaccines news seemingly outweighing news from EIA of a gain in US stockpiles.

Meanwhile, Bloomberg also noted that only 35% of Americans will be taking to the roads this year during the Thanksgiving holiday, compared to 65% last year, up 0.54according to GasBuddy.

NZD is also at the top of the leader board up 0.54%, after trading to a fresh 20-month high of 0.6940 overnights, the Kiwi now trades at 0.6936. A reflection of positive risk sentiment and the afterglow of last week’s Monetary Policy Statement, following which there was a sharp rise in domestic interest rates.

Contrasting virus stories probably explain the smaller AUD outperformance against the USD. The aussie currently trades at 0.7321, up 0.26% relative to yesterday’s levels. The spike in South Australia, with the six day statewide lockdown, has shown Australia is not immune.

The euro is unchanged at 1.1866, probably reflecting concerns that the euro area’s recovery will be held back by new virus-related restrictions, or the delay in ratification of the €750bn EU recovery fund, currently being held up by Hungary and Poland, two countries which oppose the “rule of law” condition.

The US election saga remains unresolved. President Donald Trump has sought a partial recount of votes in the state of Wisconsin which Joe Biden is projected to win by 20,000 votes and recount is currently under way in Georgia where Biden is 14,000 votes ahead.

The BBC notes the Trump campaign faces a deadline of 8 December to resolve all election disputes. Official results are set to be confirmed when the US Electoral College meets on 14 December. 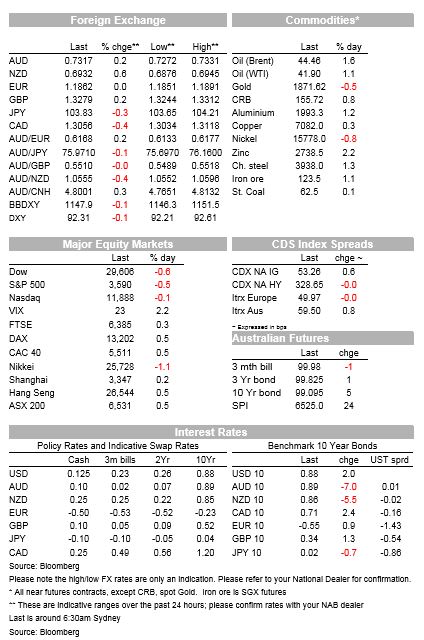