Markets Today: Lowe on QE; US equities up

RBA Governor Philip Lowe said QE wouldn’t happen in Australia until interest rates got down to 0.25%.

Overview: The signal and the noise

Somewhere out among the silence there’s a voice, There’s a feeling that takes over and it has no fear, When you’re caught between the signal and the noise -Simple Minds

US equities look set to record another positive day while the vibes coming from UST yields continue to suggest a need for caution, amid mixed US data releases. US-China trade news are still dominating headlines, but markets are becoming desensitised amid lack of concrete new news. Currencies are little changed with GBP underperforming. RBA Governor says QE ‘becomes an option’ at a cash rate of 0.25%, but we don’t expect to get there.

US equities look set to close the day at new record highs, albeit with modest gains for the day. The positive equity vibes appear to be supported by US-China trade headlines citing the China’s Ministry of Commerce confirmation that China VP Liu He, USTR Robert Lighthizer and US Treasury Secretary Steven Mnuchin had a telephone call and had, “reached consensus on properly resolving relevant issues and agreed to stay in contact on the remaining points for Phase 1. The USTR office confirmed the call but declined to provide further details.

Meanwhile UST yields have drifted lower again with the 2y rate down 2.6bps to 1.589% while the 10y tenor is 1bps lower to 1.744%. Amid a lack of new concrete news in the trade front, the bond market appears to have put more weight in US data releases which on the whole we would judge to be on the soft side. It is still early days, but the accumulation of evidence is pointing to a soft Q4 US GDP reading close to the 1%, well below trend growth of just under 2%.

US consumer confidence was weaker than expected, dropping for a fourth consecutive month but from a very high level. New home sales were strong, posting their best two months in more than 12 years, buoyed by low interest rates and a strong labour market, the caveat here is that housing construction only accounts for 3.7% of GDP.  The US goods trade deficit unexpectedly narrowed in October, on weaker imports, perhaps distorted by the timing of tariffs. The data will help improve running estimates of growth for Q4, but is hard to get excited when an improvement in the trade deficit is driven by a fall in imports.

Movement in currencies have been pretty subdued with the USD little changed. GBP has been the underperformer, down 0.33% to 1.2867 as opinion polls showed a narrowing lead for the ruling Conservative Party ahead of the Dec. 12 U.K. election. Commodity linked currencies are a tad higher ~0.10% with the AUD now trading at 0.6788 and NZD @0.6428 and CAD at 1.3279.

Last night RBA Governor Lowe delivered his much anticipated Quantitative Easing speech and in the end it didn’t have a longer lasting impact on the AUD, although we did see front end AU yields move lower. The Governor said that that QE ‘becomes an option’ at a cash rate of 0.25% and that, “there may come a point where QE could help to promote (Australia’s) collective welfare, but we are not at that point and I don’t expect us to get there.”. If the RBA was to venture into QE, the Governor made it clear that we would purchase government bonds (and semi-government), and would do so in the secondary market.

That said the Governor also emphasised that the RBA didn’t think QE was likely give current positive drivers in the economy such as “low interest rates, tax cuts, infrastructure spending, the better outlook for the resources sector, the pickup in house prices and the depreciation of the currency.”

Lastly Lowe also said that it was difficult to outline the conditions for QE to be triggered in Australia, nevertheless QE  would be considered if there were an accumulation of evidence that, over the medium term, suggested we were unlikely to achieve our objectives. In particular, if we were moving away from, rather than towards, our goals for both full employment and inflation.

NAB research suggests that, on its own, cutting the cash rate as low as 0.25% is unlikely to achieve the Reserve Bank’s goal of achieving full employment and inflation back above 2%. Thus unless we get a meaningful fiscal stimulus next year, then the RBA will have to consider QE as additional stimulus for the economy. 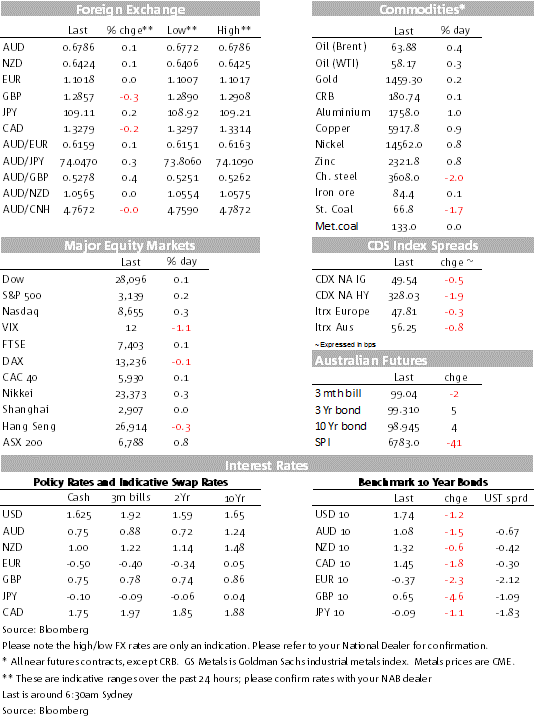 For the first time, we are now seeing contagion from the sell-off in Hong Kong and US-listed Chinese shares, to global markets – the NASDAQ in particular, ending the day down 1.2% in front of the earnings results from Apple, Alphabet and Microsoft.