It was a mixed performance across markets on Friday

US equities ending up slightly (S&P +0.34%) bond yields a touch lower (10-year Treasuries -1.3bps) and the US dollar softer (BBDXY -0.25%). Yet taking in the week as a whole, we had a highly unusual juxtaposition of weaker equities, weaker bond prices and a weaker US dollar.

Indeed, there has been only one other week since the start of April when the US dollar fell in a week that saw US equities lower (and there have now been nine down weeks for the S&P since the start of Q2). We are of course far more used to correctly presuming that if it was a down week for US stocks, it must have been an up week for the dollar. Ditto for bond prices. And not only was the US dollar weaker, its nearly 1% drop in index terms brought the Bloomberg BBDXY index to its weakest level since May 2018. Evidence, we’d suggest, that squinting through the day-to-day volatility, the USD has entered a long term cyclical (and secular) downtrend – one flip side of which is a firmer AUD.

Helpful to the cause of firmer European stocks on Friday at least – but not over the week where the German DAX was the worst performing major index – as well as the single European currency (extending the week’s gain to 1.2%) was the ‘flash’ PMI data. Here, the standout was the jump in the German manufacturing index to 58.0 from 56.4 (to its highest since April 2018) against an expected dip to 55.0. This is testament to the veracity of China’s post pandemic economic recovery and related demand for German exports, though reports of renewed hoarding of supermarket goods ahead of anticipated new lockdowns might also have been relevant. As pertinent for markets, a feared slump in services PMI readings failed to materialise. Sure, they were down in France, Germany and on the pan-Eurozone measure and softer than consensus, but not by much (e.g. at the pan-Eurozone level, 46.2 from 48.0 and the 47.0 expected, with the overall Composite measure only just back blow 50, to 49.4 from 50.4 in September.

The US PMI equivalent meanwhile (much less favoured by markets than the ISM surveys) saw a lift to both manufacturing (53.3 from 53.2) and more importantly services (56.0 from 54.6), both better than expected. The most negative of Friday’s PMI numbers was in the UK where services fell to 52.3 from 56.1 and manufacturing to 53.3 from 54.1, though negative market impact here was countered by the outsized, and much better than expected, 1.5% jump in September retail sales (but where hoarding might also have played a part?).

The jump in the EUR immediately following the German manufacturing PMI had favourable spill-over impact on AUD, albeit AUD/EUR was a tad lower on the day. The 0.3% gain in AUD/USD brought the rise on the week to 0.8%. This was outdone by the NZD which rose by 1.35%. We can blame AUD underperformance on the AUDNZD cross to the further pricing in of RBA easing speculation for next Tuesday, though its overall  performance tells us that much is now priced in. Indeed, in a research note published on Friday, we suggested that not only has AUD/USD fully discounted a cut to the Cash Rate and 3-year Yield Curve Control target rate to 0.1% from 0.25%, but a QE bond buying announcement in excess of $100bn.If so, this means we may need something bigger than the latter on the day, to prevent AUD actually going up not down just before the Melbourne Cup runners and riders leap out of the chute.

Of course, how the AUD fares next week if not this, will inevitably be bound up in USD performance either side of knowing the US election result (and if we don’t find out on November 4th, all hell might break loose in risk markets if the 2000 – Florida related – contested election is any guide.  As for the fate of a pre-election fiscal stimulus package, the mood music soured on Friday with the two sides said to still have some significant differences, though Nancy Pelosi at the weekend declared herself hopeful that a deal could yet be reached this week. Today, incidentally, the Senate will vote on Amy Coney Barrett’s Supreme Court nomination, now seen as a shoo in.

Friday’s small-scale US bond market rally couldn’t obscure the significant bear-steepening in the US curve over the course of last week, linked in part to anticipation of sharply increased bond supply under a Biden ‘blue wave’ election scenario – and where the 10-year Treasury yield ended up just shy of 10bps at 0.84%.

It was a week of sharply contrasting fortunes with base metals (ex-aluminium) mostly higher consistent with ongoing strong Chinese demand and a softer USD, but sharply lower oil prices primarily on demand concerns linked to northern hemisphere covid news and the associated impact on economic and social mobility. Gold was flat on the week, the softer USD notwithstanding. 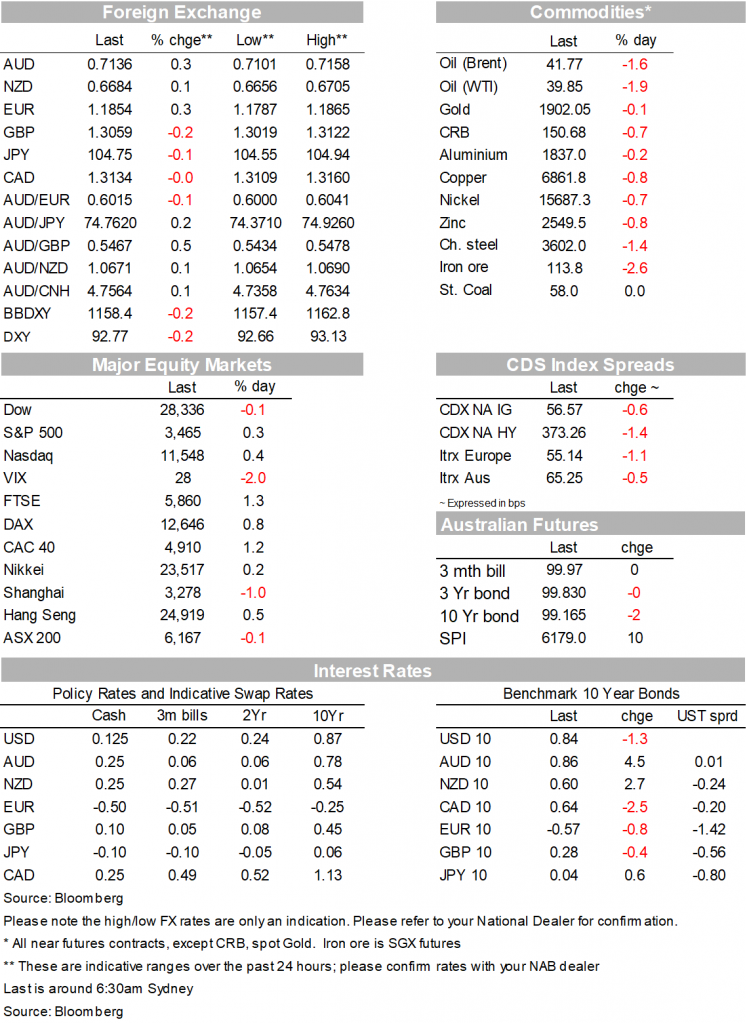