US retail sales were strong but t’s not all good news.

Overview: You can stand under my FOMC umbrella

US Retail Sales were strong, with the headline at +0.4% m/m against 0.2% expected. The Core Control Group which feeds into GDP was even stronger, +0.7% m/m against 0.3% along with upward revisions. The numbers suggest real consumer spending in Q2 could rise by up to an annualised 4.2% rate – well up from the 0.9% pace in Q1. So far it seems the industrial slowdown stemming from the trade spat is not spilling over to the larger services side of the economy for now. The warnings signs are there though with the Cass Freight Index in the red for the seventh consecutive month with June shipments -5.3% y/y, while Industrial Production for June was slightly lower than expected at 0.0% m/m against 0.1% expected (note manufacturing was +0.4% m/m). Following the numbers, the Atlanta Fed upgraded their Q2 GDP Now estimate to 1.6% from 1.4%, but still well below the 3.1% recorded in Q1.

The strong retail sales print had little impact on market pricing for a July rate cut with most Fed officials still lining up behind a cut; markets price 31bps for July while 2.7 rate cuts are priced by the end of the year. Overnight Chair Powell  reiterated his message about “carefully monitoring” downside risks to growth and that the Fed “will act as appropriate to sustain the expansion”. The Fed’s Evans (voter) also reinforced the messaging of needing to cut to boost inflation, stating “I think on the basis of inflation alone, I could feel confident in arguing for a couple of rate cuts before the end of the year”. The Fed’s Kaplan (non-voter) also hit the airwaves, saying a tactical adjustment “might be appropriate. I could see an argument for that”. In the words of that Barbados songstress: “told you I’ll be here forever, Said I’ll always be your friend, Took an oath that I’m a stick it out ‘till the end”.

GBP fell -0.8% to 1.24 on growing hard-Brexit/election fears with GBP at its lowest level since April 2017. Leading Tory remainer Grieve implied the only way to stop a no-deal was to precipitate a general election: “Blocking no deal technically may be quite difficult but as I’ve said on many occasions in the last 12 months, if the government persists in trying to carry out a no-deal Brexit I think that administration is going to fall”. The risk of such an outcome brings up a bunch of new issues, including the possibility of a Labour government, or even the possibility that the remain vote is split in the general election and you end up with a harder Tory/Brexit party being elected. The two leadership candidates continue the rhetoric of ruling out any compromise on the Irish backstop, while Johnson has also not ruled out shutting down Parliament at the end of October to stop MPs from blocking a no-deal Brexit. Markets largely ignored the stronger than expected UK Labour market data that saw average weekly earnings excluding bonuses up 3.6% y/y against 3.4% expected; unemployment held at a 44yr low of 3.8%.

Trade rhetoric remains on the strong side with no signs that tensions will abate anytime soon. China’s Commerce Minister who is part of the trade negotiations implied China is preparing for a protracted trade spat and is in no hurry to reach a deal at the expense of losing face: “The US has started this economic and trade dispute with us in violation of the principles of World Trade Organisation” and “We must make the best of the spirit of struggle, and stand firm in defending the interests of our country and the people, as well as the multilateral trading system.” President Trump meanwhile tweeted he could put further tariffs up against China.

Stocks remain resilient to the trade tensions, supported by aggressive Fed easing. The S&P500 fell -0.3% overnight, with the decline driven by energy stocks (following the sharp fall in oil prices), and by technology stocks. Overnight Trump said the “administration will take a look” into Google after billionaire Peter Thiel said Google should be investigated for working with the Chinese government. Tech stocks have been one of the biggest drivers of the rally, so regulatory headwinds should be a focus for stocks as well as the current earnings season. On earnings, while JP Morgan beat guidance, it cut its 2019 forecasts for net interest income.

In Australia, the RBA Board Minutes yesterday repeated the line that the RBA stands ready to provide further support “if needed” as it continues to watch the labour market. There is no clear signal on timing for another rate cut, but we expect a 25bp cut in November with the risk of an earlier move depending on the labour market and inflation (note: Employment is on Thursday and Q2 CPI is out on 31 July). Markets price a 16% chance of an August rate cut, while a rate cut is almost fully priced by the end of the year.

One brighter spot out of the Minutes was in regards to the Australian housing market, with the RBA noting some signs of stabilisation. A few banks have recently revised up their forecasts for the property market with “the street” now seeing the bottom in prices with very moderate rises over the next year. Some banks have also announced their new minimum serviceability floor – most settling around 5.5-5.75% and well down from the previous APRA guidance of the maximum of mortgage rate plus 200bps or at least a 7% minimum (7.25% was a common threshold). Following the APRA changes recently, the serviceability rate changes potentially give new potential borrowers a 15-20% increase in borrowing power – subject to other criteria.

Finally, the NZ CPI yesterday came in line with expectations and came and went with little fanfare. Headline CPI was 0.6% q/q and 1.7% y/y, while the more closely watched sectoral factor model held steady at 1.7% despite a tick higher in the alternative core measures (Trimmed Mean 2.0% from 1.8% and Weighted Median 2.3% from 2.2%). Markets continue to price a rate cut at the next meeting, being 84% priced.

In the US, earnings season continues with Bank of America and Netflix reporting Q2 earnings. Datawise it is a light day with only housing starts/permits (consensus 1260k/1300k, little changed from last month’s 1269/1294) and the Fed’s Beige Book. The Fed’s George (voter) is also speaking on the economic outlook with Q&A.

Canada has CPI where the core measures are likely to remain slightly above target with Trimmed Mean at 2.2% y/y, down slightly from 2.3% in May.

G7 Finance Ministers and Central Bank Governors also meat in France to discuss where they will be discussing risks in the global economy and the financial system, addressing emerging tax and digital issues, as well as taking forward efforts to reduce inequality (see G7 website for details). 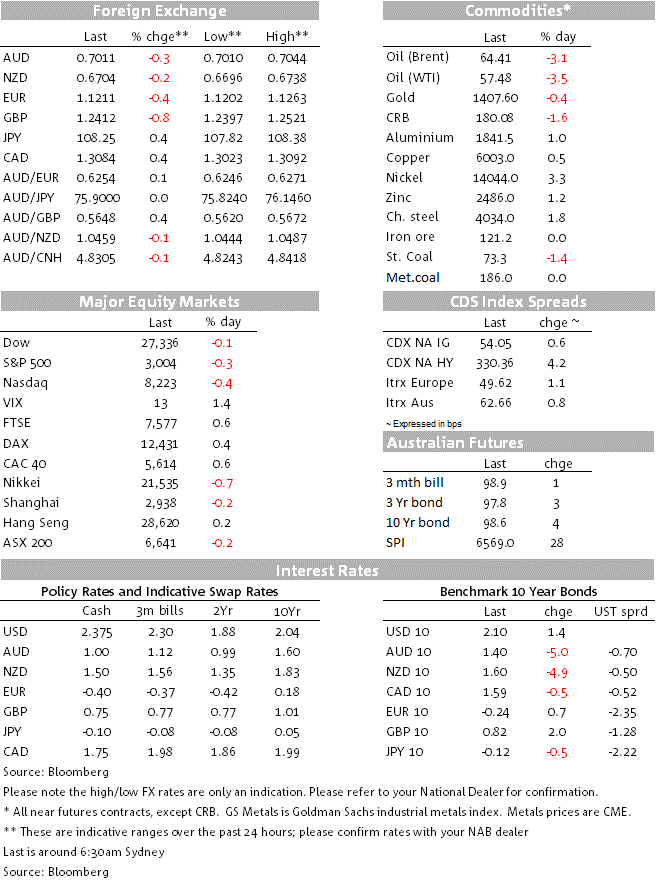