Overview: What did you expect from the vaccines?

‘What Did You Expect from the Vaccines’ was the debut album from the English indie rock band The Vaccines that became the biggest selling debut album of 2011 in the UK. I saw them at the Bowery in New York that year, and for much of this year I’ve been looking for an excuse to weave them into one of these morning missives.  The S&P500 looking like it will close out the month with double digit gains in a month that saw not one but two (or maybe three or more) vaccines close to being ready to roll out, seems like as good a reason as I’ll get.

Compared to where we were at yesterday’s local close

US stock are lower, US bond yields are little changed and the USD is firmer, albeit only by about 0.1% in BBDXY index terms. AUD/USD, which traded briefly back above 0.74 during the Sydney morning, is down half a cent to around 0.7350.

Most of the losses for the AUD (and gains for the USD) came either side of the 4pm London month-end ‘fix’ , where in the lead up there had been anticipation of potential large-scale USD selling/AUD buying given the extent of gains in the US stock market during November and therefore a need for asset managers who hedge a portion of their overseas asset holdings back into the AUD to sell USD to top up their hedges in order to remain close to their benchmarks.

We’d therefore argue that AUD strength in the past week or so owes something to anticipation of this demand, such that when the day arrives much of it has already been fulfilled. A classic case of ‘buy the rumour, sell the fact’.

We can’t dismiss out of hand any impact on sentiment towards the AUD due to the further deterioration in Australia-China diplomatic relations in the past 24 hours, exemplified in the headline in The Australian this morning, viz: “China ties at 50-year low over ‘repugnant’ tweet” , implying that international relations are now the worse they have been since the Whitlam government first established diplomatic ties with China in 1973.

While China’s tariffs and other impediments to Australian exports are obviously devastating for the sector involved, at the macro-economic level, unless – and unlikely in our view – iron ore and, once international borders re-open, tourism and education exports to China are impacted, the fall-out on the overall economy and Australian markets should remain relatively limited.

AUD slippage overnight is only surpassed by the SEK and NOK, the latter after the OPEC+ ministerial meeting failed to agree on rolling forward current production curbs (for three months, as had been proposed by the ministerial  committee that met at the weekend). Crude oil is off 60-70 cents, though ministers are coming back Tuesday to continue their meeting, so agreement might yet be reached.

At the other end of the G10 FX spectrum

GBP continues to ride high, up another 0.2% since the weekend to just shy of $1.3350. This despite there being no corroboration to yesterday’s news in the UK Daily Telegraph that a deal on fishing rights had all but been agreed, one of the key stumbling blocks to an EU-UK trade deal. EUR/USD was also faring well, briefly trading above $1.20 before falling back after the afomentioned London fixing.

We’ve had German CPI coming in at -0.7% down from -0.5% and below the -0.4% expected, in front of today’s pan-Eurozone numbers. This puts German deflation at the same -0.7% rate as Japan, judging from last week’s Tokyo numbers at least.

Into the last hour of NYSE trade 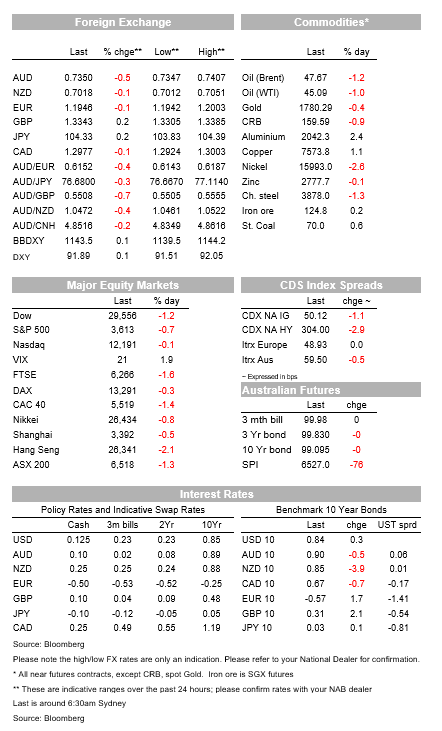