How far do US stocks need to fall before the President takes note and tries to resolve the US-China dispute?

Overview: Tired of you

The equity rout continued overnight with major European indices down over 1% across the board while main US equity indices also closed lower. The rally in core global bond yields also extended overnight, but while UST yields are lower along the curve, late in the session a very soft 7y UST auction arrested the decline, suggesting signs of exhaustion in the recent rally. The risk aversion environment has favoured the USD with DXY back above 98 while NZD has been the underperformer.

10y UST yields traded to an overnight low of 2.2098%, but a soft 7y auction with a tailed almost 2bps, sparked a reversal in fortunes with the 10y tenor jumping over 5bps in the latter part of the overnight session. 10y UST yields now trade at 2.264%, just 0.6bps lower relative to yesterday’s closing levels. The lack of demand in the action could be a sign of rally exhaustion and although the macro picture has not really changed is worth noting that the decline in UST yields since the start of the month has been a leading indicator of what has become a broader risk aversion environment amid signs of global growth slowdown and heightening US-China trade tension which has now expanded to technology and rare earth. These at early days, but  may be UST yields have gone far enough for now.

Market expectations of Fed rate cuts have continued to build with the market now pricing an almost 80% chance of a September rate cut, with 40bps priced by the end of this year and over three cuts by the end of 2021. The rates market looks reasonably well-priced for a series of “insurance cuts” by the Fed. The Richmond manufacturing survey was out last night and it showed a moderate improvement in manufacturing activity across the mid-Atlantic states. The index rose to 5 from 3,  just below market expectations of a 6 outcome. Worth noting too that the survey reported firms remaining optimistic about growth in spending and business conditions in the coming months. Next week we get the ISM survey and Fed Chair Powell also speaks both will be important in terms of whether they support or not current Fed pricing.

Rates markets elsewhere have gone the same way as the US, with a 5bp fall in Australian and NZ government bonds yesterday and a 2bp fall in German bunds overnight to -0.18%.  The Australian 10 year government bond reached 1.48%, inverting to the RBA cash rate.  In NZ, the 10 year swap reached 1.935%, with the market now pricing a better than even chance that the OCR falls to 1% by early next year.  Yesterday’s NZ ANZ Business survey was disappointing, with only a small bounce in both the own activity and headline business confidence readings, despite the government’s decision not to go ahead with its proposed capital gains tax.  Our BNZ economics team noted that, at face value, the level of own activity is consistent with annual average GDP growth of around 1.5%, below both our and the RBNZ’s forecasts, while the plunge in residential construction intentions, to the lowest level in a decade, implied big downside risks to the residential investment outlook.

US equities ended the day lower, but a look at the intraday chart shows that all major US indices overturned some of the intraday loses as UST yields reversed course. Early in the session for instance, the S&P500 was down1.29%, but it closed the day at -0.69%. The index flirted with a move below its 200DMA, but in the end it managed to close just above its key support.

The news flow in the trade front has not really improved, in fact if anything editorials from well-connected Chinese newspaper warned the United States on Wednesday that the country was ready to use rare earths to strike back in their bitter trade war, saying in an extremely strongly worded commentary “don’t say we didn’t warn you“. Many have suggested this wording is a signal that China is preparing itself for a protracted trade war while also noting The phrase “Don’t say we didn’t warn you” was only used two other times in history by the People’s Daily — in 1962 before China’s border war with India and ahead of the 1979 China-Vietnam War.

As for currencies, the USD has benefited from risk off environment showing gains against most currencies and also climbing higher in index terms with the DXY index back above 98 almost knocking on its 1y high of 98.37. In G10,  SEK was the one exception (+0.51%), outperforming after a better than expected Q1 GDP print (0.6% vs 0.2% exp.) while NZD was the underperformer down 0.46% over the past 24 hrs and now trading at 0.6512. AUD on the other hand is essentially unchanged and now trades at 0.6918, the currency traded down to an overnight low of 0.6904, but then recovered later in the session as US equities retraced some of their losses taming some of the risk aversion tone evident since the start of the session.

JPY and CHF are little changed in spite of the risk aversion environment, but  EUR  is 0.23% lower and now trading at 1.1131 As had been widely foreshadowed, the European Commission formally issued a letter to Italy’s finance minister informing the government that it hadn’t “made sufficient progress towards compliance with the debt criterion” and asking for an explanation. This is the first stage of a process that could ultimately end up with Italy entering excessive deficit proceedings, if the government does not make sufficient changes to its Budget, and receiving a fine from the EC.

In central bank news, the Bank of Canada kept rates on hold at 1.75% as universally expected by analysts and the market.  The Bank said current policy settings were “appropriate” and that recent data reinforced its view that slow-down in growth late last year and early 2019 was temporary.  That said, the Bank highlighted that “trade restrictions introduced by China are having direct effects on Canadian exports” and broader trade tensions were “heightening uncertainty.”   The CAD initially fell after the statement, but has since recovered, while shorter-dated Canadian bonds are a few basis points lower on the day.  The market prices a 75% chance of a rate cut over the next year by the BoC.

Special Counsel Robert Mueller broke his almost 2y silence saying that he couldn’t reach a conclusion on whether President Donald Trump obstructed justice. Mr. Mueller said “The Constitution requires a process other than the criminal justice system to formally accuse a sitting president of wrongdoing,” adding that “Charging the president with a crime was therefore not an option that we could consider,”.

The capex data includes information on equipment investment in Q1, which accounts for around 4% of GDP. NAB expects this component grew by 1.3%, driving a 1% rise in total capex.

NAB expects firms will revise estimated spending in 2018/19 to $120b, implying little growth in investment in the year.  The second estimate of firms’ spending in 2019/20 should be revised up to $92b, which implies a decline in investment of about 3% once we adjust for bias in firms forecasts of their spending.

Our economists anticipate another decline in building approvals (-5%m/m) led by apartments (-15%m/m). Alongside slowing credit growth (0.2% m/m), these data are likely to show an ongoing deterioration in the housing market 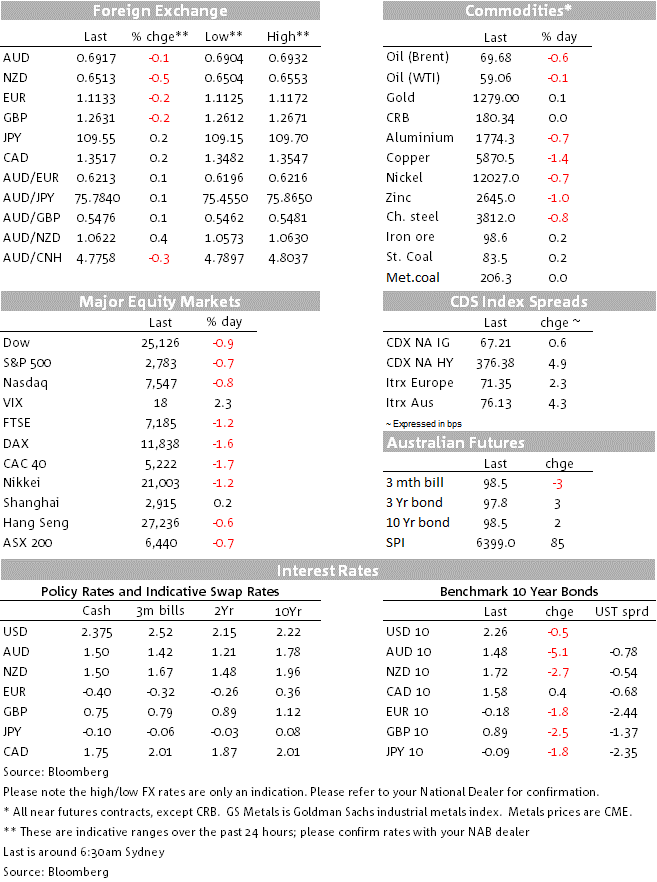