UK markets have shown bigger moves than most others in the last 24 hours, in both stocks and currencies, on the positive news of Pfizer-BioNTech’s COVID-19 vaccine having been approved for use in the UK and to be rolled out from next week, while reports this time yesterday that UK-EU trade talks had entered the ‘tunnel’ as a precursor to finalising an agreement, proved wide of the mark.

The UK FTSE is top of the global equity leader board with a rise of 1.2% while stocks elsewhere are mostly little changed; GBP is at the bottom of the G10 FX scorecard (-0.5%) having been up half a percent the day before.

The USD overall is not much moved, while US bond yields have pushed higher on hopes a fiscal stimulus plan could yet be agreed before the new President and Congress are sworn in in January.

Seemingly one of the benefits of the UK no longer being in the EU has been that it has been able to by-pass the European Medicines Agency (EMA) and be the first to approve the Pfizer-BioNTech vaccine for public use.

US FDA approval might come as early as Dec 10 and Moderna’s a week or two later, according to latest reports. No news about possible approval in the EU and where Germany has just announced that its current partial lockdown will continue until at least January 10.

This time yesterday we were trumpeting a report from Times Radio in the UK that trade talks with the EU had entered the ‘tunnel’, which if true signified that both sides had reached a point in negotiations where the principles of an agreement had been reached and now it was just a case of formulating a legal text for approval by EU head of state (as early as next week’s Dec 11-12 EU Summit).

Not so fast. This report proved  misplaced, with France in particular reported to have warned chief EU negotiator Michel Barnier about ceding too much ground on one or more of the thorny issues of fishing, level playing field and enforcement mechanism and suggesting that the EU should be threatening a ‘no deal’ Brexit to try bring the UK side round. The net effect of which has been to see the pound’s 0.5% gain on Tuesday turn into a 0.5% loss on Wednesday.

Not much hard news around elsewhere

On US fiscal stimulus hopes, markest yesterday were energised by the tabling by Republican Senators of a $980bn bill which for one would extend extra unemployment befits through Jan 31st at at least but not provide for another one-off cash payment. We’ve not heard from House Leader Nancy Pelosi as yet on her views of the bill so whether or not it stands much chance of passage is very much up in the air. US bond market however, that saw yield rise quite smartly following the news of the bill yesterday, have extended their yields rise overnight, to as high as 0.96% from 0.92% at Tuesday’s close (currently back to 0.94%).

Economic news overnight saw much stronger than expected German retail sales in October (+2.2% on the month to be 8.2% up year-on-year, well above the 5.8% consensus) and the US ADP employment report at 370k, below the 440k consensus but probably not enough to meaningfully alter consensus expectations for tomorrow’s non-farm payrolls (475k).

The just-released Fed Beige Book ahead of the mid-December FOMC meeting, notes signs of slowing in activity in some regions in November.

FX markets see AUD at the top of the G10 scoreboard with a gain of 0.5% on Tuesday’s New York close to be back just above 0.74.

There was no reaction yesterday to either the better than consensus Q3 GDP outcome of +3.3% or RBA Governor Lowe’s testimony in which he declared himself open-minded on what happened to the current QE programme upon its May 2021 currently scheduled expiry.

Upside economic surprises – as the RBA received yesterday, Governor Lowe hoping for something with a two in front of it before its release – could influence the need to extend it, but so too would what other central banks are doing as well as how well bond market are functioning (bearing in mind the supply onslaught that awaits markets next year).

Into the last hour of NYSE trade

US equities are currently showing a 0.2% gain for the S&P and hardly any change in the NASDAQ. In commodities, oil is back higher on reports that OPEC+ might have made progress toward agreeing on extending production curbs, ahead of their formal meeting later today.

Final PMI services and composite readings are due in most parts of the world – they are rarely market moving. Of keener interest is first the China Caixin services PMI, expected at 56.4 from 56.8, then the US services ISM, seen at 55.8 in November from 56.6. Also weekly jobless claims. 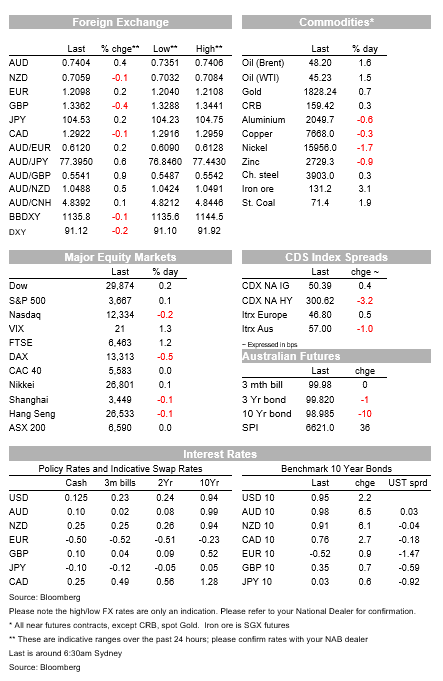 If the market is rethinking how soon the Fed might lift rates, there was nothing from incoming Fed speakers overnight to support this view.