Markets Today: Moving on from GameStop, back to abnormality

In normal times an episode like the Reddit induced short squeeze would eventually see markets return to normal.

The disconnect between equities and other asset classes, be that bonds, currencies or commodities (and between the USD and commodities) has again been evident at the start of the new week. We have strong gains for equity indices offshore, including a 2.5% rise for the NASDAQ in front of tomorrow’s Amazon and Alphabet earnings, despite which the USD is firmer across the board. But, unusually, oil is smartly higher, while bonds are little changed. Local focus today is on the RBA.

Outside of the Reddit-obsessed retail community, appear to have decided over the weekend that the collective actions of the latter in attacking publicly known large short positions held by hedge funds, including whatever they do next (silver was the story either side of the weekend) doesn’t pose a systemic risk capable of being the dominant influence on the broader market on a significant or sustained basis.

Only time will tell, but suffice to say that we have a much more mixed performance by the recent darlings of the Reddit crowd (e.g. GameStop down 25%, AMC Entertainment up 7%, while silver is currently also up 7% but was 11% higher on the day at one point). Maybe it’s not quite so easy after all, certainly once stock market valuations have become so divorced from reality – or rather so far beyond what the magic of a zero risk-free rate can do for risk asset valuations – and the objective of squeezing hedge fund investors out of their shorts has by and large been achieved  (Bloomberg reported that short interest in GameStop had been slashed, to 40-50% of the amount of stock on issue, compared to more than 100% in mid-January). After that, asset price gains are surely wholly dependent on the greater fool theory?

All eleven sub-sectors of the S&P500 are in the green and ‘Consumer Discretionary’ and ‘Communication Services’ have fared almost as well as Information Technology, all up by between 2% and 3% an hour ahead of the NYSE close. Earlier, European bourses all ended in the green, the Eurostoxx 50 up by 1.5%. Here, some signs of improvement in the relationship between the covid-19 vaccine makers and EU governments are evident (the drug companies saying they will step up deliveries).

On the negative side of the ledger, German retail sales plunged by 9.6% in December as a result of the imposed strict pre-Christmas lockdowns, much worse than the -2% expected and leaving the level of sales only 1.5% above year-ago level down from 5.6% in November (well below what other countries have reported, given the goods-centric nature of retail sales and diversion of spending away from locked-down service sectors).

COVID relief plan and the counteroffer

There has been little by way of new news regarding President Biden’s proposed $1.9tn COVID relief plan and the $600bn counteroffer by a group of 10 Republican Senator over the weekend, after the president on Sunday offered to meet with them.

The bigger data point overnight was the US Manufacturing ISM, which came in beneath expectations at 58.7 versus 60.0 expected and 60.7 last time, weakness led by a fall in the new orders component, down to a (still-strong) 61.1 from 67.9. US ISMs, manufacturing at least, typically lag China-equivalent data, so the falls reported in both the official China PMI on the weekend and the Caixin version yesterday (to 51.5 from 53.0, its second consecutive monthly drop) looks to be relevant. Eyebrows were raised over the jump in the price paid component, to 82.1 from 77.6, though this series tends to correlate with oil prices (much stronger during the month) and the news failed to produce any fresh up-lift in market-implied inflation exactions (10-year break evens were down 0.5bp to 2.0966%, while nominals were up 1bp to 1.075%). Earlier, final Markit manufacturing PMI readings for the UK, EU and US all came in a touch stronger than the ‘flash’ readings.

The USD is firmer across the board, meaning another day of disconnect from risk sentiment at least as measured by US stock indices and the VIX, and where the weakness in EUR/USD soon after the German retail sales data looks to have bene one factor (hence the EUR-centric DXY index is up 0.5% against a lesser 0.25% for the BBDXY).  GBP out in a good showing earlier Monday before slipping back, positive news on vaccine roll-out one factor (more than 14% of the population had received at least one dose by the end of the weekend, well ahead of all other countries bar Israel). A sustained break of $1.3750 was a bridge too far on GBP/USD though.

AUD picked itself up of the floor on Monday after threatening a break of 0.7600 early on (following the weekend China PMI news and the sharply lower open for US stock index futures) but struggled to hold the break above 0.7650 (0.7634 now).  Yesterday’s local data was strong, December Home Loans up 8.6% by value vs. 4% expected. While strength has been driven by owner-occupiers to date (8.7% m/m), investor activity is picking up (8.2% m/m). All consistent with strength in the housing market seen in other indicators, and which also showed up yesterday in the CoreLogic January house price  data showing an average 0.7% nationwide gain (+1.7% yr./yr., so putting prices further ahead of their pre-pandemic highs).

There doesn’t seem to be any specific driver for the near $1.50 gain for both Brent and WTI crudes, beyond broader market confidence in demand strength later in the year, in which respect Saudi Aramco was out saying it saw demand recovering to pre-pandemic level before the end of 2021. 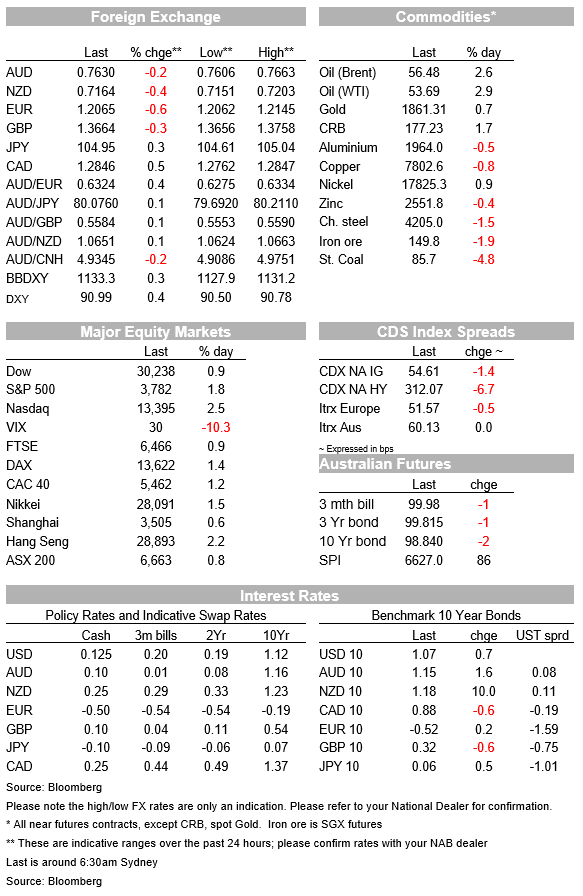