Markets Today: Multi-year highs for the Aussie Dollar and Sterling, whilst US yields shoot higher

There was a big rise in the Aussie dollar and the pound on Friday, both reaching multi-year highs.

Don’t stop to ask, And now you’ve found a break to make at last, You’ve got to find a way, Say what you want to say, Breakout – Swing Out Sister

The standout feature of Friday’s markets was the surge in the AUD, breaking clean above its prior 0.7564 – 0.7820 year-to-date range to end the week at 0.7877.  Bond yields continued their upward ascent, globally and in real terms on rising H2 2021 economic optimism, which looks to be starting to spook the US equity market somewhat, though sector rotation into smaller cap and cyclical stock was the bigger story Friday. Metals prices remain on a tear, led by a 4.4% rise for copper, bringing its weekly rise to 7.7%. ‘Flash’ European manufacturing PMIs surprised significantly to the upside (Germany especially) while services in the US and UK are proving resilient in the face of more stringent social distancing restrictions since the turn of the year. Relative strength in UK PMI’s alongside the vaccine roll-out news allowed the market to overlook an 8.8% plunge in core retail sales, GBP/USD rising above $1.40 for the first time since April 2018.

Too numerous to mention, but are listed below for reference and where the standout was the rise in the German manufacturing PMI to 60.6, last seen exactly three years ago (February 2018), and which together with strength in French and pan-Eurozone manufacturing readings held up the Composite PMIs in the face of (modest) further weakening in service sector readings. US Markit PMIs were overall little changed (small fall for manufacturing but rise for services) while the UK also surprised to the upside in manufacturing (54.9 from 53.1) while the rate of contraction in UK services was sharply curtailed (rising to 49.7 from 42.0).

Since we left off on Friday include reports that the BioNTech/Pfizer Covid-19 vaccine no longer needs to be kept at ultra-low temperatures colder than the Antarctic winter. The FT reported new results that will allow distribution to be dramatically expanded to doctors’ clinics, pharmacies and more remote regions. Stability data, which the companies have submitted to the US regulator, show the shot can be kept at normal medical freezer temperatures of minus 15C to minus 25C for up to two weeks, compared with the previous required storage conditions of between minus 60C and minus 80C.  (On a less positive note, on Thursday the FT said that the BioNTech/Pfizer Covid-19 vaccine appears to be significantly less effective against the virus variant that emerged in South Africa, according to a study published on Wednesday. Recall that a few week prior, the same thing was said of the Astra-Zeneca vaccine).

UK media reported that PM Boris Johnson plans to announce today that every adult in the UK should be offered a COVID-19 vaccine by the end of July, and that by Easter, according to the UK Telegraph, some easing of restrictions of gatherings (outside) by more than one household could be put in place. Globally, over 200 million vaccine doses have been given. Vaccine roll-out in Australia and New Zealand has now begun.

Friday saw the AUD slice easily up though its previous year-to-date high of 0.7820 to 0.7877, its highest level since March 2018 and a gain of 1.3% on the day, comfortably exceeding its nearest rival, the NZD, which was up around 1% to touch, but not exceed, its YTD high of 0.7315 (it’s around 0.7290 now). As well as the break above the YTD high exciting technically based traders, the seemingly unrelenting strength of commodity prices is doubtless a factor (see below) and which in recent days has served to push our medium term fair value estimate for AUD/USD up to 80 cents.

Also notable on Friday was GBP/USD punching above $1.40 for the first time since April 2018. Recovery from very undervalued levels ever since the 2016 EU Referendum, positive vaccine roll-out news and (last week) the paring back of expectations for negative UK interest rates, have all had a hand in Sterling’s rise.

Of some note Friday is that the USD failed to gain any support for the latest rise in US bond yields, where 10s were up another 4bp on the day to finish the week at 1.34%, the prospect for massive fiscal expansion still a key background driver. Also of note is the fact that the rise in the past couple of weeks has been in real (inflation expectations-adjusted) terms whereas year to date most of the rise in nominal yields has been matched by rising US inflation expectations.

Here, we would note that while 10-year US real yields have risen by some 21bps since the start of February, the equivalent EU (German) benchmark real yield has risen by some 28bps.  Also of note that Australian 10-year yields are rising much faster than the US (21bp last week versus 12bps for the US). The decline in the (real) AU-US yield differential orchestrated by the RBAs policy actions last November have all but evaporated (and such that the earlier suppressing impact of yield spreads on the AUD has just about fully reversed).

Equity markets in the US on Friday ended with little change for the major indices (S&P 500 -0.2%, NASDAQ +0.1%- but strong gains for smaller cap and cyclical stocks, seen benefiting most from economic re-opening. The Dow rose by 1% and the smaller cap Russell 2000 by 2%. Within the S&P, financials were one of the few sector gainers and where steeper yield curves are undoubtedly the driver, in large part for what they can do for banks’ net interest margins. Here, it’s also worth noting that European stocks have now started outperforming the US and given that the likes for the Eurostoxx 50 benchmark is bank heavy, not too surprising perhaps. Most of the benchmark European country indices were up close to 1%, the Eurostoxx 50 itself 0.9%.

Commodity price moves on Friday and over the course of last week offer more than adequate explanation for the outperformance by the AUD. It is not just copper, which grabbed the headline with its 4.4% daily rise and 7.6% weekly gain, but the broader base metals complex. The LMEX base metal index jumped by 5.5% on the week and while iron ore and oil both pulled back on Friday, iron ore price still ended the week +2.8% and Brent crude over 0.7% (WTI -0.4).  Gold was fairly flat Friday but 2.5% down on the week and where it would be remiss not to mention the $10,000 rise in the price of Bitcoin last week as one factor. 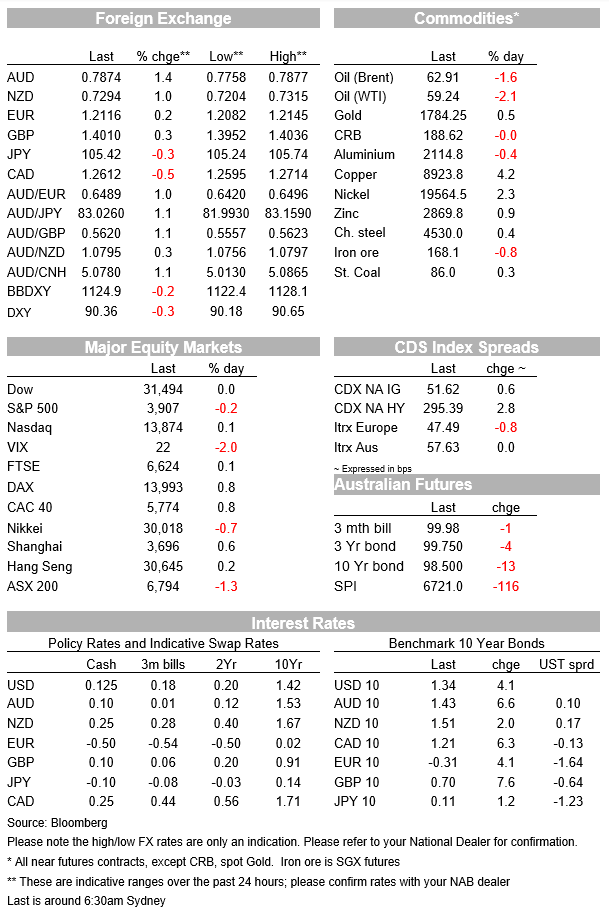