News Saturday of multiple drone attacks on Saudi Arabia Abqaiq petroleum processing facility (the largest in the world and responsible for refining more than 50% of 5.7million barrels of Saudi production, is set to reverberate through global markets this week. The US continues to insist that Iran was directly responsible for the attacks despite the immediate claim of responsibility by Houthi rebels from Yemen.  As we go to send, Saudi officials are suggested than cruise missiles may have been used in the attacks while US officials are saying that the attacks appear to have come from a west-northwest direction, not south from Yemen.

One thing we can say with confidence is that if that part of the reason for last week’s fall in oil and improvement in geopolitical risk sentiment was the news of John Bolton’s sacking as President Trump’s national security adviser and thoughts this was a precursor to some form of rapprochement between Trump and Iran, then it is no longer valid!

One immediate question this poses for bond markets is whether a further rise in so-called break-evens, or the inflation expectations component of bond yields which have proved historically sensitive to oil prices, will give this month’s sharp bond market sell-off fresh impetus, or whether safe haven considerations will dominate to drive yields lower?  Watch this space (though note with Japan closed today, there will be no cash Treasury trading).

In currencies, the immediate impact of the Saudi news has been to see both the JPY and CAD jump by about half a percent each, JPY on expectations of a significant ‘risk-off’ start to the  week and CAD in anticipation of sharply higher oil prices.  AUD is some 0.2% weaker, so the AUD/JPY cross, that had risen by some 2% last week, is already down three-quarters of a percent.

As for markets at the end of last week, bond yields continued their march higher, US treasuries by 13bps at 10 years to 1.90% and the 2-year up 8bps to 1.80%.  Benchmark Eurozone bond yields were also smartly higher, both on the pull from higher Treasury yields and ongoing reverberation from the public dissent by so many ECB Governing Council members to last week’s meeting outcome including the announced re-start of a €20bn per month QE bond buying programme.

Equity markets have so been largely unfazed by the scale of the rise in bond yields, US indices ending Friday fairly flat but all indices globally up on the week (led by a 3.7% rise in the Nikkei, in turn befitting from the tailwinds of a weaker, US bond yield-driven, JPY.  A chunk of these gains are unlikely to survive the week (though Japan stocks  will be closed today).  The S&P500 ended the week up 1%, the Dow 1.6% and NASDAQ 0.9%. Energy stocks at least should benefit from windfall price gains at the start of this week, with expectations of significant inventory draw-downs as well as direct price gains apt to support stocks in this sector.

The biggest driver of last week’s risk rally was of course hopes for an ‘interim’ if time-limited Sino-US trade deal following the meetings due to take place in October.   President Trump gave succour to this view early on Friday morning our time when he said at  White House press conference that “It’s something we would consider, I guess”. There have been no (public) development on this front at the weekend as best I can see, though note China was on holiday Friday so we should be hearing from officials there today.

US data on Friday was generally positive, August retail sales were +0.4% m/m in Aug, above the +0.2% consensus with July revised up to 0.8% from 0.7% and June to 0.4% from 0.3%. The key control series which feeds into GDP (ex-autos, gas, building materials and food services) was +0.3%,  matching the consensus but still impressive after the 0.9% July rise.

The University of Michigan sentiment index rose to 92.0 from 89.8 in August, slightly above the 90.8 consensus.  The gain only partially reverses the August drop however and the trend is down notwithstanding ongoing employment gains and (real) wage gains. For those of a glass half empty persuasion, we’d also note that that the trend in the NFIB survey (small business optimism) is also trending down, and that the manufacturing ISM went below 50 in August (in which respect, industrial production data this week will now be of keen interest).

Also supporting the improvement in risk sentiment last week, and UK markets/GBP in particular – last week’s biggest currency gainer with a 1.2% rise – were rising hopes that some sort of deal on the Irish backstop might be cobbled together that in turn would allow for something akin to ex-PM Theresa’s May’s Withdrawal Agreement gaining parliamentary approval before the end of October. This was after the Northern Ireland DUP hinted as some preparedness to review the issue.  UK PM Johnson has written an OpEd in the Daily Telegraph today saying he believes he can strike an EU deal within weeks but repeats that the UK will leave the EU on October 31st ‘deal or no deal’.

Finally, CoreLogic weekend auction clearance rates remain elevated on slightly higher auction volumes, albeit largely seasonal (1,633 versus 1,533 last weekend).  The nationwide capital cities clearance rate was 75.7% versus a final 72.3%. Melbourne cleared a preliminary 75.7% vs last weekend’s final 74.0% and Sydney 80.3% versus 75.7%. So final rates should be similar to, or in the case of Sydney potentially higher, than last week.

Beyond oil and related risk-sentiment developments, it’s a big week ahead that has the FOMC rates decision and new forecast in the early hours of Thursday morning, shortly followed by the August Australian labour Force survey that may or may not determine the outcome of the early October RBA meeting.  We also have NZ GDP and the latest Bank of Japan decision, also both on Thursday.

NZ’s performance of services index is also today(last at 54.7).  RBA August Board meeting minutes are tomorrow, which also brings the latest German ZEW survey and US industrial production – the latter the first report since the manufacturing ISM fell below the 50 expansion/contraction mark. 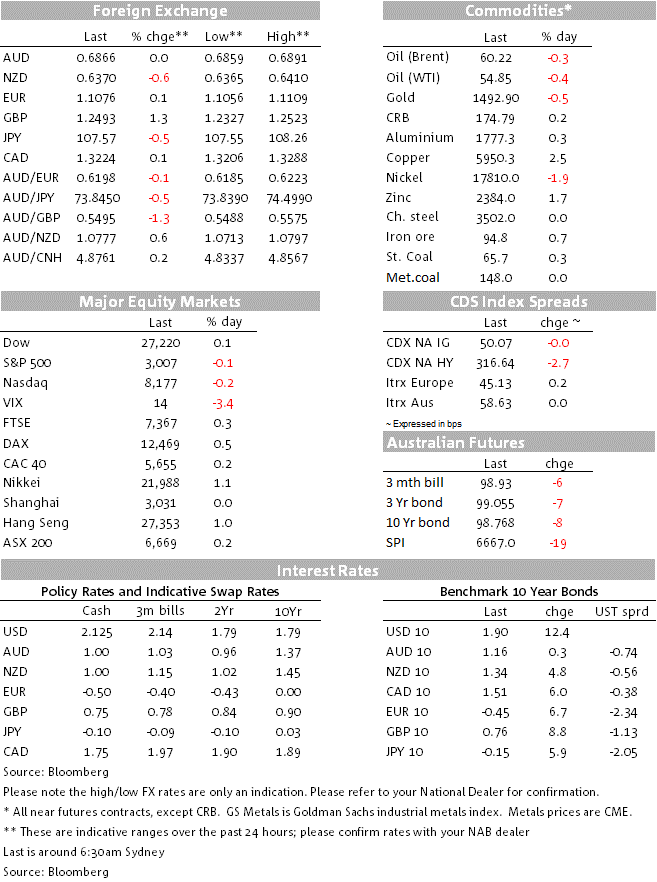