Oil rout sours risk sentiment across the board.

Slippin’ and slidin’, Peepin’ and hidin’, Been told a long time ago

I’ve been told,Baby you’ve been bold,I won’t be your fool no more – Little Richard

Yesterday’s decline in WTI’s May contract has spilled over into near term contracts as the market reassess it optimistic outlook over a potential rebalancing. Volatility in the oil market has weighed on risk sentiment across the board, equities are a sea of red, core bond yields have been well supported and the USD is broadly stronger.

Ahead of the OPEC++ meeting it was clear that the market was oversupplied amid a price war between Russia and Saudi Arabia against a backdrop of collapsing demand globally due to COVID-19 containment measures. Oil demand has been estimated to have declined by 30ml b/d while the OPEC ++ agreement which only gradually begins on May 1 aims at reducing supply by 10 to 12ml b/d. This of course is happening in an environment where oil storage space is running out. So until demand remerges it seems reasonable to suggest prices will remain under downward pressure.

The oil reality check has triggered a reassessment across risk assets with the global equity board a sea of red. The S&P 500 close 3.07% lower while the NASDAQ is -3.48%. Looking at the breakdown of the S&P 500 overnight performance, all sectors have recorded falls for the day, but you may be surprised to learn that yesterday’s underperformers (Energy, Utilities and Real Estate) are the best performers today, down around 1.6% while financials and IT are the big underperformers, down 3.2% and 4.10%. Of course the energy sector has been hammered over recent weeks and remains the big underperformer, but price action overnight does play to the view that the rout in oil prices is triggering a reassessment on the outlook for other sectors.

A theme from the reporting season so far is that most companies are facing sharp revenue declines and not many can give confident guidance given the COVID-19 uncertainty. Meanwhile the US Congress has agreed and eventually signed a fresh spending bill to fight the economic shock from the pandemic, but it has not had a major positive impact on markets.

Risk aversion in the air has increased the demand for core bond with longer dated UST yields leading the decline. The UST curve has bull flattened with the 30y bond declining 5bps over the past 24 hrs to 1.164%. The 10-year rate has fallen to the bottom of the range of the past month, currently down 3bps to 0.57%, after touching a low of 0.54%. Despite the plunge in oil prices, there is no sign of panic in credit markets like we saw last month. Spreads are wider on weaker risk appetite, but not dramatically so.

The USD is again showing its safe haven attributes, performing well not only against G10 but also against EM and Asia. The BBDXY index is up 0.36% to 1258.46 while DXY is up 0.25% to 100.20. The euro is little changed potentially reflecting a little bit of positivity following news that Italy is ready to work with the EU on a new ESM credit line. Italy has previously been reluctant to go down that track, given the conditions involved in accepting funds from the ESM.

NOK has fallen 1.79% reflecting the rout in oil prices with GBP not far behind at -1.2% to 1.2293. There’s a renewed focus on a hard Brexit as UK-EU trade talks restart this week, with the UK govt saying it won’t ask for an extension and if the EU offers one, it will refuse. Meanwhile in the domestic front the has been an increase in criticism over the handling of the COVID-19 crisis.

The NZD fell yesterday to below 0.60 and has extended its losses overnight, going sub 0.5940 but now recovered to 0.5970. The risk-off mood that emerged in the afternoon didn’t help and neither did dovish comments from RBNZ Governor Orr, even with little new information. Orr reiterated the RBNZ view that a negative OCR wouldn’t be ruled out and that the Bank would be thinking about additional stimulus in May, alongside a comment that the Government will also be wanting to issue more debt.  This is in line with our view that the RBNZ will be looking to upscale its QE programme at the May MPS. Governor Orr also said that he was open-minded on direct monetisation of debt. While this is seen as “taboo” by some purists, as we noted in research last week it is effectively equivalent to what is going on now, with the government issuing debt to the market and the RBNZ hoovering it up as part of its QE programme

The AUD now trades at 0.6282, down 0.85% relative to yesterday’s level around this time. The souring in risk sentiment appears to have been the main culprit for the AUD decline, which traded to an overnight low of 0.6254, before recovering a little later in the session. The 0.6250 area will be of focus today, a break below that level will see many technical analysts suggesting further declines could be in the offing for the AUD.

RBA Governor Lowe spoke overnight on the outlook, with no big AUD reaction but pertinent reflections and outlook thinking.  The RBA sees GDP falling 10% in first half and unemployment hitting 10%, although the Governor has also stressed a high degree of uncertainty on the outlook.  Lowe noted one plausible scenario is that the various restrictions from the health crisis begin to be lessened closer to the middle of the year, and are mostly removed by late in the year. “If this is how things play out, the economy could be expected to grow very strongly next year, with GDP growth of perhaps 6–7%, after a fall of around 6%,” he said. At the same time the Governor warned that it is highly probable that the severe shocks we are now experiencing will change the mindsets of some people and businesses. Even after the restrictions are lifted, it is likely that some of the precautionary behaviour will persist. And in the months ahead, we are likely to lose some businesses, despite best efforts, and some of these businesses will not reopen. 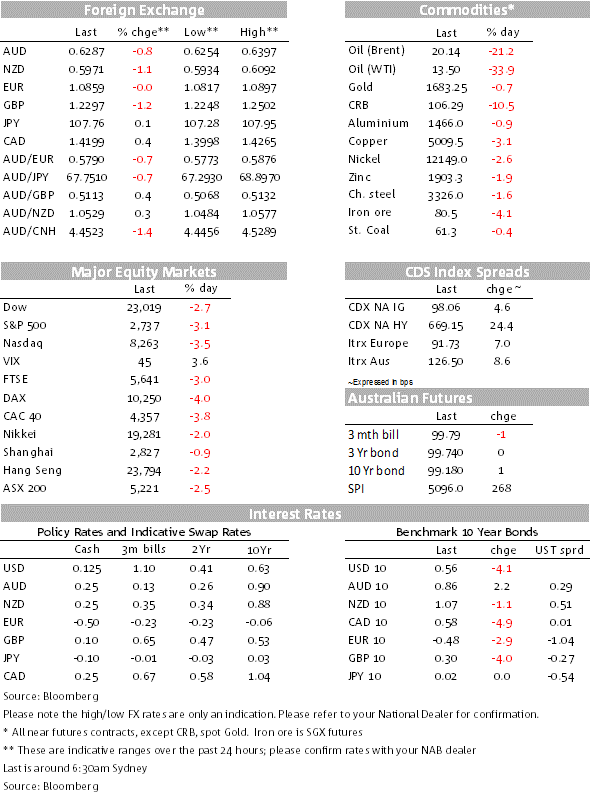