Consumer confidence in the US hit a six month high, yet there’s a continued flight to bonds, pushing Treasury yields to the lowest level since September 2017.

US stocks markets have turned decisively lower in afternoon wall Street trading, the S&P finishing 0.85% down and the Dow a little over 0.9% (the NASDAQ a lesser -0.4%).  US Treasury bonds yields are also lower again with 10s now decisively below 2.3% to a new post-September 2017 low of 2.26%, but the US dollar is recovering from last week’s beat-up with the DXY index up a third of a percent and now back within a 0.4% of its post-May 2017 cycle high recorded last Thursday. Despite which, the AUD has held its ground, currently +0.1% on this time yesterday at 0.6926.

US data has proved to be the proverbial mixed bag. Most of the headlines have been reserved for the further improvement in the Conference Board’s measure of Consumer Confidence, up to 134.1 from 129.6 and which followed a similar jump in the University of Michigan version. This is not quite back to the (October 2018) cycle high of 137.9 but within the survey the ‘jobs plentiful’ index is (the difference between respondents saying jobs are plentiful versus those saying they are hard to get).  It is the evident ongoing strength in the labour market that in turn is keeping consumer confidence buoyant. In this context, consumer discretionary stocks were among the ‘least bad’ sub-components of the fall in the S&P (off only 0.5% vs 0.8% for the broader market and where losses have been led by consumer staples, utilities and healthcare (i.e. defensive sectors).

In contrast to Consumer Confidence, the Dallas Fed Manufacturing Index unexpectedly fell, to -5.3 in May from +2.0 and versus +6.2 expected.  Rising fears among manufacturers of the impact of latest tariff pronouncement from the White House are the key driver behind the fall.  So the present may be rosy – in which respect US consumers have to date been largely shielded from the impact of tariffs outside a few area such as washing machines – but the future much less so if there is no rowing back on tariffs or a moratorium on future ones.

Yesterday our economics team published an update on the US economy where they note that Trump’s decision to lift the tariff rate on $200bn worth of China imports from 10% to 25% would likely take about 0.2% off growth this year (hence we shaved our 2019 GDP growth forecast to 2.3% from 2.5%) but that moving to impose a 25% tariff rate on the $300bn worth of goods not currently tariffed would likely knock at least another 0.3% off GDP (and remember, the latter would be much more heavily felt by consumers, in such area as laptops and smart phone prices).

Bond markets see the US 10 year Treasury yield down another 5bps to 2.26%, a new post-September 2017 low and the 3m/10yr spread further inverting,  now -8.6bp (down over 6bps) to a new cycle low. Tailwinds from the fall in German Bund yields since the EU elections have clearly been a supporting influence on US Treasury prices here, through the aforementioned concern about the tariff impact on US growth and what that likely means for the Fed in H2 2019 is also relevant. Sub-2% growth and sub 2% 10-year Treasuries anyone? (hence the rather lame Shania Twain song title today).

In currencies, the US dollar is stronger against all bar the JPY and AUD, both 0.1% firmer, with losses led by the CAD  ahead of tonight’s Bank of Canada decision and CHF (both -0.38%). The EUR and GBP are down 0.3% and 0.2% respectively and together with CAD the main contributors to the 0.36% rise in the DXY index, back to 97.96 and versus last week’s cycle high of 98.35.  Safe-haven demand for the USD is not yet extinct, or so it would seem, albeit not showing up in Swissie today.

On Brexit, as our resident Morning call Podcast host Phil Dobbie notes in this morning’s edition, a new UK poll – the Lord Ashcroft poll – shows there’s been a slight increase in the ‘leave’ vote, but only a quarter want to leave with no deal – and if there was an election there’s a chance Labour would win, but if the Liberal Democrats and Change party merged, they could win! Yesterday’s NAB’s FX Strategy team lowered their GBP forecasts to take account of the changed political/government landscape with markets having to price for an increased probability of a no-deal Brexit or early General Election – both Sterling negative.

Finally the RBNZ Financial Stability Report just out contains nothing market moving, largely justifying the central bank’s decision to impose higher capital requirements on banks. It notes that there will be no change in LVR restrictions but that this will be reviewed every six months. NZD isn’t moving on this

Nothing due in Australia (where the calendar kicks off in earnest with Capex and Building Approvals both on Thursday).

In NZ the RBNZ Financial Stability Report is just out (see above) but still to come is the ANZ Business Confidence survey where particular interest is in seeing whether the government’s decision not to proceed with a capital gains tax has prompted a bounce.

Offshore tonight it’s EC unemployment, ECBs Rehn speaking (a potential successor to Draghi), the Richmond Fed Manufacturing Index and the latest Bank of Canada rates decision (where we expect to hear they are comfortably on hold with the prevailing 1.75% policy rate). 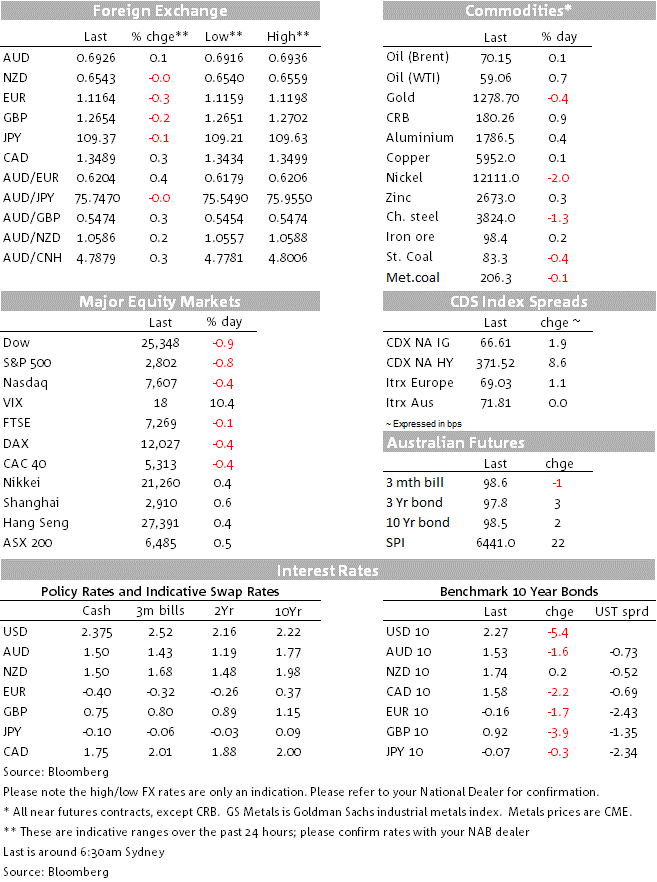