All eyes and ears will be on Philip Lowe’s speech today, following the very dovish outlook from the RBA yesterday.

This is what it sounds when doves cry – Prince

Markets returning to normal, whatever that is

European and US equity markets appear to be heading back to some sort of normality  as the retail driven spike in heavily shorted stocks continues to reverse course. Gamestop is down nearly 50% after its 30% plunge yesterday, while AMC is down almost 40%. The silver market – which purportedly was in the sights of the Reddit brigade – shows prices reversing yesterday’s surge (down some 8%) no doubt influenced by the CME raising margins for traders by 18%. On the one hand one could argue that fundamentals are back driving price moves on the likes of Gamestop, but the Redditt day traders motivation was not driven by fundamentals, so it remains to be seen if retail investors can still instigate new rounds of market volatility.

The Stoxx Europe 600 Index ended the day 1.3% higher with Travel and Leisure sector leading the gains following UK PM Johnson optimistic remarks that people will be able to have summer holidays this year. US equities also look set to record a second consecutive day of gains with the S&P 500 up 1.76% as I type while the NASDAQ is 1.84%. After almost two days of trading, US equities have almost reversed the losses incurred last week. The VIX Index is now trading at 25.4, after spiking to 37.2 last week.

Yesterday’s highly publicised meeting with President Biden and 10 Republican Senators there were no concrete outcomes . On the positive side both parties agreed to continue talking, but in a statement President Biden stressed the urgency to act “boldly and urgently” and noting that there were many areas the Republican senators’ proposal did not address. The President is hopeful that the Rescue Plan can pass with bipartisan support, but then added “ a reconciliation package is a path to achieve that end.”. Overnight  Congressional Democrats have continued to prepare accordingly, House Speaker  Pelosi and Senate Majority Leader Schumer are set to introduced a budget resolution on Monday, kick starting the  “budget reconciliation” process that would allow large components of the President’s  virus-relief plan to pass the Senate with only 51 votes.

On the economic front

EZ Q4 GDP came in 2/10 stronger than the consensus estimate of -0.9% at -0.7%q/q, thanks to better performances by France and Spain, with Germany in line. That followed a revised Q3 (rebound) of +12.4% and took annual growth to -5.3%, which betters the ECB’s December forecast of -7.3% for the year. The takeaway though is Q1 will be dragged by the virus and ongoing restrictions, meaning a double dip is likely, before recovery in Q2.

Moving onto currencies, the USD has had a good night, performing across the board and higher in index terms. Both BBDXY (+0.03%) and DXY (0.23%) are higher relative to levels 24 hours ago with euro weakness one of the main culprits while the AUD is the big underperformer within the G10 group.

The AUD now trades at 0.7590 (-0.45%), after trading to an overnight low of 0.7564, following yesterday’s RBA’s dovish surprise and stronger USD performance overnight . Yesterday the RBA unexpectedly announced an extension of its government bond-buying program well ahead of the expiry of the current one in mid-April, for another $100bn and to operate at the current weekly run rate of $5bn. This despite Governor Lowe’s post-meeting Statement saying the Australia’s economic recovery “is well under way and has been stronger than was earlier expected” and flagging significant upgrades to its forecasts. These now have, under its central scenario, unemployment to be around 6% at the end of this year and 5.5% at the end of 2022, and GDP up 3.5% over both 2021 and 2022. The RBA continues to set a high bar for interest-rate increases, saying it will need to see “materially higher wages growth” requiring “significant gains in employment and a return to a tight labour” market and that “The Board does not expect these conditions to be met until 2024 at the earliest.”

On the AUD and the RBA , the recent behaviour of the exchange rate looks to have been at least a partial motivation for the Bank’s decisions to extend its QE programme, where the Statement noted albeit factually, “The exchange rate has appreciated and is in the upper end of the range of recent years”. Further QE from the RBA is certainly a headwind for the AUD, but given everybody else is also doing it, we still think the AUD fortunes will ultimately be driven by the outlook for global growth and commodities along with real rates differentials. Assuming an effective vaccine rollout, this should be good news for global growth and the AUD.

The NZD has largely been on the sidelines, jobbing around driven by movements in the USD. This saw it make a run towards, but not meeting, the 0.72 level overnight, before slipping back down and now trades at 0.7152. The GDT dairy auction was yet another positive one, with prices up 1.8% and making it more likely by the day that Fonterra’s payout is closer to the top of its range.

The euro has extended its decline (-0.32) and now looks on course to test a move below 1.20 (currently at 1.2018). The better then expected Q4 GDP print didn’t elict much of a reaction, with the market now more focus on the likely weakness in Q1. Vaccone roll out remains a concern, speaking after crisis talks with pharmaceutical executives, German Chancellor Angela Merkel promised all Germans a first shot of Covid-19 vaccine by the end of September, as long as drugmakers stick to their delivery commitments. The relative growth dynamics between Europe ( weak)  and the US ( better) are favouring the USD at the moment, but it remains to be seen if this can be a longer lasting theme.

Core global bond yields edged up a little higher overnight, core 10y tenors  in Europe rose around 3bps while 10y UST yields  are up around 2bps to 1.0997%, after trading to an overnight high of 1.1168%. Last week the 10y note traded to a low of 0.9941%. AU bond futures have lagged the move up in yields overnight and are essentially unchanged (98.840 in price terms). 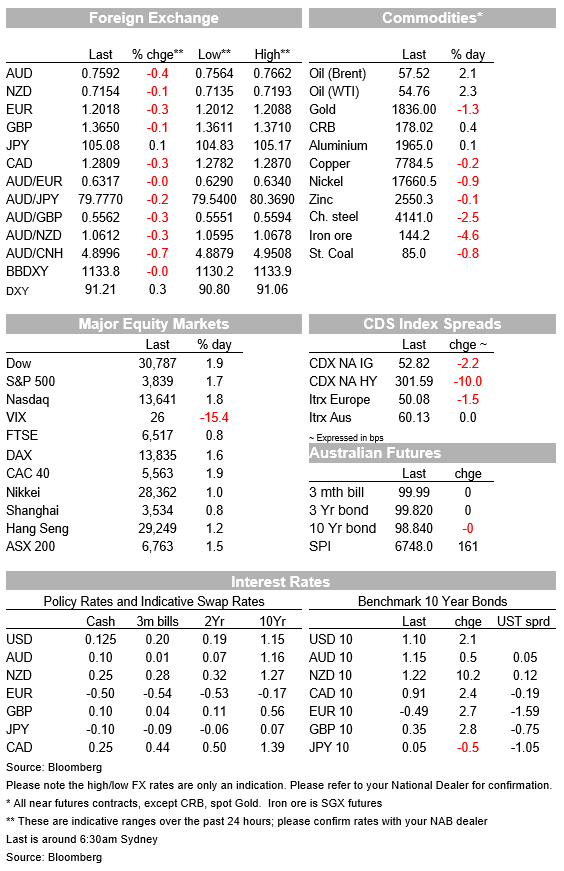