The pound has taken a hit on the increased uncertainty on where Brexit is heading.

No Brexit vote Tuesday; May heading back to Brussels

Coming in today to find screens of news covering the continued Brexit uncertainty as the time approached for a Parliamentary vote late Tuesday UK time (early tomorrow our time).  The market and UK political commentators have been widely touting the high likelihood the vote would not get passed and that reality has now been officially grasped by May.  May has relented and postponed the vote and is headed back to Brussels.  From all reports, it’s been a very hectic Brexit day replete with a myriad of political and Brexit possibilities, May still under real pressure.

May has now admitted what everyone thought, that the bill was likely to be defeated by a “significant margin”, mainly due to MPs’ concerns about the Northern Irish backstop.  She will meet EU leaders in Brussels on Thursday and hopes to extract some more concessions on the backstop.  A European Commission spokeswoman said the EU was not willing to renegotiate the agreement, although Bloomberg reported that EU was prepared to publish a declaration over the backstop, clarifying the EU’s position.  Such a declaration seems unlikely to convince enough MPs to vote for the deal however, given it would not be legally binding.  May did not set a date for when the new vote might take place.  The market is concerned that the postponement uses up valuable time before the 29th March exit date, and the risk of a no-deal scenario is growing.

As my BNZ colleague Nick Smyth has reported this morning, the political situation in the UK is fluid and there remain a large number of permutations that could take place from here.  Labour MP Chris Leslie said the party could table a vote of no confidence tomorrow, and while May would likely survive this, the threat of new elections and a Corbyn-led Labour government remains.  A second referendum is also a growing possibility, despite May’s insistence that this was off the table.  Overnight, the ECJ ruled that the UK could unilaterally withdraw its Article 50 request to leave the EU, which has given hope to Remain supporters that Brexit could yet be reversed.  A second referendum appears to be one of the few ways to break the impasse in the divided UK parliament.

Currencies: DXY higher, thanks to Sterling and more

Sterling has, by a stretch, been the worst performer on the day, Cable reaching new lows for the year, EUR/GBP within sight of the same on the topside.  Sterling traded to within sight of 1.25 and is only just above that level now, at 1.2555.  The fact that given all the uncertainty, that Cable is down a modest 1½% since 5pm yesterday (in my mind modest given the political situation) is a reminder to this writer of how much bad news is already priced into Sterling.

Thanks to the decline in Sterling, and a bit more, the USD has made some ground overnight.  First, it’s no surprise that it’s been a risk-off night. The Euro has also been heavy overnight, as have the commodity currencies, especially the oil-centric commodity currencies (CAD and NOK) underperforming on renewed weakness in oil only a day on from the OPEC supply cut deal.

European stocks were in the red though interestingly, among the European main boards, the FTSE was one of the least-bad performers, down 0.83% against the Eurostoxx index that was down 1.87% with European 600 banks index down 2.66%.  US equities were heavy in the first part of the session, but have recovered and have made it back in and out of positive territory in the last hour of trade, lead higher by the Nasdaq.  Even Apple share are now higher on the day after news that a Chinese court had ordered the company to stop selling older iPhone models.

Oil is again back in the spotlight, both WTI and Brent down the best part of 3% overnight (both down around $1.50-60/bbl), possibly as traders pare positions ahead of news on the implementation of actual rather than promised cuts.  Wire stories are reporting news that oil exploration companies are still planning to boost spending in 2019.  We will be paying close attention to US shale activity in coming months, to rig count numbers, production, inventories, as well as takeaway capacity.  While US inventories are not back to 2015-early 2017 highs on the back of the first phase of the US shale production boost, they have been increasing on net in recent months.

Base metals were down on the LME, the LMEX index down 1.00%, copper down 0.91% to $6,089/tonne.  Gold is down marginally, by 0.42%, more than accounted for by the uplift in the DXY.  The bulk commodities are little changed overall, though Chinese rebar futures fell further yesterday.

Economic news has been rather limited and not absolutely top tier in terms of market sensitivity.  What there has been has been on the soft side for the UK and Europe, but better for the US.  UK industrial production in October dipped 0.6% against expectations of a 0.1% rise, while the trade deficit came in at £-3.3bn in October, much wider than the £-1.3bn consensus.  Construction output dipped a smaller than expected 0.2% against expectations of a 0.5% fall.  In Europe, the lesser-watched Sentix Investor Confidence index for December took a beating, down from +8.8 to -0.3, back to European debt crisis levels amid trade tensions, Brexit, Italy budget jitters and unrest in France and Belgium.

The US released its Job Openings report for October (it lags payrolls for a month), again reflecting a still very strong labour market.  Openings came in at 7.079m, up from a revised 6.96m.  Even if not quite to the 7.1m consensus, it was still the second highest on record, with openings still ahead of aggregate employment by over 1m.  The quite rate, regarded as a measure of labour market health as people switch jobs, was down marginally from 2.4% to 2.3%, but still very high.  Among job openings, manufacturers reported increases.

It’s been a tale of two halves with bonds rallying in Europe, as initially they did in the US, before some equity rebound saw Treasury yields trading marginally higher for the day, 10s little changed as we go to print.

Finally, despite not using a Queen song today (I was tempted), if you haven’t caught Bohemian Rhapsody yet, take a look. 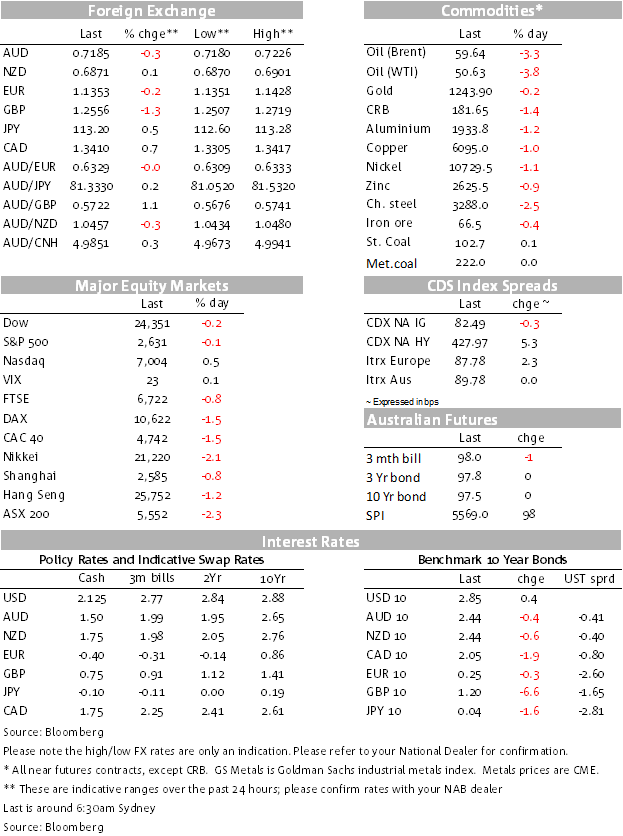