Oil has been the big mover overnight ahead of the OPEC summit.

Having thought last week that most markets had given up on playing trade headline ping pong, price action over the last 24 hours shows this patently not to be the case.

The news report that has brought about a recovery in global equity markets and driven global benchmark bond yields back higher came from Bloomberg about 8:30pm AEDT and read: “The U.S. and China are moving closer to agreeing on the amount of tariffs that would be rolled back in a phase-one trade deal despite tensions over Hong Kong and Xinjiang, people familiar with the talks said. The people, who asked not to be identified, said that U.S. President Donald Trump’s comments Tuesday downplaying the urgency of a deal shouldn’t be understood to mean the talks were stalling, as he was speaking off the cuff”.

So another day another trade headline that contradicts the prior one, though the significance – perhaps – of this latest one is that to date it has only been the Chinese side who have been talking about a tariff roll-back as likely to form part of any Phase 1 trade agreement.  Here the US side is acknowledging that this is on the table.  The report goes on to suggest that a Phase 1 agreement can still be agreed prior to the December 15 deadline when, as things stand, the US is due to impose 15% tariffs on a further $160bn or so of Chinese imports – most of them consumer goods.

US 10-year bond yields, which had dropped from about 1.84% to 1.70% on Tuesday, partly on President Trump suggesting he was inclined to wait until after the November 2020 elections to strike a deal with China – have recovered to the 1.77% area overnight and currently trade near the highs of the day. 2-year yields, which fell from above 1.60% to below 1.52% yesterday, are back up to 1.58%, so mild bear steepening of the curve is the order of the day.

Somewhat limiting – though not preventing – a back-up in yields was the weaker than expected ADP employment report 67k – and excluding any negative impact from the GM strike since GM doesn’t use ADP for their payroll – and more significantly the ISM non-manufacturing report. This came in at a below-expectations 53.9, down from 54.7 in October and 54.5 consensus. This is still a quite healthy level in absolute terms and both the new orders and employment sub-indices rose last month, orders to 57.1 from 55.6 and employment to 55.5 from 53.7.

Earlier in the evening, final Eurozone PMI numbers for the service sector showed France revised down but Germany revised up relative to the ‘flash’ estimate, and together with the final manufacturing figures earlier in the week, meant that the pan-Eurozone composite PMI is now put at 50.6 up from the 50.3 flash reading and unchanged from October. Stabilisation rather than outright improvement remains the name of the game as far as Eurozone PMI data in general is concerned.

US stock markets are coming into the last ‘hour of power’ with gains of between 0.7% and 0.8%, so almost exactly where they were at Tuesday’s close. Leading the move high sector-wise has been energy, in turn driven by a renewed surge in oil prices with Brent and WTI crudes both up by ±$4. This is after the US Energy Information Administration (EIA) reported the first draw in crude stocks in six weeks and in front of the two day OPEC+ meeting and speculation these producers will at least agree to extend output cuts.

FX markets have been subject to somewhat more idiosyncratic price action. The two biggest gainers of the past 24 hours have been CAD and GBP.  CAD on the oil price surge and also after the Bank of Canada stuck a somewhat less dovish tone than out of its late October meeting, noting that domestic activity appeared to be resilient and that “there is nascent evidence that the global economy is stabilizing”.

AUD/USD meanwhile has recovered all of the losses it suffered on Wednesday from the combination of US-China trade deal pessimism, a weaker Renminbi and then the slight downside surprise on Q3 GDP. The latter at 0.4% versus a revised 0.6% in Q2 was only as strong as it was largely because of the strength of public spending (0.3% and two-thirds of that consumption with NDIS roll-out a big factor here). Private sector weakness was highlighted by a mere 0.1% quarterly rise in consumption and 2% fall in business investment. Net exports were also a positive, contributing  0.2%, though being at the extraction end of the resources boom, this is not labour intensive activity.

Yesterday NAB added another 0.25% cut to its RBA forecasts, now predicting cuts in both February and June next year, with a high chance of a shift into unconventional policy mode thereafter.

GBP is the other star performer overnight, with latest ‘poll of polls’ remaining consistent with an outright Conservative majority out of the December 12 General Election, President Trump’s visit to the UK seemingly doing nothing to harm Tory election prospects (he expressed no interest in having anything to do with the NHS) and the UK services PMI printing a better than expected 49.3 from 48.6 last time.

RBNZ Bank Capital Policy announcement (10:00 AEDT) where the key headline that markets will latch onto will the extent, if any, to which he original proposals of raising the minimum Tier 1 capital requirements from 8.5% to 16% over five years is being softened. Market impact will likely be most immediately felt in Australian bank shares, which have been quite badly beaten up in recent days and weeks.

AU October trade:  After last month’s trade balance surprised on the upside, NAB expects the surplus to shrink to $6.5bn in October (market: $6.5bn). We expect a fall in rural and non-monetary gold exports and broadly flat commodity exports. USD/CAD is currently -0.8% on the day and AUD/CAD back down to .9040 having risen from a low of around 0.8840 to a high of almost 0.9120 in the last two months.

Offshore this evening, German factory orders looks  like the pick of a rather meagre crop. 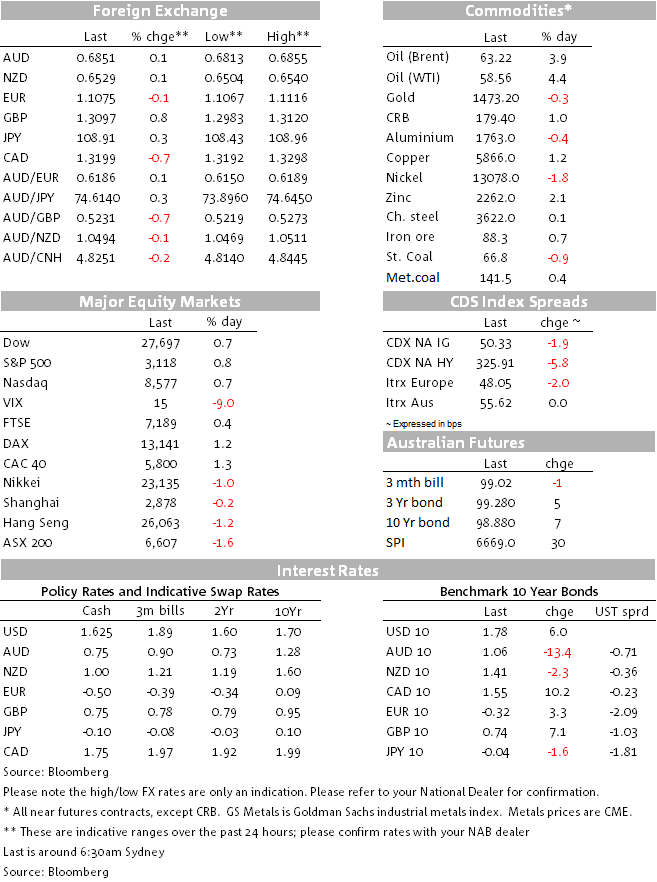