The Fed’s Governor Jerome Powell took a very sombre tone about the response to the COVID-19 crisis.

US stock indices closing with losses of plus or minus 2%, the same as yesterday (S&P 500 -1.75%, bringing the two-day loss to -3.75%). The USD is about 0.3% stronger in index terms and longer dated sovereign bond yields are lower.

After Tuesday’s warnings from top US health official Anthony Fauci on the economic and well as public health risks of re-opening the economy willy-nilly, a combination of downbeat comments from Fed Chair Jay Powell together with a couple of hedge fund luminaries weighing in with bearish views on US equities, have added to the malaise.  David Tepper called it the most over-valued market ever outside the bubble of 1999; this after yesterday’s comments from Stan Druckenmiller who said that the risk-reward for stocks was the worst he’s seen in his career (and, admittedly perma-bear, Albert Edwards, had similar things to say earlier in the week).

The US economic outlook is “highly uncertain” and downside risks are significant, that more fiscal support could be “costly, but worth it” (now isn’t the time to prioritize debt reduction, he said) and that the virus raises concern of long term economic harm (citing business bankruptcies and long term unemployment).

Powell didn’t slam the door completely on their potential future use, but said that “The evidence on negative rates is mixed,” and that “for now it’s not something we’re considering”. He expanded on this, saying that “all FOMC members” don’t see it as an attractive tool, that the current tool kit works and that the evidence on negative rates is ambiguous, with a particular concern over its impact on bank profitability and hence the ability to lend.

No such concerns in NZ it seems

Yesterday the RBNZ, alongside the decision to raise its QE bond buying ceiling from $33bn to $60bn, left open the possibility of a negative OCR later next year (while re-iterating it expects to keep it at 0.25% through March 2021). Deputy Governor Geoff Bascand in the post-MPS press conference told banks to be technically prepared for negative rates by the end of 2020, a red rag to the FX market which quickly extended the immediate post RBNZ-announcement NZD losses.

NZD/USD comes in to the new York close down 1.4% on the day with no other G10 currency off by more than 0.4% (SEK). RBNZ Governor Orr has just been speaking, re-iterating that negative rates could be used if needed and saying that the drop in the NZD shows that monetary policy is effective (so no prizes for guessing where his preferences lie on the currency).

US rates markets saw a minor back-up at the front end of the curve (2-year treasuries +0.2bp and the money market pushing its flirtation with a negative Fed Funds rate further into 2021) while the risk-negative backdrop has supported the longer end where 10s are -2bps to 0.65%. $22bn worth of 30-year Treasuries were taken down without difficulty. Earlier, European government bond yields were lower everywhere, led by falls of 8-9bps in Euro-peripheral debt (10-year Italy -9bps, Portugal -8bps) with German Bunds -5bps and UK gilts -4bps.

Today’s April labour data should be grim.  NAB expects job losses to total 650k (mkt: -575k), with unemployment almost doubling to 9% (mkt: 8.2%, previous 5.2%) on its way to a forecast peak of about 12% in June. A (favourable downside) risk to our unemployment forecast is that more people have dropped out of the workforce than we expect.

Offshore this evening, the ECB’s Economic Bulletin will be of interest, and in the US latest weekly jobless claims (consensus +2.5 million). 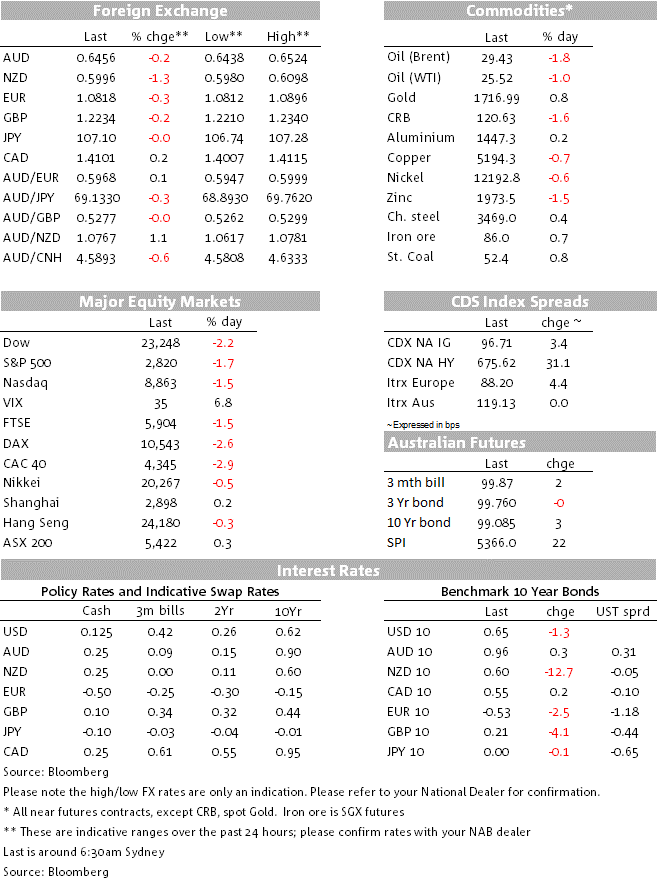