Markets Today: Prepare for a bumpy start to November

After the markets finished with a strong equities and bond sell-off on Friday, expect a busy week, with the RBA, the Fed and Bank of England all meeting, with the difficult job of determining how to see the economy through rising infection numbers.

US equity market extended their rout on Friday with tech shares leading the decline amid disappointing reports by US tech giants. US Treasuries again failed to show safe-haven qualities extending their sell off with the 10y Note closing the week at 0.87%. FX markets had a quiet month end, little changed on the day, NOK and AUD were the underperformers in October. COVID-19 remains a major concern, US record a new record on Friday and England joins other European countries in lockdown. Official PMIs suggest  China’s recovery remains robust.

US equity markets remain jittery with Thursday’s rebound more than reversed on Friday. The tech heavy NASDAQ index closed the day down 2.45% amid disappointing results  from many US tech giants. Apple’s iPhone sales were more than 20% lower than a year ago and refrain from providing any guidance for Q4 ( Apple shares fell 6%) Twitter user growth both missed estimates (-21%). Amazon (-5%) beat earnings and revenue forecasts, but investors instead focused on the firm’s rising cost base, due in large part to COVID-related expenses.  Facebook (-6%)  also experienced big falls in their share prices, with Alphabet (Google’s parent) bucking the trend, rising 4%, after reporting a rebound in advertising.

The NASDAQ fell 2.45% on Friday and the S&P 500 declined by 1.21%. Friday’s decline cemented a second week of decline for the S&P 500, down 5.6%, its worst weekly return since the pandemic induced collapse in March. The S&P 500 fell 2.77% in October, not a bad outcome when one looks over to Europe with the DAX down  9.44% for the month while the Eurostoxx 50 fell by 7.37%.  China’s Shanghai Composite was little changed in October while Australia and New Zealand equities outperformed.

The turn in sentiment wasn’t just about disappointing US tech giants results. COVID-19 is becoming a bigger concerns amid accelerating rates of infection in Europe and the US. After recording a new record of daily infections on Thursday, the US recorded a new record on Friday, adding 97k cases on the day and also recording a new world record for infections for one country in seven consecutive days ( 548k). The US added another 78k on Saturday, but the decline in numbers may just reflect a decline in testing over the weekend. The FT noted that Midwestern states, many key battle grounds in the US election, have led the current wave of infections, hospitalisations and deaths across the country.

Meanwhile over the weekend

UK prime minister Boris Johnson ordered England into a four-week partial lockdown (starting Thursday) as a surge in coronavirus cases is threatening to overwhelm the country’s health care system . All restaurants, bars and non-essential retailers will close for at least a month although, unlike the first lockdown, schools and universities will remain open.  The UK’s wage subsidy scheme will be extended, with the government covering as much as 80% of the wages of furloughed workers, and affected households will be eligible for six-month mortgage holidays.  The Bank of England is expected to increase its bond buying when it meets later this week and the new lockdown may see the market increase the probability that the BoE cuts its cash rate to negative next year.  Elsewhere in Europe, Belgium announced that all non-essential stores would need to be shut and mandated working from home, if possible, while Austria and Portugal announced new restrictions.  The market brushed off stronger-than-expected European GDP on Friday, which showed growth rebounding almost 13% in Q3, with renewed social distancing restrictions rendering the data largely out-of-date.

Betting markets have the odds of a Biden win at around 66% while prediction site fivethirtyeight ascribes a 90% chance of a Biden victory. Pre-election voting numbers are running at unprecedented levels, with the state of Texas having already received more ballots than its entire vote count in the last election. A WSJ survey notes Biden leads Trump, 52% to 42%, in the poll’s final reading of voter opinion before Election Day, essentially unchanged from the previous survey in mid-October. However, the survey also notes that Mr. Biden’s advantage in swing states is within the poll’s margin of error, suggesting Trump is still in the race.

After trading to a low of 0.7493% half way through the week, 10y UST ended the week at 0.87%, up 7bps relative to Sydney’s levels on Friday. In the process the benchmark bond closed above its 200day moving average of 0.83.3% for the first time since December 2018. 10y and 30y UST yields have climbed 20bps in October. The recent move up in UST yields points to a growing investor conviction in a Democrat sweep at the election, with Treasury yields moving sharply higher and the curve steeper, amid expectations of a big fiscal stimulus under a Biden Presidency.  Focus in this regard appears to be on the big US debt required in order to fund the expected stimulus. Notably US Treasuries appear to be losing their safe haven appeal, underperforming when US equity markets sell-off. The recent swift move up in yield is likely to be a big point of discussion at the FOMC meeting later this week.

Moves on Friday were certainly subdued when compared to equities and bonds. Month end flows came and went without much fanfare. The Bloomberg DXY was flat on the day, consolidating its strong (+0.9%) gains from earlier in the week.  The USD was supported last week by the equity market sell-off (the USD tends to perform well during periods of risk aversion) but, perhaps more importantly, the weakness in the EUR (as European governments implemented national lockdowns and the ECB signalled further policy easing in December).  ECB Governing Council member Holzmann told Bloomberg on Friday that the central bank could look at using “new instruments” to ease policy in December.

The new week is likely to provide a lot of twist and turns for currency investors. Last week the USD was well supported amid increasing risk aversion, but when looking at the BBDXY index, the greenback still underperform in October and it was marginally higher when looking at the euro heavy DXY index. NOK weighed down by the big underperformance in oil in October was the big underperformer in the month while RBA easing expectations weighed on the AUD. The AUD was little changed on Friday, ending October at 0.7028 ( same level currently), but down 1.87% in October.

As my BNZ colleague noted in his daily today, The US election is expected to be critical to the path of the USD in the coming months , with the prevailing consensus that a Democrat clean sweep will trigger a renewed downturn in the USD.  First, the Democrat’s massive fiscal stimulus will likely add to pre-existing concerns about the US “twin deficits”.  Second, the fiscal stimulus should boost inflation expectations and, provided the Fed scales up its QE programme to counteract an unhelpful increase in bond yields, this should keep US real interest rates at depressed levels.  Third, a decisive margin of victory for Biden – more likely in a clean sweep scenario – reduces the risk that Trump contests the result, which would be positive for risk assets and negative for the USD, all else equal.  In contrast, a messy, contested result and/or a divided government are more likely to lead to renewed risk aversion and an appreciation in the USD.

Oil prices remained under pressure on Friday down just over 1% with traders reassessing demand outlook as European countries begin their lockdowns. Aluminium and iron ore outperformed on Friday, but for the month metals were the clear winners while oil was the big underperformer.

There was plenty of economic data out on Friday night, but without any major impact on markets

Of note, core PCE inflation, the Fed’s preferred inflation measure, undershot expectations (1.5% on a year ago vs. 1.7% expected).  The official Chinese PMIs released over the weekend were close to market expectations and remain at strong levels, with China’s economy benefiting from having largely contained COVID-19.

Amid muted demand from borrowers and banks, on Friday the Fed announced new measures to encourage an increase in lending. Friday’s changes reduced, for the third time, the minimum loan amount under the program – to $100,000, from $250,000. The loan amounts had earlier been lowered from $1 million to $500,000 and then from $500,000 to $250,000. The changes also revamped the fees banks can charge borrowers to encourage greater production of smaller loans. 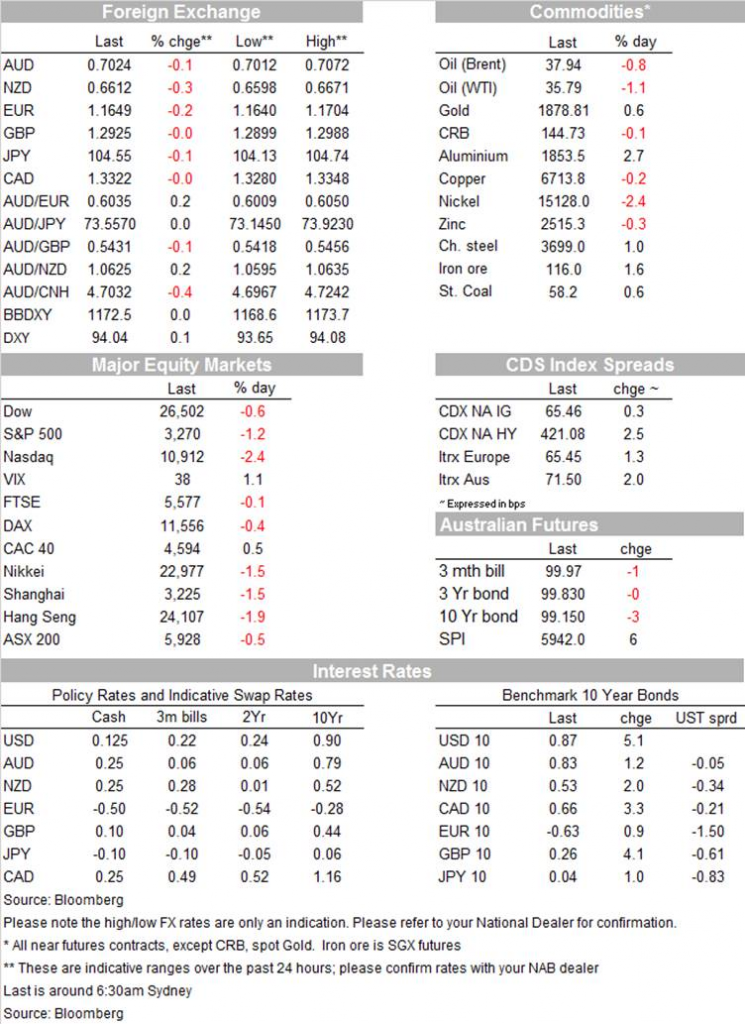