Markets Today: RBA buys up ahead of today’s meeting

The RBA might have left itself with very little to say today, having upped their bond buying in response to the sharp rise in yields last week.

“Yellow diamonds in the light; Now we’re standing side by side; As your shadow crosses mine; What it takes to come alive”, Rihanna 2011

“We Found Love” was the 2011 hit single by Barbadian songstress Rihanna and it seems equity markets found that point last night given the consolidation in yields over the past couple of days. The S&P500 is currently up 2.6%, with strong gains also being seen in Europe (Euro Stoxx50 +1.9%) and Asia (Nikkei 2.4%, CSI 300 +1.5%). Yields have consolidated recent moves with the US 10yr +4.5bps to 1.45%, though notably inflation pricing remains elevated with the 10yr implied inflation breakeven at 2.17%. Equity strategists are becoming comfortable with the current level of yields with Goldman’s out saying rates won’t pose a significant danger to equities until the 10yr yield hits 2.1%. Data was on the stronger side with the US ISM Manufacturing Index better than expected (60.8 v. 58.9 expected), while the prices paid index rose to 86.0 and is at its highest level since 2008. FX moves were mixed with commodity currencies outperforming, notably the AUD which is up 0.9% to 0.7770 and USD/NOK -1.2% to 8.5623. The EUR meanwhile underperformed with the overall USD DXY up 0.2%. EM FX has also seen some huge moves given the consolidation in dollar yields with TRY, MXN, ZAR all rallying 0.7-2.0%.

Central banks continue to take diverging views on the signals sent by the recent rise in yields. The US Fed is taking it as a positive signal with the Fed’s Barkin stating overnight stating: “In fact, I would be disappointed if we didn’t see yields, you know, rise as the outlook improves” (see WSJ interview for details) and that “ If the driver is — as it seems to be — news about vaccines, or news about health of the economy, or news about fiscal stimulus, then I think it’s a natural reaction.” In contrast the ECB continues to push back with Bank of France Governor stating the ECB “there are other elements in this tightening of financing conditions, including excessive spillovers and tensions on the term premia. In so much as this tightening is unwarranted, we can and must react against it, starting with an active flexibility of our PEPP purchases” (see BBG article for details ). That diverging outlook is also spilling over the FX and rates where the EUR fell 0.3% overnight and German Bunds rallied (10yr Bund yield -7.4bps to -0.33%) alongside Italian BTPs (10yr BTP yield -10.3bps to 0.6560%). It is unclear whether the ECB has stepped up QE purchases in net terms with gross purchases under its PEPP program actually slowing to 12bn from 17.2bn the prior week.

The RBA by its actions is also in the European camp, having pushed back on market moves with  $4bn in QE purchases yesterday, which is double the normal $2bn amount. Note in the table below the yield moves in ACGBs occurred mostly prior to the RBA purchases given bond futures on Friday night implied a 20bps move in yields, so the RBA’s QE actions only had a 3-4bps impact overall. As for today’s RBA meeting, focus will be on any guidance on the QE program, as well as to the 3yr YCC target and whether the RBA has developed its thinking on whether to extent its target to the November 2024 bond from the April 2024 bond. My colleague Skye Masters notes the RBA now owns 60% of the April 2024 bond and 39% of the April 2023 bond. Given the run of better than expected data in Australia and little push back in the yield moves in the US, we expect the market to continue to test the RBA’s YCC target this year, as well as putting pressure on longer end yields.

As for data it was sparse, but very strong. The US ISM Manufacturing rose to 60.8 against 58.9 expected and 58.7 previously. The prices paid index rose to its highest level since 2008 to 86.0 from 80.0. Other sub-indexes were also strong with gains across new orders (+3.7 to 64.8), production (+2.5 to 63.5) and employment (+1.8 to 54.4). The index was also boosted by an increase in supplier delivery times (+38 to 72.0), a sign of supply chain bottle necks and potentially a source of higher temporary inflationary pressure. The Markit PMIs were also revised higher in Europe and the US (Eurozone Manufacturing PMI 57.9 v 57.7 initially), pointing to resilience in Q1 growth despite pandemic restrictions. In contrast the German CPI was as expected at 1.6% y.y.

Closer to home Australian Home Loan Approvals shot the lights out yesterday, surging 10. 5% m/m in January to be 44.3% higher y/y and 49.3% higher than pre-pandemic February 2020 levels. Dwelling prices also rose strongly in February, up  2.1% m/m = to be 4.0% higher y/y and 3.0% above pre-pandemic April 2020 levels. The sharp pick-up in housing activity comes on the back of the low rate environment and RBA Governor Lowe’s “best guess” guidance of not seeing the conditions for a lift in rates until at least 2024. Despite the pick-up in activity, we do not think the RBA will tighten macro-prudential policy given investor housing credit remains subdued, and little evidence of any deterioration in lending standards.

All focus on the RBA and the wording in the post-Meeting Statement given the RBA’s push back on the move in yields. Elsewhere it is very quiet with only Eurozone CPI the only top-tier data. Details below: 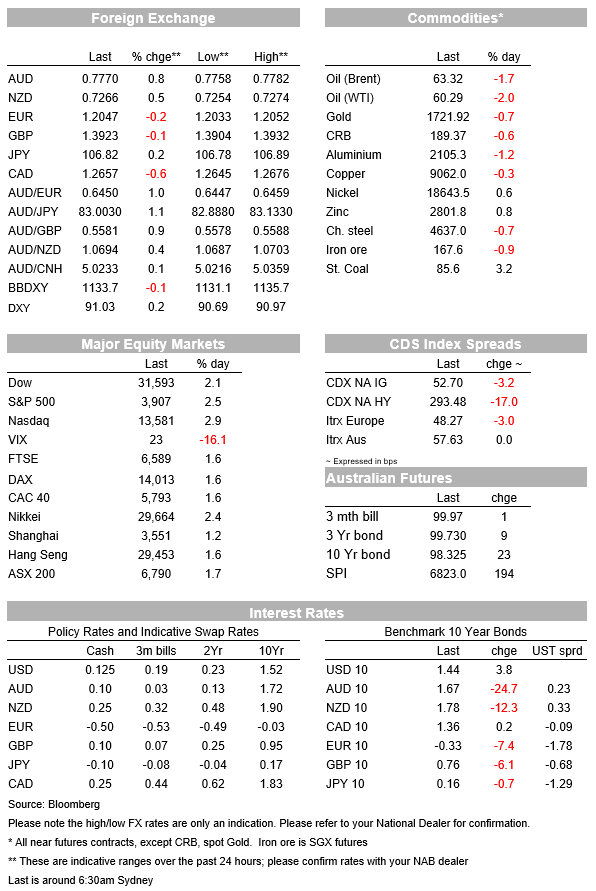