Overview: Pound the alarm (or not)

Risk aversion rises as fears over the Wuhan Coronavirus grows, though has ebbed slightly over the past hour as the World Health Organisation declined to declare a global health emergency. Global yields are lower with US 10yr -3.3bps to 1.74%, though equities are more steady (S&P500 +0.0) after having fallen sharply in Asia and Europe (Shanghai -2.8%, DAX -0.9%). FX moves have shown typical mild risk aversion moves with USD/JPY -0.3% to 109.50, while the USD (DXY) is higher +0.2% to 97.695. The EUR while initially rising after the ECB meeting on slightly more positive comments, fell back to be -0.3% to 1.1056. Commodities are lower on global growth fears stemming from the virus with Brent oil -1.7% to $62.16, along with Copper (-2.0%). Lower commodity prices coupled with risk aversion saw the AUD reverse yesterday’s gains with the AUD unchanged over 24 hours to be 0.6841. Pricing for a RBA rate cut though has moved lower with now around a 25% chance, well down from 60% prior to the jobs figures.

First to the Wuhan Coronavirus

The death-toll currently stands at 18 people, with 647 reported cases (implying a mortality rate of 2.8%). The majority of cases are still in China with 628, comprising 97% of all reported infections. The later fact has meant the World Health Organisation has not declared an international emergency, stating the outbreak is not yet a public health emergency beyond China, though the panel was split on the matter. Markets are fearful the virus could spread, and even if it doesn’t the impact on China could be large with around 26m people in cities or near urban areas that are either on lockdown or have limited travel (Wuhan 11m, Xianning City 2.7m, Huanggang 7.5m, Ezhou 1.0m, Chibi 0.5m, Xiantao 1.2m, Qianjiang 1m, Zhijiang 0.5m and Lichuan 0.7m). Some Lunar New Year Festivities have also been cancelled in Beijing and Macau.

A taste for the size of the possible impact on China is that during SARs in 2002-2003, Chinese Retail Sales dipped to 4.3% y/y after having averaged around 9% previously, while Quarterly GDP growth slipped to 0.9% q/q from the +2% q/q previously (see Chart below). It is too early to tell the impact, but it is very likely there will be an impact on Chinese growth in Q1, especially given the outbreak coincides with the Lunar New Year holiday.

The ECB meeting overnight came and went without too much fanfare. The ECB kept the policy rate unchanged as expected, though the language was marginally more optimistic with President Lagarde noting: “The risks surrounding the euro area growth outlook, related to geopolitical factors, rising protectionism and vulnerabilities in emerging markets, remain tilted to the downside, but have become less pronounced as some of the uncertainty surrounding international trade is receding.” EUR initially lifted, but reversed course to be -0.3% lower at 1.1056. European yields followed the risk aversion trend with 10yr Bund yields -4.8bps to -0.31%.

The move in the AUD is notable, making a full roundtrip over the past 24 hours to be unchanged at 0.6841. Yesterday the AUD rose 0.5% immediately after the jobs figures which surprised to the upside with unemployment ticking down to 5.1% and jobs growth of +29k. The AUD then succumbed to mild risk aversion with a decline in commodity prices also weighing. As for the jobs figures, the further improvement in the unemployment rate will be a welcome development for the Reserve Bank and markets moved swiftly to reprice the chances of a February rate cut, now around a 25% chance compared to 60% previously. While no doubt the timing of rate cuts for H1 2020 is less certain given the solid jobs figures, the RBA still remains some distance away from full employment and we still expect the RBA to cut rates in February as it downgrades its growth outlook on soft consumer data, amid ongoing labour market spare capacity and little inflationary pressure.

US Jobless Claims were broadly inline at 211k against 214k expected, while Kansas City Manufacturing Activity was a little better than expected at -1 against -6 expected.

Headlines outside of the World Health Organisation were on the cautious side, warning that the US-China trade agreement has not solved all issues (US’ Wilbur Ross said new limits on Huawei supplies are coming soon), while the US also reiterated they could put tariffs on EU carmakers despite new trade talks (“he has not ruled out putting tariffs if the negotiations fail”). In US politics, Sanders is reportedly ahead in New Hampshire ahead of the primaries with 29% v Biden at 14% and Buttigieg at 17%. 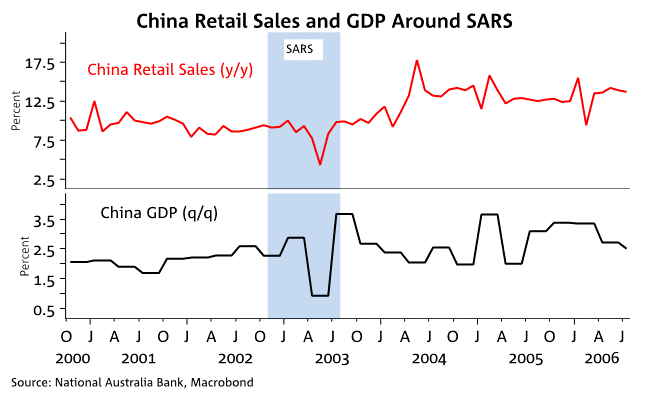 Initial focus will be on the NZ CPI, and then to the PMIs where a whole host of preliminary PMIs are due across the globe. Most focus will be on the UK PMI given mixed data ahead of the BoE meeting next week where markets are around 60% priced for a cut. The German PMI will also be closely watched to see whether the tentative stabilisation that emerged at the end of 2019 continued into 2020. The World Economic Forum in Davos could also be interesting with a host of central bank speakers today, while focus will remain on the Wuhan Coronavirus outbreak with 18 people now reported to have died from the disease. 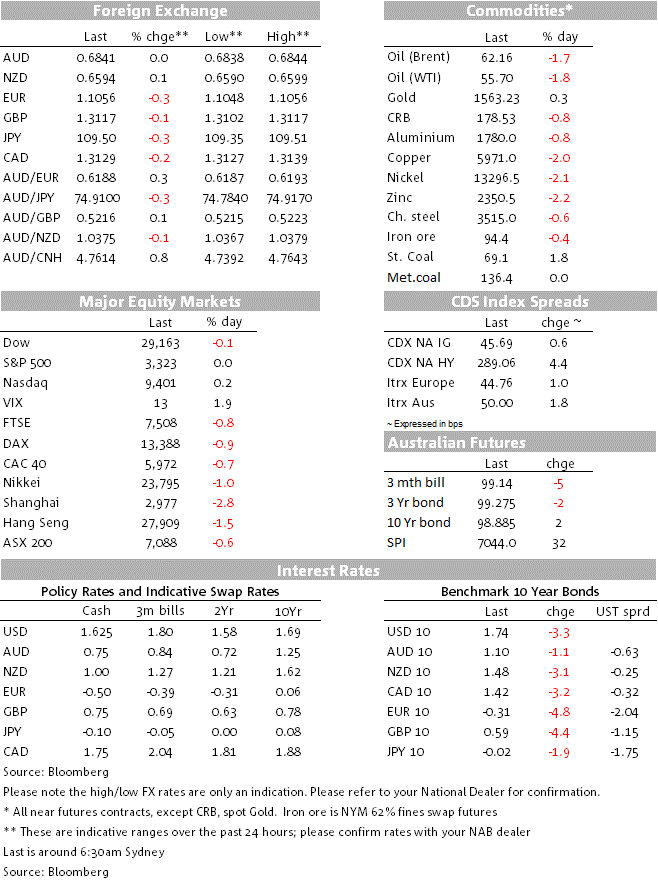