Before we start today, a word of warning. I continue to be amused by the criticism that the ‘non-economist lawyer‘ Christine Lagarde is not suitably qualified to be the next President of the ECB. This presumably on the basis that she hold a mere Master’s degree in economics (earned in front her law degree) from the prestigious Institut d’Études Politiques de Paris, described by Wiki as the ‘primary institution of higher learning for the French political and administrative elite, and one of the most prestigious and selective European schools in the social sciences”. Being no more qualified than Madame Lagarde, I’m fearful I may soon be deemed unsuitable to be penning notes on economic matters for our valued customers.

On a more serious note, in our latest global research team discussion last night, a view several of us shared is that, given fiscal stimulus not still-more monetary accommodation likely holds the key to the near term revival of the Eurozone’s economic fortunes – in particular while the Sino-US trade stoush persists, which it is expected to for a long while yet – there is probably no-one better qualified than the former French Finance Minister and soon to be former chair of the IMF to persuade Eurozone Finance Ministers of the need for action.

To markets and ahead of the 4th July independence Day holiday the S&P 500 has just recoded its third successive record closing high, up another 0.8% to within a whisker of 3,000 (2,996). That said, it is again the defensive sub-sectors of the S&P that have fared best – Consumer Staples (+1.4%) Real Estate (+1.6%) and Utilities (+0.9%). Dividend-heavy stocks are also continuing to do well in an environment where ultra-low or negative government bonds yields around the globe are in the process of going lower still.

Bond markets thus see 10-year US Treasuries -2.4bps lower at 1.95% (most of this latest fall occurring in yesterday’s Tokyo trading day) and the German Bund equivalent down 1.8bp to a new record low of -0.39% – so virtually matching the -0.4% ECB deposit rate. Not a good look if you’re a German banker.

Leading the latest charge lower in government bond yields and the reach for yield out along the curves has been Italy, where the 10 year BTP yield is down a massive 25bp to 1.58%. Much of this boost has come after the European Commission decided not to activate excessive-deficit proceedings against the country after the government made changes to its budget to comply with EU fiscal rules.  There is also a suggestion that under Christine  Lagarde’ s stewardship, the ECB will be at least as dovish as the Draghi led central bank, and quite possibly even more so. She has after all been a vocal supporter of everything the ECB has done to date by way of both conventional and unconventional policy actions.

There has been lot of comment but no significant FX price action from President’s Trump latest FX related tweet: @realDonaldTrump “China and Europe playing big currency manipulation game and pumping money into their system in order to compete with USA. We should MATCH, or continue being the dummies who sit back and politely watch as other countries continue to play their games – as they have for many years!”

Our biggest concern here is that Trump will be minded to impose ‘countervailing tariffs’ on the European auto sector in coming months, justified on the premise that the Commerce Department has recently granted itself the power to do just this is response to what it deems to be countries that keep their currencies artificially depressed. In the meantime and on a more positive note, Trump’s chief economic adviser Larry Kudlow has just been out saying that US-China trade talks will be help in person from next week.

In economic news, The US non-manufacturing ISM for June was 55.1, below the 56.0 forecast and down from 56.9. The June reading was the lowest since July 2017.  At 55.1, it’s back close to its long term average of 54.6. This latest reading is reflective of an economy with somewhat slower growth, but not (yet) at worrisome levels.   The report plays to the notion that while the economy has and is continuing to face high uncertainty from trade tensions that are far from resolved, the current growth stepping off point suggested by this broad-based survey is still relatively positive.

The ADP employment report was also lower than expected in June at 102k (140k expected) and while the May weakness in ADP accurately foreshowed the subsequent weak May non-farm payrolls report, the survey has a chequered track record as a guide to payrolls and we have not yet seen anyone reaching for the red pen to downgrade their forecast for Friday’s release, where the current consensus is 160k according to Bloomberg.

AU May retail sales at 11:30 AEST is the only notable release during the APAC time zone.  NAB forecasts a modest 0.2% lift in sales in May, following a 0.1% fall in April.  Our cashless retail sales index suggests spending growth remains modest. Further, our tracking of fresh produce prices suggests that food sales growth was likely modest again, as vegetable prices weakened further in May, although fruit prices rebounded moderately.

There is no economic news of note offshore save for Eurozone retail sales and the German construction PMI; of more interest will be remarks by ECB chief economist Philip Lane, who is giving a welcome address in Frankfurt

US markets will be closed for the July 4th Independence Day holiday. 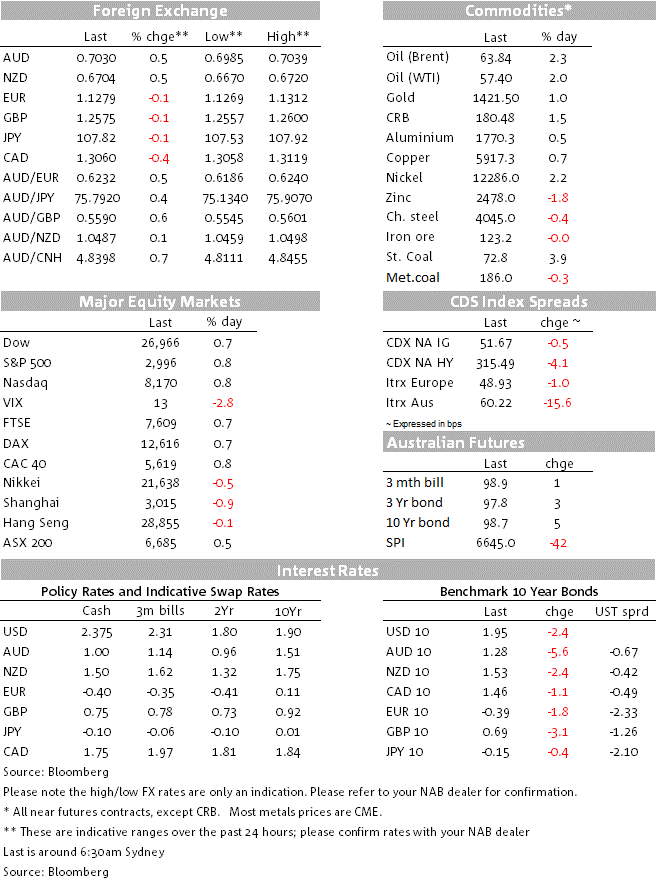