US equities have bounced back after a day influenced by speculative trading on retail platforms with investors spurred on by chatter on Reddit.

Overview: U can’t touch this

Online retail brokers called Hammer Time on a number of high-flying stocks that were being short squeezed higher by their clients after regulators said they were monitoring the “volatility in options and equities markets ”. The broader equity market took that as a positive sign after a number of hedge funds were facing eye watering losses due to the extreme short squeeze. Positive US data also added to the recovery in sentiment with Jobless Claims less than expected (847k v. 875k expected), while Q4 GDP printed close to expectations at 4.0% annualised (consensus 4.2%). The recovery in risk sentiment also saw US 10yr yields turn around from breaking through 1% (low 0.99%) to be up 4.5bps to 1.06%. The USD (DXY) followed suit, reversing yesterday’s gains to be down 0.2%, while the AUD managed to reverse losses to be broadly unchanged.

The FOMC Meeting on Wednesday didn’t have an enduring impact with markets having been captivated by the fortunes of GameStop and AMC which had shot higher in a massive short squeeze in what was pitched as a David and Goliath battle between Main Street and Wall Street. Two key questions were front of mind for: (1) did the surge in these companies reflect a broader market bubble given the surge of retail money during the pandemic; and (2) could some hedge funds collapse due to the need to cover their shorts on the companies that were being targeted. The first question is still contested with most still siding with the low rate view justifying valuations, while the second is less clear.

The WSJ noted three hedge funds that were taking eye watering losses due to their positions (Melvin Capital Management, Maplelane Capital and Candlestick Capital Management), with Melvin Capital Management having received $2.5bn in emergency financing on Monday from its partners which include Point 71 and Citadel (see WSJ for details ). The restrictions placed by retail brokers on the high-flying stocks that were being short squeezed is likely to alleviate some pressures with GameStop (-32%) and AMC (-52%) down sharply on the news. The broader equity market took the restrictions as a positive sign with the S&P500 up 1.8% overnight.

Vaccine news also helped with more reports that Pfizer/BioNTech’s vaccine will still likely be effective against mutations in the virus (particularly the South Africa and UK mutations) according to laboratory studies. The study was done by Pfizer and the University of Texas Medical Branch and is broadly consistent with other preliminary studies by other research groups. While there remains delays in the vaccine rollout (the EU is threatening to tighten rules on the export of vaccines), the efficacy of the vaccine remains and still allows risk markets to price the other side of the pandemic.

US data also contributed to the turn around in sentiment

US jobless claims rose by “only” 847k last week (consensus 875k) and down 67k from the previous week. Changing seasonal factors mean that one shouldn’t read too much into the figures about recent trends but what we can say is that they remain historically very high and consistent with a weak labour market.

US GDP came in close to expected, up an annualised 4.0% in Q4 (consensus 4.2%), following the 33.4% surge in Q3. On a year-on-year basis, growth was down 2.5% in Q4, while monthly indicators have showed slowing momentum through November and December ahead of the $900b fiscal stimulus package agreed just before Xmas.

Germany’s CPI jumped in January to 1.6% y/y, well above the 0.5% expected. The move occurring after the temporary sales-tax cut was phased out, while economic confidence in the euro area slipped by less than expected. Also in Europe, Greece’s No. 2 central bank official was quoted as saying “Monetary policy seems to have reach[ed] limits as interest rates are close to the zero lower bound, meaning that monetary policy cannot currently set [the] inflation rate,” and that it is up to fiscal policy.

FX moves have largely tracked the recovery in risk sentiment. The AUD hit a low of 0.7592, but quickly reversed to be broadly unchanged at 0.7693.

China’s PBoC has been draining leverage from the financial system over recent days, reducing the incentive for traders to use leverage to speculate in the market, with the carry trade in the bond market having become popular. The move helped support CNY, with USD/CNY down 0.5% for the day to just under 6.45.

Other majors don’t show a great deal of movement. Since the NZ close, the USD has dragged the chain, with GBP and EUR showing modest gains and USD/JPY square at 104.30.

A quiet day domestically with only private sector credit figures out. Across the ditch it is also quiet with NZ only having consumer confidence figures. In Europe German and French GDP figures will dominate, while Fed speak starts again with Kaplan and Daly scheduled to speak. Details below: 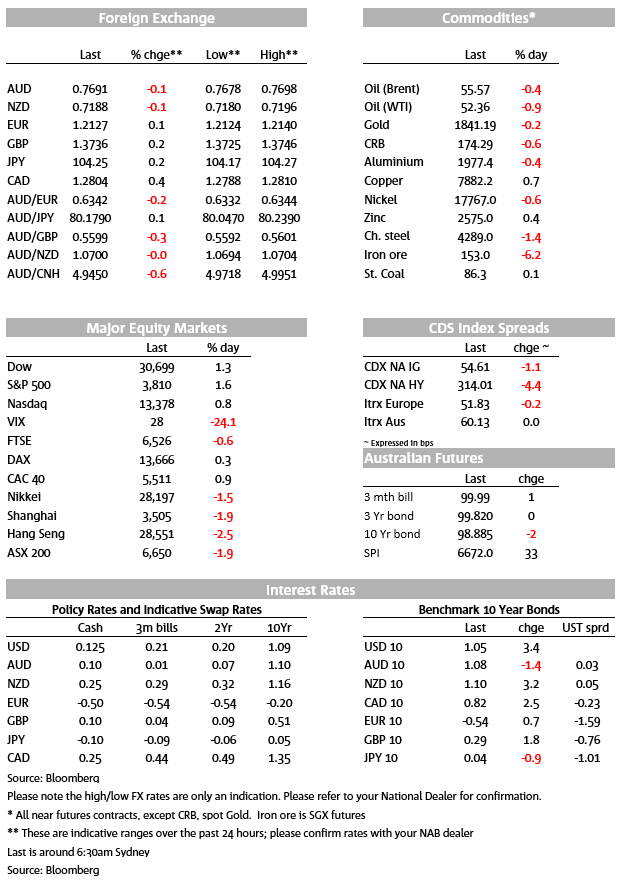