Equities were hit hard on Friday as the Reddit warriors made their mark.

Overview: We didn’t start the fire

Equities tumbled on Friday as some online trading platforms reduced restrictions on high-flying small caps with the likes of GameStop up 67.9% and closing the week up 400%. The S&P500 fell 1.9%, taking the weekly fall to 3.3% and the worst week since October. Markets remain nervous that hedge funds that are short will be forced to sell other assets to cover losses, while the wave of retail money is also prompting debate around equity valuations. Importantly the SEC does not appear to be stepping in the way of this wave of money chasing shorted stocks, suggesting in the near-term this phenomenon is set to continue. As for the Redditers, silver is the next target with silver up around 4% on Friday.

US 10yr yields rose 2.1bps to 1.07%, though did reach as high as 1.10% after a slew of better than expected economic data. The Chicago PMI beat expectations at 63.8 v. 58.5 expected to be at its highest level since July 2018. Overall that bodes well for the more important Manufacturing ISM later tonight. The US Core PCE Deflator also beat at 0.3% m/m v. 0.1% expected, driven by broad-based increases in durable goods.

For those looking for inflation signals, the Employment Cost Index also beat at 0.7% q/q v. 0.5% expected, though compositional effects could be a factor. US 10yr implied inflation breakeven rose by as much as 4.2bps to 2.15% before fully reversing to be unchanged at 2.11%. Paring back inflation talk were headlines suggesting Biden’s $1.9 trillion stimulus plan would have to be scaled down to pass through the Senate. On Sunday 10 Republican senators proposed shaving the stimulus package to $600bn. That means Biden’s stimulus plan will either have to be pared back significantly, or will have to be passed through the budget reconciliation process which will delay any stimulus.

Most commodity currencies higher apart from the AUD (-0.5%), while the USD DXY rose +0.1%. A disappointing Chinese PMI on Sunday has seen the AUD extend losses this morning, down 0.2% to 0.7625 (Manufacturing PMI was 51.3 v 51.6 expected; Non-manufacturing a bigger miss at 52.4 v 55.0 expected). China’s National Bureau of Statistics stated the recent virus resurgence in China “ has had a certain impact on the production and operation of some enterprises” in the industrial sector, while in the services sector accommodation, catering culture, sports and entertainment were showing contractions in activity.

Better than expected Q4 GDP data helped support the Euro on Friday (EUR +0.1% to 1.2136). Germany GDP was +0.1% q/q against 0.0% expected; France -1.3% q/q against -4.0% expected; and Spain +0.4% against -1.4% expected. The three countries suggest upside risks to the wider Eurozone print on Tuesday where consensus sits at -0.9% q/q. Also adding to the more positive tone for EUR was a Bloomberg Interview with the ECB’s Makhlof (Ireland) who pushed back on the need to cut rates further (“Right now, today, I don’t think that’s warranted”), the pushback coming in the wake of recent comments by Rehn and Knott.

The papers today flag the government is committed to letting JobKeeper end in March. Prime Morrison is set to give a speech today reinforcing this messaging in what is possibly an election year setting speech. The AFR’s Phillip Coorey notes PM Morrison will state “you can’t run the Australian economy on taxpayers’ money forever” and that “ The task now is to continue our economic recovery by sticking to our economic recovery plan and exercising the fiscal discipline necessary to ensure that we do not overburden future generations and continue to spend taxpayers’ money wisely”. More importantly for markets, Treasurer Frydenberg suggested the unemployment rate could fall below 6% earlier than expected in MYEFO, which on prior guidance would allow the government to turn its attention to budget repair. The lockdown in Perth announced on Sunday night for five days is unlikely to have an enduring impact on Australian markets with recent virus outbreaks being able to be quickly controlled (e.g. Adelaide and Brisbane).

Finally across the Ditch

The RBNZ tapered its asset purchase program, announcing that  it would be purchasing “only” $570m of government bonds next week as part of its large scale asset purchase programme The RBNZ announcement drove a small increase in NZ bond and swap rates although the backdrop was also one of higher global rates. 10-year NZGB and swap rates closed the day 4bps higher at 1.12% and 1.19% respectively. AUD/NZD also pushed lower (AUD/NZD -0.5%), though there was no immediate reaction on the other crosses.

Domestically the RBA is the key focal point this week with the Board Meeting on Tuesday, along with a speech by Governor Lowe on Wednesday (on “The Year Ahead ”), his Parliamentary Testimony on Friday, and the latest Statement on Monetary Policy (SoMP) with key forecasts also on Friday. While no-one expects any change to policy, markets will be keenly attuned to the Governor’s thoughts on the RBA’s $100bn QE program which expires at the end of April and on the 3yr YCC target given almost a year has passed since it was first announced. We do not expect the Board Statement to give any updated guidance and we will likely have to wait until Lowe’s Parliamentary Testimony to decipher the RBA’s thinking. On the RBA’s forecasts, we would expect forecast upgrades given the strong performance of the economy.

Offshore focus will continue to be on equity valuations given Friday’s losses as well as being another big week for earnings with Alphabet and Amazon reporting on Tuesday. US data will be centred on the Manufacturing ISM on Monday, Services ISM on Wednesday and Payrolls on Friday. For Payrolls consensus sits at 50k and for unemployment to be steady at 6.7%. UK data focus is on the BoE on Thursday where while rates are expected to be on hold, market interest will be on any discussion of negative rates. Eurozone data sees Q4 GDP on Tuesday and CPI figures on Wednesday.

Mostly second-tier data domestically today with Housing Finance, ANZ Job Ads and House Prices. All three should point to continued strength, particularly in housing. Offshore China has the Caixin Manufacturing PMI which is likely to garner more focus after the weaker than expected official PMIs on Sunday. The US has the Manufacturing ISM, while across the pond Europe has the final version of the Manufacturing PMIs, along with German  Retail Sales. Details below: 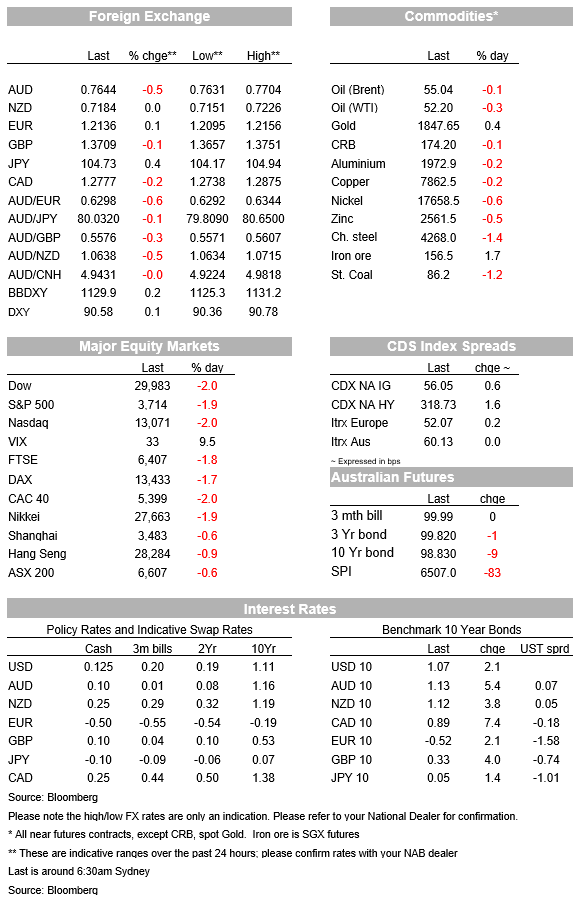