“He’s leaving; (Leaving); On that midnight train to Georgia, yeah; (Leaving on the midnight train); Said he’s going back; (Going back to find); To a simpler place and time, oh yes he is”, Gladys Knight & the Pips 1973.

Midnight train to Georgia is a 1973 classic one that is likely being played at the White House and the Republican National Committee for two different reasons. The state of Georgia certified its election results for Biden and a judge threw out a legal case in Pennsylvania, drastically diminishing any hope President Trump had of contesting the election result. Meanwhile (and alluding to the song’s meaning) an attempt to find a path to a targeted fiscal stimulus deal appeared to have backfired, with the Federal Reserve and the equity market voicing their disagreement to the US Treasury’s decision late Thursday to allow several of the Fed’s emergency lending programs to expire at the end of the year.

Treasury Secretary Mnunchin had hoped to re-allocate the funds in an attempt to get Congress to agree to a fiscal package during the lame duck session. A new fiscal package this side of the Georgia Senate run-offs on January 5 though still looks unlikely and one major US bank is now tipping a negative Q1 GDP print of -1% annualised (see CNBC for details). Nevertheless, the medium-term outlook though still remains positive with Pfizer BioNTech filing for emergency use authorisation on Friday. The process is expected to take a few weeks before a decision is made with the FDA’s vaccines advisory committee said to be meeting on December 8 to 10. Moderna has also said it will release the final results of its phase three trials in the next week or two, following by its own emergency use request. AstraZeneca and Oxford University are expected to release results from their phase three vaccine in the next few days.

Equities were mixed with US equities down -0.7% in the wake of the US Treasury/Fed spat, while European equities were higher (EuroStoxx 50 +0.5%). Also adding to the cautious sentiment was California’s announcement late Thursday of a month-long curfew, banning non-essential work and gatherings between 10pm and 5am. Meanwhile across the Pond, the conversation is turning to whether countries can easerestrictions after a slowdown in new virus cases with France expected to ease some restrictions starting December 1 – an announcement said to be due on Tuesday. Over the week the S&P is down 0.8%, while the small-cap Russel 2000 Index is 2.4% higher and still suggestive of a tilt to cyclicals on the back of vaccine hopes.

Bond markets have been mostly quiet, seemingly not impacted by the US Treasury/Fed spat with trading volumes light. The US 10yr yield fell a marginal -0.5bps to 0.82%. Focus remains on what more the Fed may do come the December meeting with a number of Fed speakers recently flagging a possible tilt of their bond purchases towards the longer end. The Fed Minutes on Wednesday may also provide more clues in that respect. Corporate bond markets were also little impacted by the Treasury/Fed headlines with spreads on both US investment grade and high-yield indices unchanged on Friday, at what are historically low levels.  Underlying conditions in the corporate bond market remain robust, as evidenced by cruise ship operator, Carnival, receiving over $11b in orders for its $2b unsecured junk bond offering on Friday. It is likely many in market expect the Fed’s emergency facilities will be re-activated should market conditions deteriorate again and possibly sooner under Biden Presidency.

FX moves were also modest on Friday with the DXY +0.1% to 92.39. Over the past week though it has been a story of USD weakness with DXY down some 0.6% over the week. The AUD rose 0.4% on Friday to 0.7302 and is up 0.4% on the week. The Pound and the Yen have outperformed over the week with GBP +0.7% and USD/Yen -0.7%. The Pound will be a key focal point this week with the possibility of a UK-EU trade deal being announced this week flagged in the weekend press.

More signs of optimism are emerging with a sharp rebound in activity being seen as Victoria emerges out of lockdown. More restrictions were eased overnight with people allowed to return to offices (subject to a 25% limit), and masks no longer need to be worn outside. The Victoria/NSW border has also re-opened, after having been shut for 137 days. Weekend auction clearance rates were strong with Sydney at 76.2% and Melbourne at 77.1%. Treasury Frydenberg has also proposed to expand the government’s investment tax allowance to incorporate companies with more than $5bn of turnover, if they have less than $5bn turnover in Australia.

Domestically we get the first Q3 pre-GDP partials of Construction Work Done on Wednesday and Capex on Thursday. In many respects these surveys are now dated given the ending of the Victorian lockdown where there had been severe restrictions on the construction industry. A recent ABS survey for November found that of the 22% of businesses with capex plans, 73% of them have plans either equal or higher than usual for this time of year. The RBA’s Debelle also speaks on “Monetary Policy in 2020 at an Australian Business Economists webinar, where no doubt be quizzed about the recent run of upbeat data and what that means for the RBA’s outlook. Note NAB recently upgraded its forecasts for the economy, expecting GDP to bounce by 4% q/q in Q3 and for the level of GDP to return to its pre-pandemic levels by the end of 2021 (a full year earlier than previously expected).

Offshore virus cases and the re-imposition of restrictions remains the key focal point. It’s also a big week for Brexit (the gift that keeps on giving) with a degree of optimism after sources suggest a deal could be struck towards the end of the week, or more likely next week – though the UK would need to compromise according to EU sources (key areas of contention remain fishing rights and environmental/labour standards).

Data wise the key touch points will be the Global PMIs on Monday with particular focus on Europe and the US given the resurgence of the virus and the re-imposition of restrictions. US data will also be under increasing scrutiny with signs of slowing – key pieces include Consumer Confidence on Tuesday, PCE figures on Wednesday and Jobless Claims also Wednesday – note it is the Thanksgiving Holiday in the US on Thursday. The FOMC Minutes on Wednesday will also likely be watched closely for what more the Fed is willing to do given a fiscal package during the lame duck session is looking increasingly less likely.

Domestically it is quiet with only the Markit PMIs which do not tend to be market moving in Australia and no consensus is available. Across the Ditch NZ has Q3 Retail Sales Volumes with a sharp +19.0% q/q bounce expected after last quarter’s lockdown contraction of -14.6%. Outside of the antipodeans, the Global PMIs are the key to watch with focus on how activity is holding up given the resurgence of the virus and the re-imposition of restrictions. Details below: 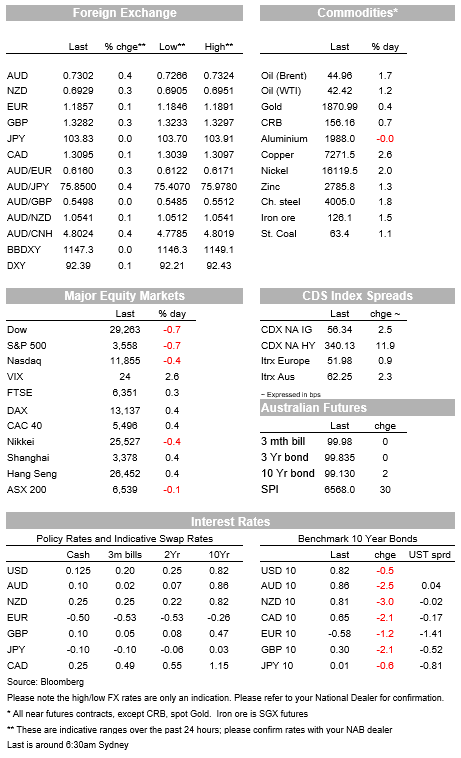