Markets in Europe seem to have been encouraged by the news that Russia is to start vaccinating key workers in the next few weeks.

And we’re not little children, And we know what we want

And the future is certain, Give us time to work it out

We’re on a road to nowhere, Come on inside – Talking Heads

It was a night of two halves

Initially equity markets were travelling with a skip in their step with European shares closing broadly stronger boosted by positive data, vaccines hopes and President  Trump talk of capital gains tax. This all change later in the session as it became clear that US politician are nowhere near reaching an agreement on a new fiscal stimulus. The news saw US equities make a drastic u turn with the S&P 500 falling  for the first time in eight sessions. Longer dated UST yields have led a decent bear steeping of the UST curve while the USD has edged higher with JPY, GBP and NZD the big underperformers. AUD/USD is a tad softer, trading at 0.7144.

US political stalemate has been the catalyst for the big reversal in US equities in the last couple of hours of trading. Speaking to Fox News, US Senate Republican leader Mitch McConnell confirmed that after talks had broken down late last week, White House negotiators had not spoken on Tuesday with US Congress Democratic leaders. The hope was that US politician will look to restart negotiations on a new fiscal stimulus this week. Now with no talks scheduled, the deadlock between Republicans and Democrats is at risk of dragging on for weeks. The S&P 500 closed down 0.80% and the NASDAQ was -1.69%.

Prior to this news

Equity markets were enjoying broad gains  with the Stoxx Europe 600 Index closing  1.7% , its best increase in a week and with all industry groups showing positive returns. Market participant were buoyed by a positive German Zew survey, encouraging virus statistic and vaccines hopes from Russia.

Against expectations for a decline

The Zew survey’s Expectations reading climbed to 71.5 vs 59.3 previously and 55.8 expected, adding to signs that Europe’s largest economy may be bouncing back more quickly than anticipated. The German consumer has already shown signs of a revival and now there are hopes the country’s manufacturing sector will followed private consumption out of a record second-quarter slump.

Particularly in the US with the trend in COVID-19 new cases and hospitalisations remaining downwards, providing hope that social distancing restrictions can be removed in time across affected states and the broader reopening process for the economy can continue.  Russia became the first country to grant regulatory approval for a COVID-19 vaccine, despite only two months of trials. The latter news seemingly having a positive impact on the Stoxx Europe 600 travel & leisure sector, +4.5% on the day.

The broadening in equity market gains

Prior to the US political statement news was a positive sign suggesting an improvement in market confidence over  the economic recovery. These theme appears to have been reflected in the move up in core global yields overnight. Longer dated UST yields have led the charge, but core European yields also moved higher with 10y Bunds up 5bps to -0.479%. The 10-year Treasury yield has risen 7bps to 0.64%, trading to an overnight high of 0.666% .

The 10-year real yield on US inflation-protected securities is up a lesser 4bps, to -0.97%.  US market-implied inflation expectations have fully recovered their losses from the crisis, with the 10-year ‘breakeven inflation’ rate up to 1.64% (still below levels consistent with the Fed’s current 2% target).  Supply has also been a factor at play, IG credit issuance remained elevated with 11 issuers pricing $18 billion, while dealers prepare to underwrite record-size 10- and 30-year auctions over the next two days. There is a record $112b of Treasury bond supply this week for the market to digest (the Fed is currently buying $80b per month).

Gold is down just under 6% while in FX JPY is big underperformer reflecting its higher degree of sensitivity to 10y UST yields, courtesy of the BoJ YCC policy. USDJPY now trades at £106.51( up, 0.55%).

NZD has also been one of the big underperformers over the past 24 hours, down 0.27% 0.6577, on news that there has been COVID-19 community transmission in NZ, following the discovery of four cases in one Auckland household.  Auckland moves to COVID Alert Level 3 from midday today for an initial three days, although the risk is clearly very high that this is extended.  The remainder of the country moves to Level 2.  Alert Level 3 means non-essential workers are encouraged to work from home, schools and childcare centres will close for all but essential workers and most gatherings of more than 10 people are not permitted.  Alert Level 2 is less onerous, with gatherings of up to 100 people still permitted and restaurants and bars can stay open, albeit within social distancing guidelines.

Down 0.15% to 1.3055 on the back of softer than expected jobs numbers. The number of Britons with jobs tumbled by 220,000 in April to June, the period that saw restrictions at their most severe. The Office for National Statistics said early indicators for July suggest that the number of employees on payrolls is down around 730,000 compared with March.

The AUD is a tad softer, down -0.11% to 0.7143 with price action overnight reflecting the initial improvement in risk sentiment (overnight high of 0.7190) and then a late decline as the US equity market took a turn for the worst.

As I am about to press the send button, Bloomberg notes that Joe Biden has chosen Senator Kamala Harris as his running mate, betting that her ties to the African-American community and self-branding as a “progressive prosecutor” will help propel him to the White House. 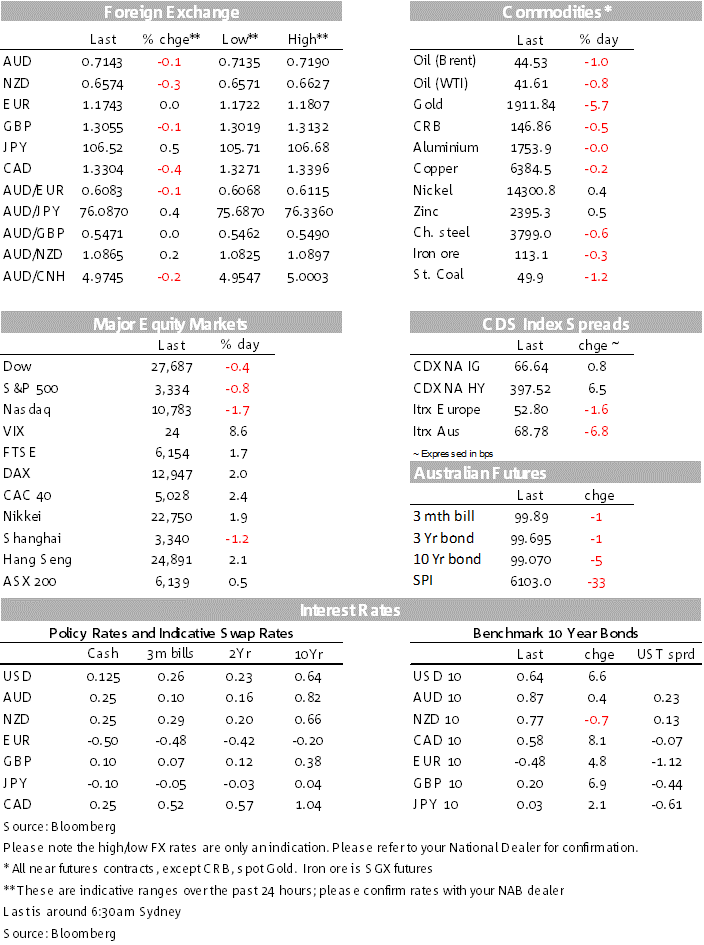