Markets Today: Soft in the centre

Markets were quick to dissect Friday’s keenly awaited US Q1 GDP report and dismiss the much better than expected 3.2% headline print – even if President Trump did not, describing it as ‘smashing expectations’.  Knee jerk gains for the US dollar and Treasury yields proved fleeting upon realisation that 1.7% of the 3.2% rise was accounted for by inventory accumulation and a quirky 1% contribution from net exports.  The latter is ostensibly good news (from America’s perspective) and could be read as evidence Trump’s trade actions against China are working, but the reality is this was in large part down to a slump in imports (-3.7%) after an earlier surge as firms stockpiled in front of last year’s tariffs.

The presumption is that growth in Q2 is likely to suffer from bloated inventory levels at the start of the quarter and probably a payback in the net-export contribution, though we should also note that historically Q1 GDP has been revised up by a little over 0.5%. So in the final analysis, history may yet record that the US grew at above 2% in Q1 despite much of the government being shut for the whole of January, so on a par with Q4 2018.  As things stand though, the GDP data shows ‘Final Demand’ (GDP less inventories and net exports) running at just 1.5%.

More/as important for markets than the soft underbelly to the GDP figures was the inflation news, the Fed’s preferred core PCE deflator printing a low-ball 1.3%, down sharply from 1.8% in Q4 and below the 1.4% consensus estimate. It is the thought that a downturn in inflation could have the Fed cutting rates before 2019 is out – at a time when the Fed is openly discussing wanting to tolerate a period of above target inflation to make up for past shortfalls – that had the interest rate markets moving the implied probability of a 2019 easing out to 106% from 90% prior to the GDP release.

There was not much else out in offshore market on Friday data-wise; the final University of Michigan consumer sentiment index was revised up to 97.2 from 96.9 preliminary (97.0 expected) with the 5-year inflation expectations reading steady at 2.3%.

In other news, President Xi addressed some 40 world leaders at the Belt and Road forum in Beijing and, as reported by Bloomberg, it seemed well directed at President Trump who didn’t attend.  Xi spent a large portion of his speech pledging to address state subsidies, protect intellectual property rights, allow foreign investment in more sectors and avoid competitive devaluation of the yuan – these being consistent with US demands in current trade negotiations, supporting the case that some agreement will soon be reached. US Trade Representative Robert Lighthizer and other trade officials will be back in Beijing this week for further trade talks.

Equity markets liked the interest rate/Fed policy connotations of the GDP report to push the S&P500 to a new record closing high (+0.5% on the day, with the Dow and NASDAQ both finding +0.3%). Health care, financials and consumer discretionaries – the three sectors that drove the stock market to new highs earlier in the week – were again at the forefront of gains on Friday.

Bond markets responded positively to the GDP report alongside money markets, 10yr US Treasuries quickly reversing a run-up from 2.52% to2.54% on the headline GDP number to finish in NY at 2.50%. The 2-year Note yield ended 5bp down on level prevailing during our time zone on Friday, at 2.28%

NZD drew some support from another interview with RBNZ Governor Orr, where on economy he sounded upbeat, saying he wasn’t particularly worried about the recent slowdown in growth, as the labour market was in a good position, the fiscal position was strong, monetary policy still had “petrol in the tank”, NZ’s terms of trade were in a good space, and the exchange rate was behaving well. “In a relative sense, compared to many parts of the world, we’re in a pretty good spot”, he added. The RBNZ meets on 8th May, a day after the RBA.

NOK was the only G10 currency down on the night versus a weaker USD, thanks to a 3% or ±$2 drop in oil prices, all attributed to a tweet from President Trump that he had spoken to Saudi Arabia /OPEC demanding action to get oil prices down. CAD in contrast enjoyed the benefit of the weaker post-GDP USD.

Nothing on the local calendar today either side of the ditch and offshore only the March US PCE data, usually of lesser interest given the quarterly numbers were released on Friday, but of some importance given we see some risk of a below consensus outcome (1.6% vs.1.7% consensus) and which if so further adds to the risk that PCE inflation could drop down to 1.5% during Q2.   Also the Dallas Fed Manufacturing Activity index.

Tuesday is more interesting with latest RBA credit figures (for March) and the ANZ Business Confidence readout, plus we get latest official vintages of China’s manufacturing and services PMIs (Caixin manufacturing version on Thursday). The NZ Q1 labour market data on Wednesday is important in front of the May RBNZ. AU building approvals are on Friday.

In the northern hemisphere this week, the highlights would appear to be US manufacturing ISM and FOMC (both Wednesday) and Friday’s April payrolls report.  Alphabet (Tuesday) gets star billing as far as the ongoing US earnings season is concerned. 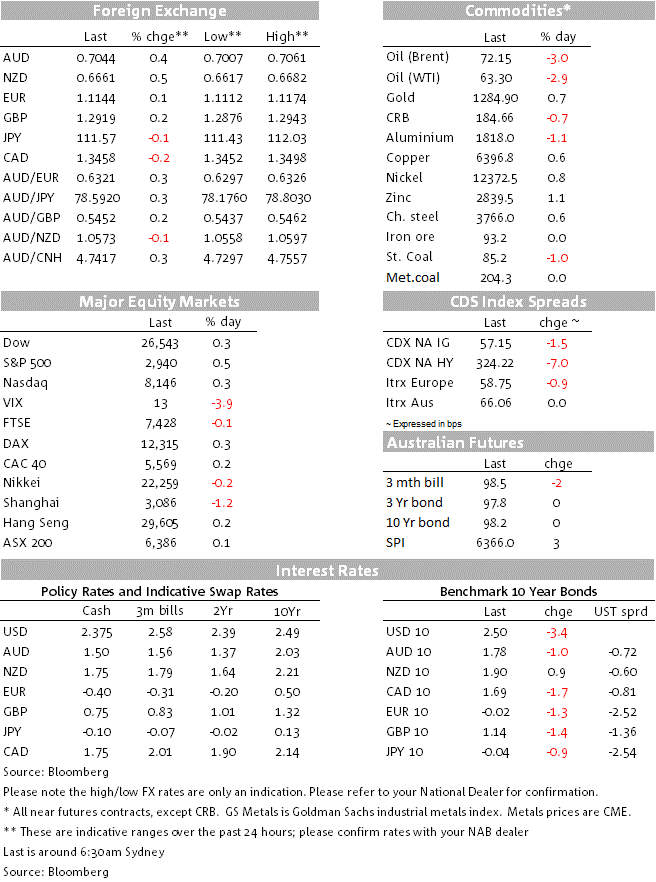