Markets Today: Stocking up and moving up

Overview: Party in the USA

The S&P500 closed to be at a new record high of 3,389.78, with the new high 0.1% above the February 19 peak of 3,386.15 and is the fastest bear market recovery ever in just 126 days. Since the S&P500 reached its intra-day low of 2,191 on March 23, it has risen 54.7%! Helping to support equities today was strong US housing starts/permits (circa +20% m/m v. circa 5% expected), and renewed hopes around a US fiscal package with Pelosi stating she was willing to compromise on a slimmed down stimulus now with more to come in January (i.e. after the US Presidential elections).

The USD meanwhile remains firmly on the backfoot with the DXY -0.6% overnight and at 92.28 is at its lowest level since May 2018. A weaker USD is now a widely held consensus view and speculative positions are short, while there are plenty of articles going around about Russia and China settling trades in Euros rather then Dollars (e.g. see Axios overnight). USD weakness was broad-based with EUR +0.6% to 1.1935 and USD/Yen -0.5% to 105.31. Outperforming was GBP +1.1% on little new news and NZD +0.8% on likely some reversal given its underperformance over recent weeks. The AUD/USD meanwhile peeled off some if its moves after it a high of 1.1044 yesterday, currently 1.0971. The AUD was little impacted on net by the latest trade dispute with China (this time over wine), up 0.5% to 0.7244. Yields fell with US 10yr yields -2.0bps to 0.66%. The divergence between yields and equities remain stark, though on some valuation models low yields are a key driver.

First to the US fiscal package

Hopes that an interim package could be agreed to were re-ignited overnight with House Speaker Pelosi indicating a willingness to cut their proposals in order to seal a deal with the US Administration and then do more in January following the November elections: “we have to try to come to that agreement now…we’ll take it up again in January”. A key sticking point in negotiations so far has been the size of the proposed package with Democrats wanting a package worth about $3.5bn and the Administration and Republicans closer to $1 trillion; some of the difference being funding for state and local authorities.

Treasury Secretary Mnuchin was cautiously positive, while perhaps some impetuous for a renewed package is being driven by some notion that President Trump’s extended unemployment benefit supplement might run out sooner than expected – one Labor Department official said federal funding allocated for the enhanced jobless benefit could run out within a month and half if all states participated – that would see the supplement expire sooner than December and make a comprehensive fiscal package more necessary.

In terms of data it was a quiet night

Though strong US Housing Starts and Permits did support sentiment. Housing Permits were up 18.8% m/m and Starts were +22.6% – all well above the consensus of around 5%. The data beat also continues the run of US data surprising to the upside. The US housing market remains a bright spot in the economy, driven by record low mortgage rates and a desired move to the suburbs for many. Easy monetary policy is stoking the economy and asset prices, while the US Federal Reserve is on the record saying that higher interest rates aren’t a threat and a period of above-target inflation will be tolerated.

Australia-China relations continue to sour, this time over wine

The Chinese Ministry of Commerce has said it has received an anti-dumping complaint and it is starting an immediate investigation; a positive finding could see anti-dumping duties imposed. Australia exported around $1.2bn worth of fine last financial year, with strong growth from $0.5bn in 2015-16. While an important export market, wine exports to China comprised just 0.7% of total trade with China in 2019 and accordingly there has been little reaction in FX or rates. The investigation is widely interpreted in Australia as being symptomatic with the deteriorating Australia-China bilateral relationship (see AFR for details).

Yesterday’s RBA Minutes said little new in addition to what Governor Lowe said last Friday and what was in the recent August SoMP. The RBA thinks its current package is working with little need to adjust that now, though doesn’t rule out doing more if needed: “Members reaffirmed that there was no need to adjust the package of measures in Australia in the current environment. Members agreed, however, to continue to assess the evolving situation in Australia and did not rule out adjusting the current package if circumstances warranted.”

A quiet day both domestically with no data scheduled. It is also quiet offshore with only the US FOMC Minutes likely to be watched closely for hints on what the Fed could announce regarding forward guidance come September: 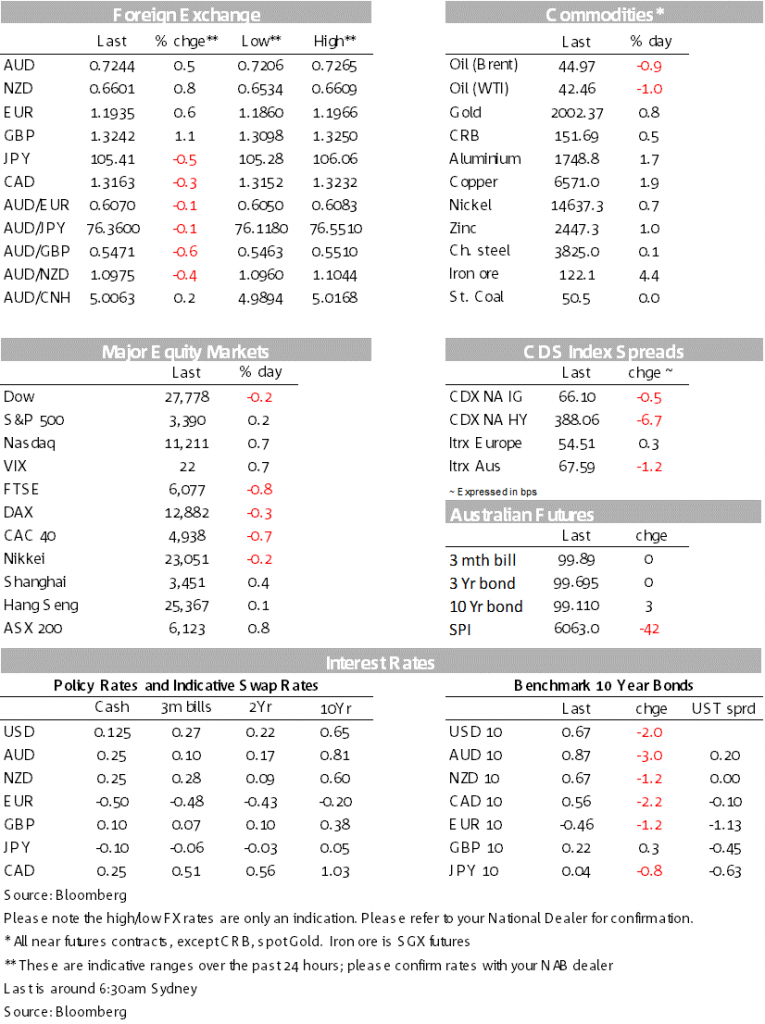