There’s been a sharp turnaround in market sentiment as the US announced delays to the extra tariffs on Chinese imports for certain consumer-sensitive products.

The US announced it will delay additional tariffs on China for certain products until December 15, while also exempting some goods based on “health, safety, and national security and other factors”. It is not clear what percentage of the $300bn of goods that were set to be subject to a 10% tariff by September 1 would be affected (some suggest up to 50%), but markets have taken it as a signal that President Trump has blinked and is sensitive to the fall in stocks seen to date. Stocks are sharply higher (S&P500 +1.4%) along with shorter-end rates (US 2 year yields +8.4bps to 1.67%) and the oil price (WTI +3.9% to $57.07). The Yen is sharply lower with USD/YEN +1.3% and China proxies are higher, including the AUD +0.6% to 0.6793, while the renminbi has rallied strongly with the offshore USD/CNH -1.2% to 7.0105. The exception to the exuberance seems to be Europe with EUR and GBP both lower; a disappointing German ZEW survey has helped drag EUR -0.4% with the USD (DXY) up 0.4% overnight.

First to the tariff announcement. Overnight the USTR announced it would delay the 10% tariff on some consumer-sensitive goods to December 15 – products in this group include cell phones, laptop computers, video game consoles, toys and footwear and clothing. Further, some items would also be exempt from the tariffs altogether due to health, safety and national security (see USTR announcement for details). President Trump later explained the timing was to save “the Christmas season” – shielding consumers from higher prices. A cynical view then is that the delay is purely for political timing rather than a more substantive change in the US’ approach to the US-China relationship. Nevertheless, markets have rallied hard on the notion of Trump blinking, but overall a high degree of scepticism should remain and an imminent deal is unlikely given Trump has foreshadowed he is going to be campaigning hard on the issue in the 2020 election.

Reflecting the potential of tariffs to result in higher consumer prices, the US CPI printed higher than expected in July with Core at +0.3% m/m against +0.2% expected. Driving the read was some flow through from the tariffs that were increased in May (floor covering prices are up some 6% y/y and bedding by 3.9% y/y), though the dominate factors were higher used car, medical services and airline fares. Outside of those categories though inflation remains relatively subdued.

Also adding to the positive tone overnight were reports of the US and China talking for the first time since the latest tariff announcement. US Treasury Secretary Mnuchin and Chinese VP Liu talked over the phone with an agreement to talk in two weeks’ time. Formal meetings are still scheduled for September. President Trump described as “very productive”. Taking some gloss off though is continued Hong Kong protests – riot police overnight cleared protestors from the airport.

Stocks rallied sharply on the announcement with the S&P500 up some 1.4%. Technology stocks have unsurprisingly outperformed given the products facing a delay in tariffs include cell phones/laptops with the IT sub-index +2.5% led by Apple (+4.2%) and HP (+3.2%).

Yields were also sharply higher with the US 10yr yields +5.8bps to 1.70%, having traded as low as 1.62% earlier in the session. Moves were more pronounced at the shorter end with US 2 year yields +8.4bps to 1.67% and the commonly followed 2/10s curve has flattened to almost zero. Markets though continue to price a high chance of Fed rate cuts with around 2.3 cuts priced by the end of the year (or around 56.7bps currently).

In FX haven currencies fell sharply with USD/Yen +1.3% to 106.75. Most risk-sensitive currencies were higher along with China proxies such as the AUD (+0.6% to 0.6798) while the renminbi rallied sharply with USD/CNH -1.2% 7.0137. The exception to the exuberance seems to be Europe with EUR and GBP both lower; a disappointing German ZEW survey (see below) has helped drag EUR -0.4% with the USD (DXY) up 0.4% overnight.

Despite today’s headlines, uncertainty over trade is likely to continue to weigh on the global economy. The German ZEW survey overnight is a potential herald of this with the ZEW falling to its lowest level since December 2011 at -44.1 against -28.0 expected and -24.5 prior. The last time the ZEW survey was this low was in the depths of the European sovereign debt crisis. Germany releases Q2 GDP figures later today where the consensus looks for a slight contraction (see below) and focus will be on to what extent the slowdown in the manufacturing side of the economy is weighing on the larger services sector.

Also out overnight were UK labour market data, that continues to be largely ignored due to Brexit headwinds. Of note Wages excluding bonuses rose 3.9% y/y against 3.8% expected, Employment was stronger (+115k against +60k expected) and the unemployment rate remains low though ticked slightly higher to 3.9% from 3.8%.

A very busy day ahead in APAC and Europe, but largely quiet in the US. Domestically we have Consumer Confidence and Q2 Wages, then focus will be on the Monthly Chinese Activity Indicators (Industrial Production, Investment and Retail) and German GDP. The US has mostly second-tier data with only import/export prices scheduled. 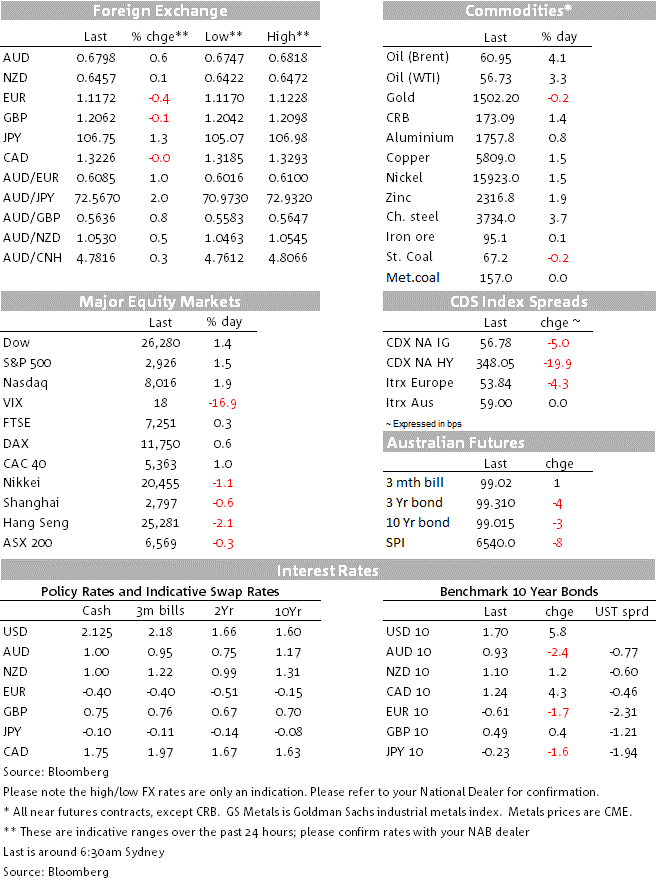 Liquidity management beyond the crisis

2020 has presented some unique challenges for corporate treasurers. Looking ahead, now is the time for many to review liquidity management strategies to ensure they are well placed as we adjust to a new post COVID-19 normal.