Markets Today: The battle to be king of the doves

Central bankers are fighting amongst themselves as to who can sound the most dovish.

I ain’t gonna stop until I’m done (don’t stop it), I ain’t gonna quit until I’ve won
Now baby don’t you stop it, stop it
Even if wanna to, you can’t stop us now, Don’t stop the party – The Black eye Peas

After opening lower, US equities have enjoyed a broad and steady rise over the course of the overnight session, boosted by dovish comments from Fed Chair Powell. The Fed Chair pushed back on the risk of a persistently high inflation and reiterated the need for accommodative policies while showing no concerns over higher asset. 10y UST yields briefly traded above 1.40%, commodity prices excluding Gold are broadly stronger, supporting pro-growth currencies with NZD top of the leader board and now trading above 74c.

Technically Fed Chair Powell did not reveal much new at his hearing before the House Financial Services Committee. Powell effectively reiterated the Fed’s commitment to maintaining the Bank’s ultra-accommodative policies until “substantial further progress has been made,”. But with the recent rise in equity prices along encouraging sign the US economic recovery could be entering a stronger phase, aided by vaccine roll outs, the market was wary that Powell may show less appetite to support the economy.

Instead, Fed Chair Powell made it very clear that the improvement in the economic outlook thus far will not instigate the Fed to tighten monetary policy anytime soon. The Fed Chair noted that “Our policy is accommodative because unemployment is high and the labor market is far from maximum employment,” and importantly too Powell pushed back over concerns of higher inflation, noting that  it “could take more than three years to hit the 2% average inflation target” while also showing no concerns over asset prices elevation “by some measures”.

So, the punch bowl ain’t going anywhere anytime soon and the policy backdrop should remain supportive for risk assets for some time still. Equity market loved the message and commodities also joined the party.

After gapping lower at the open, following a negative lead from Asia, main European and US equity indices climbed higher after Powell’s remarks. Asian markets closed lower spooked by the news of a Hong Kong stamp duty hike from 0.10% to 0.13%, the Hang Seng ended -2.99% and China’s CSI was -2.55%. In the end this proved to be a short-lived headwind with European and US equities confirming the reflation trade remains alive and kicking. Cyclical and value sectors led the rise in Europe with travel shares such as TUI and Carnival back in vogue as the markets prices the prospect of Europeans going on holidays this summer. The Stocks Europe 600 Index closed 0.5% higher with the Travel & leisure sector (+1.9%) leading the rise while energy (1.7%) shares and miners (+1.5%) were not too far behind.

Equity investors didn’t show any concerns on the move up in UST yields overnight.  This of course is the other side of the reflation trade, 10y UST yields traded to a new recent high of 1.4337%, before buyers came in pushing the yield down to 1.3860%where it currently trades. Overnight, the 5y auction met tepid demand closing at 0.621%, a 0.6 bp tail and the highest auction yield in a year. The bid to cover ratio of 2.24 was the lowest since the end of 2018. Meanwhile the AU 10y bond futures have also remained under pressure, trading down to an overnight low of 98.28, before recovering to 98.325, an implied yield of 1.675%.

Moving onto currencies the positive risk backdrop and higher commodity prices with copper now at its highest level in a decade (@$9326, +1.2%) and oil prices are up more than 2% has supported pro-growth currencies. NZD is at the top of the G10 leader board, up 0.90% and now trading above the 74c mark (@0.7412) for the first time since February 2018.

On his morning note, Jason Wong, my BNZ colleague, noted that It was always going to be tough for the RBNZ to hold back a post-MPS rise in the NZD, despite the Bank’s valiant effort to sound dovish. Yesterday, the RBNZ left its policy levers unchanged as expected (OCR @0.25%, LSAP and FLP unchanged) and kept a decidedly cautious tone at today’s MPS. That said, our BNZ colleagues note that much has tightened up below the surface, hinting at the prospect of the RBNZ moving closer to reducing stimulus. BNZ remains comfortable with their call for a first hike in May 2022.

The AUD now trades at 0.7946, up 0.34% relative to levels 24hrs ago. It seems that it is only a matter of time for the aussie to have a look above 80c. Our fair value models suggest such a move would not be inconsistent with fundamentals and technically there is not a lot of resistance for the pair to continue climb above the big figure.

The euro ( -0.08%), GBP (-0.1%) and JPY (0.62%) are softer against the USD with the greenback seemingly drawing some yield support against these currencies and perhaps also reflecting the US current economic advantage reflected in the recent PMI releases. 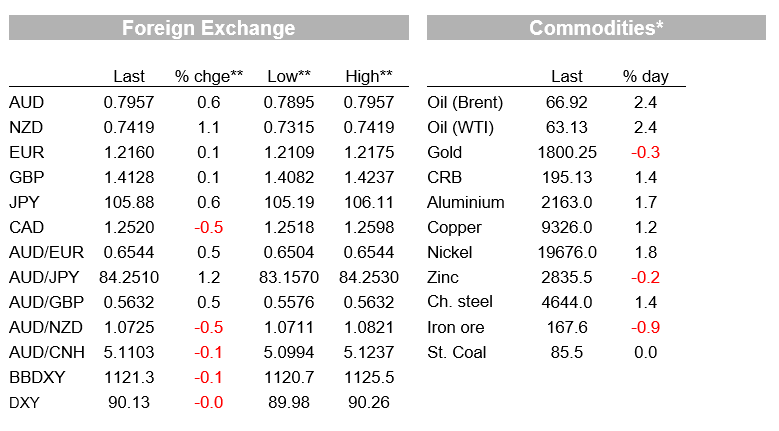 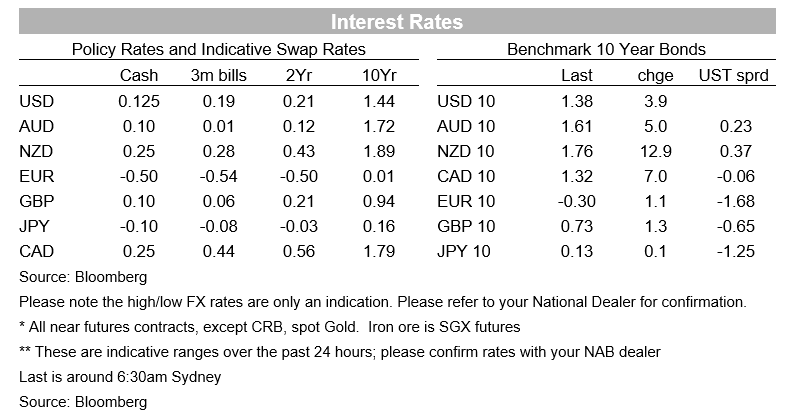