The US dollar continued to slide, with a fall in shares and US Treasury yields, as GDP numbers showed the extent of the shock to the US economy in Q2.

Global stock markets were under pressure during the European morning  with +/- 2% declines for many of the European bourses,  even before President Trump tweeted (late Wednesday night his time) that because of mail-in balloting, “2020 will be the most INNACURATE & FRAUDULENT Election in history. It will be a great embarrassment to the USA. Delay the Election until people can properly, securely and safely vote???” (sic).

The tweet turned a roughly 1% decline in the S&P futures into minus 2%, but stocks rallied back quite smartly from there with the S&P 500 just closing with a loss of just 0.4% and the NASDAQ with a gain of 0.4%, the latter in front of the slew of Big Tech earnings reports (see below). This after Trump’s tweet was quickly condemned by Republican Senators, plus there was appreciation that any such move would require the support of the Democrat controlled House of Reps. which of course isn’t going to happen.

The mere suggestion by Trump of a delay nevertheless does play to concerns that the election result will be challenged in November (should Trump lose) and that, because of the likely larger than usual share of votes via mail in ballots due to the pandemic, we might not now the result on election night itself.  Recall the 2000 election where several recounts in Florida – remember the ‘hanging chads’? – meant the result wasn’t known for several for weeks.

Post the NYSE close, Apple, Amazon, Alphabet ad Facebook have all reported better than expected revenue numbers. Their stock prices all jumped, though in the case of Alphabet an initial 2% jump is now a 1% decline after the Google parent noted a $2.6bn fall in advertising revenue versus the same period of 2019 (revenue beat its street estimate, $31.6b vs. 30.45bn expected).

Of particular note in FX markets, was that despite the quite violent sell-off in stocks post the Trump tweet, the DXY index fell by 0.3%. The suggestion here is that even if we do see a more protracted ‘risk off’’/negative US equity tone in the lead up to the election as uncertainty builds, it will not necessarily translate into support for the greenback.

EUR/USD and GBP/USD have led the latest declined for the USD, which takes the DXY index to a new 2-year low just below 93.0. Of note here is that as well as the ongoing re-pricing of the EUR following last week’s recovery fund deal and, it appears, increased optimism toward a UK-EU post Brexit trade deal being struck by the end of September or early October, US bond yields, both real and nominal, continue to fall.  US 10s fell by a further 3.5bps to 0.54% – a record low if the exclude the very temporary plunge to 31bp on March 9, with real yields down another 1.5bps to be close on -1%.

In economic news, US Q2 GDP was terrible, but not quite as bad as expected. GDP contracted at an almost 33% annualised rate in Q2, mainly due to falling personal consumption – close on 70% of GDP – minus 35% annualised, with households constrained from spending under the lockdown.  The US economy has recovered since the trough in April although high frequency data suggest some levelling off in activity recently. Weekly jobless claims rose slightly again last week, and remain at very high levels, implying that the labour market recovery is starting to stall.

In Germany and ahead of tonight’s pan Eurozone data, Q2 GDP was the worst since records began, -10.1% q/q and weaker than the -9% expected. German CPI also came in much weaker than expected, the EU harmonised measure falling 0.5% on the month to now be unchanged yr/yr, against expectations of -0.2% on the month and +0.3% yr/yr. 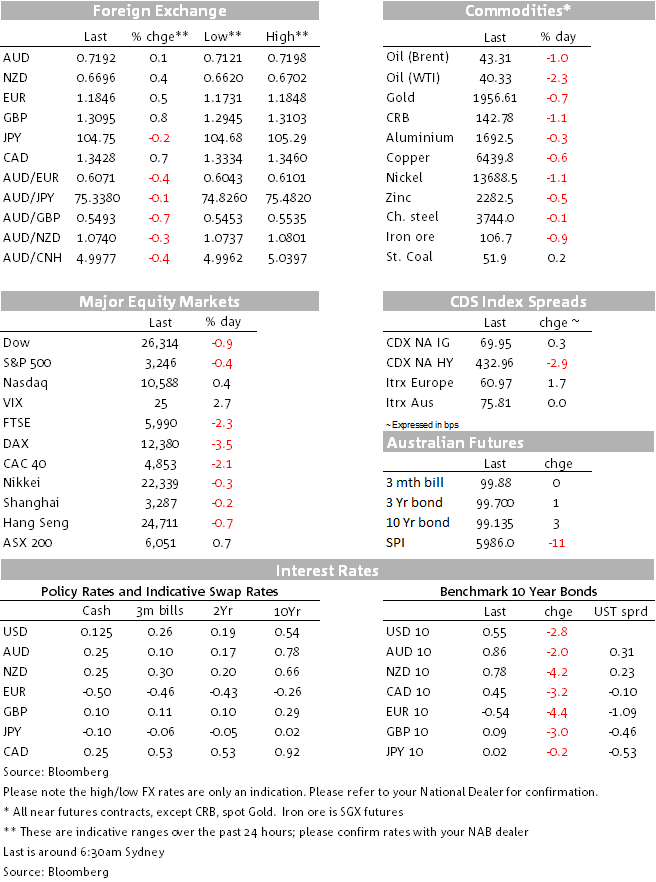