Markets Today: The recession we only just had to have

Australia has entered a recession but, as Josh Frydenberg was quick to point out yesterday, the Q1 fall in GDP was miniscule compared to most of the rest of the world.

An’ Stevie knows that nobody’s gonna bring me down

Till I reach the highest ground, ’cause me ‘n’ Stevie, see

We’re gonna be a sailin’ on the funky, funky sound (till I reach the highest ground) – The Red Hot Chili Peppers (Stevie Wonder)

Global equity markets have remained in a buoyant mood fuelled by the prospect of economies reopening while data releases have supported the notion that the worst of the economic downturn could be behind us. The USD has continued to lose its safety bid with JPY the preeminent safe-haven currency the only G10 to underperform the greenback. US-China tensions are still simmering in the background, but not enough to rattle markets. The positive vibes also triggers a broad sell-off in core global sovereign bonds.

The notion that the worst of the Covid-19 economic slump may well be behind us gained credence over the past 24 hours with encouraging data releases from China, Europe and the US. Yesterday China’s Caixin Services PMI revealed a sharp rise in May to 55.0, well above the consensus of 47.3 and 44.4 previously. The strong beat takes services activity and its new orders index to its highest levels since late 2010. Caixin noted that activity was boosted primarily from domestic demand recovering following the earlier easing of restrictions, while external demand remained weak.

Germany’s May unemployment rose 238k versus 372k in Apr. The rate rose to 6.3%, from 5.8% in April and then the big overnight surprise came from the US. The ADP employment report pointed to a loss of almost 2.8 million US jobs in May, much better than economist expectations and potentially pointing to an upside surprise to nonfarm payrolls tomorrow night (8m job loss expected). The ISM non-manufacturing index rose modestly from 41.8 to 45.4, essentially matching expectations, but importantly business activity (41 vs 26 prev.) and new orders (41.9 vs. 32.9 prev) subgroups rebounded strongly, albeit to levels that still imply contraction.

Equity markets were already travelling with a spring in their step

But the supporting nature of the data releases has certainly helped the notion that the reopening of economies is being matched by an upliftment in economic activity. European equity indices have again led the charge, up by 3-4% while in the US the S&P500 closed 1.36% higher and the NASDAQ was +0.8%,after briefly touching an all time. Bank stocks, which have a leveraged exposure to the economy, have led gains on the S&P500 overnight (+5%), with other growth-sensitive sectors such as industrials and energy also performing strongly.  The Russell 2000 small-cap index has outperformed, up 2.9%.

US China tensions have not gone away

We’re still getting headlines of new antagonistic measures, but markets have continued to ignore these developments. Overnight, the Trump administration issued an order suspending passenger flights from China-based airlines, saying it was retaliation for Beijing barring American carriers from re-entering that market. The order stopped short of an outright ban, allowing Chinese carriers to operate one flight to the U.S. for each flight that China grants to American carriers. Reuters also reported the US plans to name more China media outlets as foreign mission tonight.

Global rates, which to this point have been largely unresponsive to the risk-on sentiment in other markets, have finally moved higher.  Looking at the intraday chart, the 10y UST yields accelerated its move higher once it broke above its previous high of 0.7130%, quickly trading to a high of 0.7639%, before settling at 0.7590%. That was an 8bps gain over the past 24 hours, taking the benchmark yield to its highest level since mid-April, following similar size moves in the European bond market.

Given the feel good backdrop in risk assets, the USD has continued to lose its safe haven bid, falling for a fifth consecutive day in index term. The BBDXY index is down 0.37% over the past 24 hours while DXY is -0.44%. JPY, the preeminent safe haven currency is the only G10 pair that has underperformed the USD, falling 0.34%. USDJPY now trades at ¥108.94.

Australia’s Q1 GDP data release revealed a  0.3% fall, as the pandemic saw large falls in spending and investment.  The outcome was broadly in line with market expectations and a little worse than NAB’s forecast. However, the small fall masks a large decline in private-sector demand caused by the pandemic, which intensified in only the final two weeks of Q1. This weakness was partly offset by a large contribution to activity from net exports, as imports collapsed at a faster rate than exports, and strong government spending,

Both the AUD and NZD printed their daily highs of 0.6983 and 0.6431respectively before the AU and China data releases. Indeed both currencies were losing ground as the AU Q1 data printed and then continued to fall after the China’s Caixin services PMI surprised to the upside. Price action may be suggesting both pairs might have gone a little too far too fast recently.

The Bank of Canada kept its policy rate and QE bond buying programme unchanged.  The Bank said it appeared the impact of COVID-19 on the global economy has peaked and the Canadian economy appeared to have avoided the Bank’s most severe downside scenario.  The Bank said it would reduce the frequency of some of its emergency operations, including its purchases of short-term bank paper and its term repo (collateralised lending) operations, due to the improvement in funding markets.  But it said it would maintain its QE bond purchases “until the economic recovery is well underway.”

Oil prices are trading at their highest levels since mid-March, when a price war erupted between Saudi Arabia and Russia.  The two countries have since mended ties and OPEC+ agreed to a record supply cut in April.  Those supply cuts were scheduled to start tapering from next month and the group had originally been planning to meet later this week, although there are now doubts around its timing.  Bloomberg reported overnight that Russia and Saudi Arabia had agreed to one-month extension to the current level of supply cuts but only on the precondition that other members abided by their individual quotas. 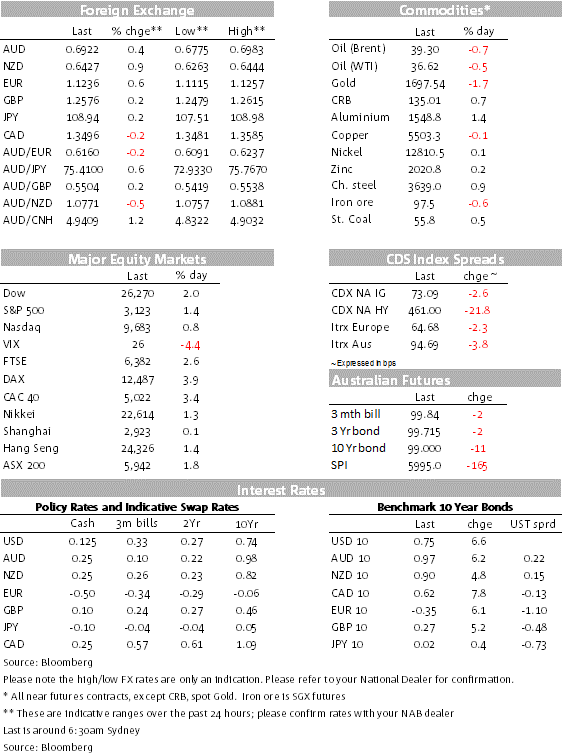 QE to continue, RBA to grapple with ending YCC.

AMW: Housing market activity soars but with little implications for the RBA

It’s Inauguration Day, or it will be when Wednesday eventually ticks round in the US.

Markets Today: Trump’s last day – how much will Biden undo?

Markets are looking through the prospect on any unrest on inauguration day, but the more immediate question is what will the President do today?