Trading has been thin as US markets closed for the 4th July holiday.

Why has the sky turned grey… Scarred by disgrace, I know that it’s over, Because I’m falling down – Duran Duran

It has been a quiet overnight session with the US out celebrating Independence Day. European equities and US equity futures edged a little bit higher while core yields in Europe continued to drift lower. 10y Bunds the highlight making a new record low at -0.402% and now trading below the ECB negative deposit rate. Currency moves have  also been pretty subdued with NZD the outlier, consolidating yesterday’s decline. Late yesterday the Coalition Government tax plan passed Parliament and is likely to be the domestic market focus today ahead of the all-important US payrolls report tonight.

With the US out on holiday the overnight session was unsurprisingly subdued, nonetheless it’s probably worth noting that European equity markets still managed to eke broad based modest gains. A look at the equity board shows all major EU equity indices closing in the green and notably too the EU Stoxx 600 index climbed another 0.1%, recording its sixth consecutive day of gains. Banks led the charge once again, up 1% while real estate shares also did well, increasing by 0.9%. Italian Banks were the main beneficiaries still enjoying some loving after Wednesday’s decision by the EU to hold off on disciplinary action for deficit infringements. On the other side of the Atlantic S&P futures also closed fractionally higher.

So while the picture from the EU equity market has remained upbeat, the mood in core EU bond yields is still reflecting major concerns over growth and inflation outlook. 10y Bunds closed at a new record low level of 0.4020% and now below the ECB negative deposit rate. The European 5 year swap in 5 years’ time (the so-called 5 year 5 year forward) fell to a fresh all-time low of 0.44% while the 5y5y OIS curve also made  a new low of 0.2641%. Market pricing is very much consistent with a “Japanification” of Europe – i.e. near-permanent negative or zero interest rates amid high savings rates and low inflation.

Comments from ECB policymaker, and Finnish central bank Governor, Olli Rehn did nothing to temper market expectations for further monetary stimulus from the ECB in the coming months.  Rehn said the slowdown in growth in the Euro zone could no longer be considered a “temporary dip” and he batted away suggestions that the ECB was running out of policy ammunition.  In terms of rate cuts, Rehn said the ECB would consider measures (i.e. tiering) to mitigate the side-effects on the financial system and added that there was a “certain degree of flexibility” around the ECB’s restrictions on QE holdings (currently, the ECB limits itself to buying only up to 33% of any country’s bonds, with several countries very close to that limit).

Speaking at a conference in Frankfurt, new ECB chief economist Philip Lane didn’t offer much policy guidance, but he did make a comment on productivity noting that despite the promise of increased efficiencies thanks to digital technologies, the productivity growth that we have seen in Europe, and indeed most advanced economies, has been lackluster for more than two decades”.

Looking at the FX world, unsurprisingly moves have also been pretty subdued with all G10 currency pairs essentially marking time ahead of US payrolls tonight. The USD is little changed in index term (DXY at 96.73 and BBBDXY at 1189) and within G10 all pair baring NZD are within +/-0.1% from levels recorded this time yesterday. NZD is the outlier, consolidating its move lower late in our session yesterday and now trading at 0.6685, 0.31% lower over the past 24 hours.

After trading to an intraday high of 0.7048, the AUD is essentially unchanged at 0.7024. The 0.7050 level remains an obstacle for the pair and given a quiet domestic calendar it all, focus is likely to be on the USD fortunes after non-farm payrolls tonight. There was little reaction to yesterday’s Australian data which included a weaker than expected retail sales release and a fall in job vacancies that our economists see as pointing to a slowdown in future employment growth.

AU Retail trade barely grew in May, with the value of sales up only 0.1% (NAB & consensus: 0.2%) after a 0.1% decline in April. Sales are up 0.4% in Q2 to date, which follows a 0.7% increase in Q1.  Adjusting for a likely gain in retail prices, this suggests that real retail trade could be flat-to-down in Q2 after falling slightly in Q1 and stagnating in Q4 last year.  This will weigh on Q2 GDP, although keep in mind that retail will soon benefit from the government’s personal income tax cuts, which take effect this month.

Late yesterday Australia’s Coalition government passed its tax plan through Parliament. This means that single income earners will collect up to $1080 in tax relief while dual-income families could get up to $2160 once they have lodged their 2018-19 tax returns. Those earning between $48,000 and $90,000 receive the full $1080 offset, with the tax cut tapering off for taxable incomes of $90,000 to $126,000. While good news for the consumer, our economists note that the tax relief equates to about 0.3% of annual GDP, where the net boost to growth is likely to be a little lower given survey data suggest some households may save part of the tax cuts while some spending will be on imports.

Amid a quite economic calendar during our APAC session, the focus tonight will be on the June US non-farm payrolls release. The market is looking for a rebound in non-farm payrolls after a disappointing 75k print for the month of May. According to Bloomberg the median estimate for June is for a 162k increase in jobs. A number in line with expectations is unlikely to deter market expectations for a Fed funds rate cut at the end of July. To some extent the Fed’s debate is really about whether a 25 or 50bps rate cut is in the offing and a soft print will most likely  encourage the market to increase its expectations for a 50bps cut. The market is currently pricing a decline of 33bps in the funds rate, suggesting a 25bps cut is baked in the cake while a 50bps rate cut has a probability of around 30%. 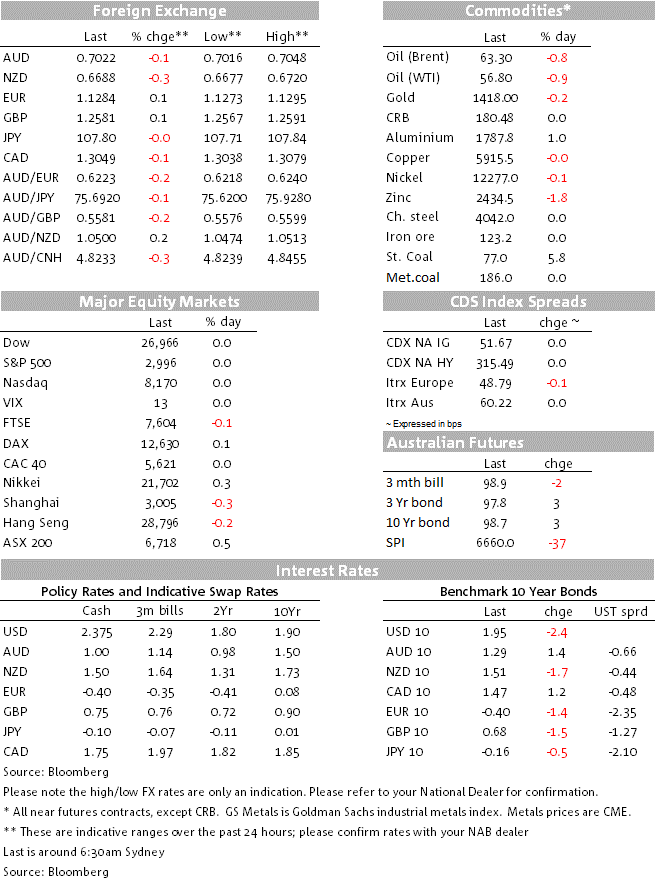