Markets Today: US against the rest

Overnight we saw rising US share indices and a strengthening dollar.

Overview: The land of opportunity

Stronger US economic data releases alongside solid US earnings reports have boosted risk appetite with President Trump’s executive order restricting Huawei and other Chinese telecos showing limited negative effects. The USD is stronger across the board with the AUD the big underperformer following yesterday’s rise in Australia’s unemployment rate. By association NZD has also underperformed while GBP has continued its descend after embattled PM Theresa May announced a timetable to step down. Influential Fed Board member talks up the idea of higher inflation tolerance as “opportunistic reflation”.

US equities have closed in positive territory for a third consecutive day (S&P 500+0.89% and NASDAQ +0.97%) boosted by solid US economic and better  earnings from Cisco and Walmart.

All S&P 500 sectors closed higher on the day with the semiconductors sub sector (-1.55%) the glaring exceptions, reflecting the negative impact from yesterday’s news after the bell that that President Trump had signed an executive order aimed at restricting Huawei and other Chinese telecommunications company from selling their equipment in the US. The news was followed by the US Department of Commerce decision to put Huawei on a blacklist that effectively forbids it from doing business with American companies (US companies will now require licenses to purchase Huawei products). China criticised the US decisions and as it has become the norm it said that it would take “necessary measures” to protect its companies, although we do not know yet what that will entail.

So in the end solid US data releases and earnings have carried the day, but it is hard to get too excited as the news flows in the trade front points to an escalation rather than an ease in tensions. Many commentators and US conservative politicians are now suggesting the US decision on Huawei and other Chinese telecos effectively means the President has taken the “nuclear option” and it has now move towards a “fully-fledged” tech war with China.

Following on from yesterday’s stronger Empire manufacturing survey, the Philly Fed survey rose to 16.6, above market expectations and close to its highest level of the year.  The shipments and employment components rose, although there was a modest fall in new orders.  It’s been a good start to the month for the regional Fed manufacturing surveys, which bodes well for an improvement in the ISM survey released early next month.  Meanwhile, housing starts and building permits beat expectations, providing further evidence (alongside yesterday’s stronger than expected NAHB survey) that the US housing market is starting to pick-up again (probably in response to the previous falls in mortgage rates).

The solid US data helped US treasury yields move up from their lows with the front end of the curve leading charge, flattening the curve. The 2y rate now trades at  2.198%, 3.5bps higher relative to yesterday’s level while the 10y rate is at 2.395%, 2.50bps higher on the day , after initially trading down to 2.35% late in the Asian session yesterday.

The better US data, suggesting the US growth outperformance is likely to last for a while longer has helped the USD outperformed across the board. BBDXY and DXY are up just over 0.3% on the day and both are back knocking on the upper-end of recent trading ranges.  DXY now trades at 97.837 while BBDXY is at 1205.

The AUD has been the major underperformer within G10 over the past 24hrs following yesterday’s move up in the unemployment rate from 5.1%  (revised up from 5.0%) to 5.2% while the underemployment rate rose sharply to 8.5% from 8,2%, the highest since July 2018. The AUD now trades at 0.6982, after trading down to an overnight low of 0.6892. So the bearish theme of lower lows continues this week, the AUD remains vulnerable to the downside and ignoring the Jan 3 flash crash low of 0.6741, the market will now probably look at the mid Jan-2016 lows of 0.6827 as the next key support for the pair.

While in some respect yesterday’s Labour force report could be characterised as a mixed bag, given that on the positive side the data revealed 28.4k news jobs in April (+34.7k part time, -6.3k full time) alongside an uptick in the participation rate to 65.8% (equalling the multi-year high), from a policy perspective the RBA emphasis has always been on the unemployment rate (and to a lesser extent the underemployment rate), given that the jobs data can be quite volatile in nature. At its early May board meeting the RBA said ”a further improvement in the labour markets was likely to be needed for inflation to be consistent with the target”, with the board “paying close attention to developments in the labour market at its upcoming meetings”. In the Statement on Monetary policy, the Bank also said that it will look at leading indicator in the labour market in its assessment. Arguably then the uptick in the unemployment rate means that along with the additional weakening in forward looking indicators (for instance: employment sub- indices in the NAB survey this week and SEEK Job Ads this morning- 10% down in April ), the two necessary conditions for the RBA to cut have been met or we are now very close to meeting them. Market pricing pointing at a 75% probability suggest we are almost there too (from around 40% pre-release).  Focus will now turn to Governor Lowe speech next week Tuesday in Brisbane titled “The Economic Outlook and Monetary Policy – at the Economic Society of Australia” –Given the topic of his speech it would seem hard for the Governor to avoid a rate cut question.

The GBP has again underperformed after embattled PM Theresa May announced a timetable to step down.  May said she will outline her plans to resign after a parliamentary vote on the withdrawal agreement in early June.  According to reports, if she loses that vote, she will resign immediately.  If she wins the vote, which will almost certainly require assistance from Labour and an agreement reached with Labour leader Corbyn, she will attempt to pass the bill into law before the end of July, after which she will stand down.  Arch-Brexiteer Boris Johnson confirmed what everyone already knew – that he intended to put his name forward for the leadership contest.  The GBP is 0.3% lower on the day, at 1.28, its lowest level since February.

Influential Fed Governor Brainard raised the possibility of “opportunistic reflation”, whereby the Fed tolerates a slight overshoot of its 2% target, in a speech overnight.  Interestingly, Brainard gave the example of an unexpected increase in core import price inflation, which seems entirely realistic given the threat of tariffs.  Brainard noted that “the Federal Reserve could use that opportunity to communicate that a mild overshooting of inflation is consistent with our goals.”  That certainly reinforces the view that the Fed will be far more focused on the growth implications of a US-China trade war than the inflationary side.  Brainard also said she thought the softening in US core inflation recently likely reflected at least some softening in the underlying trend, rather than being entirely due to “transitory shocks”. Hard to disagree with Brainard assessments, but critics would point that that the BoJ has been here before and talks of higher inflation tolerance have had little effect in materially lifting inflation in Japan. Watch this space.

Speaking earlier in the session Fed’s Kashakri a non voter this year – said the Fed raised rates too early and caused inflation to be lower than it might have been, engineering what was likely too slow a recovery in the labour mkt. “Monetary policy has been too tight in this recovery.” 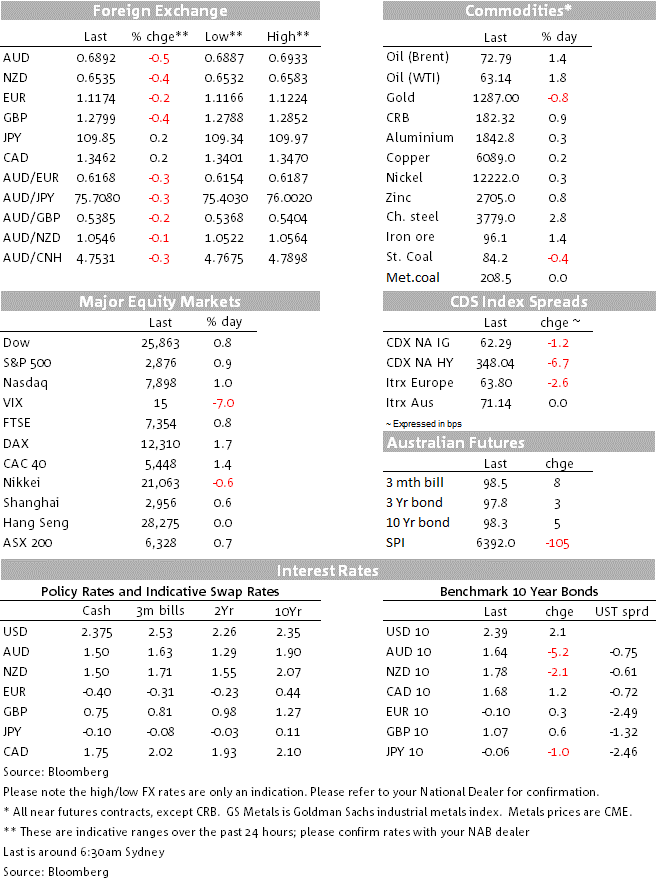